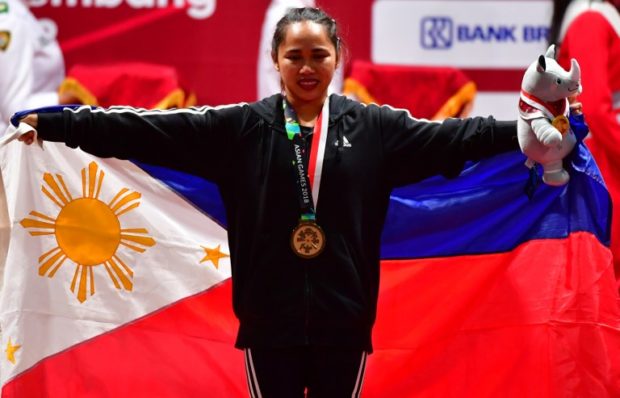 Hidilyn Diaz of Philippines celebrate at the podium during the victory ceremony for the women’s 53kg weightlifting event during the 2018 Asian Games in Jakarta on August 21, 2018. / AFP PHOTO / MONEY SHARMA

Spotlight falls on women power when the Philippine Sportswriters Association (PSA) honors the best of 2018 during its Annual Awards Night at The Manila Hotel on Feb. 26.

For giving the country four gold medals in the 18th Asian Games in Indonesia last year, Hidilyn Diaz, Yuka Saso, the women’s golf team and Margielyn Didal will be bestowed Athlete of the Year Award by the sportswriting community in the San Miguel Corporation-sponsored event. Gold medallist Margielyn Didal of the Philippines gestures during the victory ceremony for the women’s skateboard street event during the 2018 Asian Games in Palembang on August 29, 2018. AFP FILE PHOTO

Diaz topped the women’s-53kg event of weightlifting, Saso emerged individual champion in golf and steered the women’s team to the same finish, while Didal ruled the street skateboard competition which made its Asiad debut. Yuka Saso of the Philippines celebrates winning the gold medal on her last putt during the final round of the women’s individual golf event at the 2018 Asian Games in Jakarta on August 26, 2018. (Photo by PETER PARKS / AFP)

The four golds were the most since the quartet of Antonio Gabica, Violito Payla, Joan Tipon, and Rene Catalan won as many during the 2006 Doha Asiad.

Bemedalled gymnast and taekwondo jin Bea Lucero-Lhuillier will be a guest speaker.