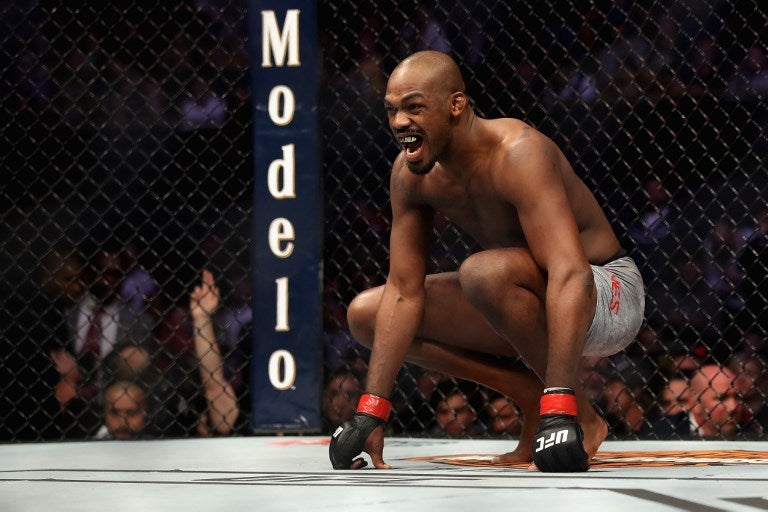 FILE – Jon Jones looks prior to a Light Heavyweight titlebout against Alexander Gustafsson of Sweden during the UFC 232 event inside The Forum on December 29, 2018 in Inglewood, California. Jones defeated Gustafsson by KO. Sean M. Haffey/Getty Images/AFP

Reigning UFC light heavyweight champion Jon Jones was given a one-fight license Tuesday by the Nevada State Athletic Commission to compete against Anthony Smith at UFC 235 in March.

After more than three hours, officials granted the rare license but attached several conditions for Jones if he wants another bout in Nevada.

The 31-year-old American will be required to be drug tested at least twice a month until UFC 235, then comply with a similarly rigorous testing schedule for the remainder of 2019 in order to fight in Nevada again.

Jones tested positive for trace amounts of a long-term metabolite of the anabolic steroid Turinabol multiple times in 2018, then tested negative in four consecutive drug tests from September to November before another positive test last month.

That prompted UFC to move its December 29 show from Nevada, which would not license him after the positive, to California, where Jones was allowed to fight on short notice with extra drug testing, as California officials concluded the new positive tests and others with trace amounts before the fight were from a 2017 violation for which he had served a 15-month suspension.

Jones, a three-time banned fighter, recaptured his title with a third-round stoppage of Alexander Gustafsson.

Now his future depends on staying clean outside the Octagon as well as how he performs inside it.

“This is on you. It’s on your shoulders,” commissioner Anthony Marnell told Jones. “I like what I hear, I like what I see, but the proof is in the pudding.

“I’m happy you are back here. You will always be treated with respect here and I wanted to make sure that you understood that. Welcome back to Nevada and do the right thing from this point going forward. As you know, we’re going to be visiting you frequently.”

The US Anti-Doping Agency, in a statement, said it found the samples in Jones’s positive tests to be residual based on amounts and said they provided no chance of performance enhancement.

“We agree with and support the NSAC decision today to license Jon Jones to fight in Nevada and while USADA does not have jurisdiction over the licensing, we appreciate being able to collaborate with the NSAC to ensure a fair outcome,” USADA said.