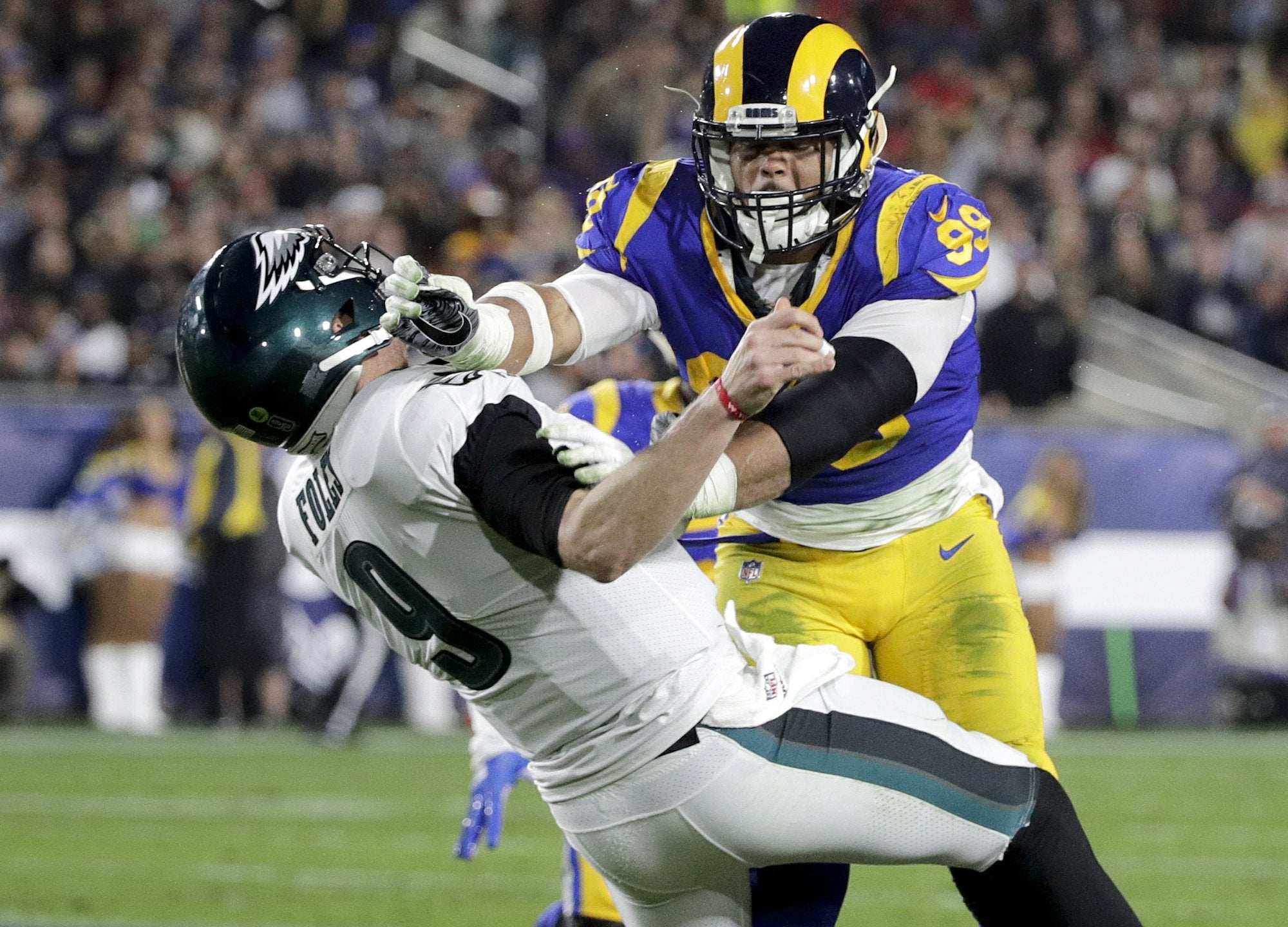 FILE – In this Dec. 16, 2018, file photo, Los Angeles Rams defensive end Aaron Donald hits Philadelphia Eagles quarterback Nick Foles after Foles threw the ball away during the first half in an NFL football game in Los Angeles. The Rams know they’ve got to pressure Tom Brady early and often to have a chance in the Super Bowl, and they’ve been assembling the tools for this job all year long. They signed Ndamukong Suh to a big free-agent deal, wrote a record-breaking contract for Aaron Donald and acquired edge rusher Dante Fowler from Jacksonville down the stretch. (AP Photo/Jae C. Hong, File)

ATLANTA — Hey, have you guys been here before?

If you’re a New England Patriot, the answer pretty much is “all the time.”

If you play for the Rams, the reply basically is “never in my life.”

So if experience is a factor in Sunday’s Super Bowl, the overwhelming edge is with the 2½-point favorites from Foxborough who are 5-3 in NFL title games with Tom Brady at quarterback and Bill Belichick in the hoodie on the sideline.

The Rams, whose past two Super trips were representing St. Louis in 2000 and ’02, have four players who have gotten this far. New England has four on its defensive line alone.

“Probably, throughout the week, it gives them an advantage,” Rams tackle Andrew Whitworth says — and he’s finishing up his 13th NFL season, though it’s his first that ends in February.

“They kind of know this week. They know when things are a little anxious, when to kind of, ‘Hey, turn it on and get ready to play.’ They probably have a process and plan for the week.”

Athletes in every sport talk about how helpful a comfort zone can be. It’s even more pronounced when it accompanies events such as the Super Bowl, which, for better or worse, transcends football.

Brady and most of his teammates, in their third straight visit, barely flinch at all the attention, media demands and alterations to the norm they encounter during Super Bowl week — although they were taken aback somewhat by the cacophony and circus atmosphere of opening night on Monday. Aside from Aqib Talib, C.J. Anderson, Brandin Cooks and Sam Shields, for the Rams this is uncharted territory.

Rams coach Sean McVay tends to dismiss that theory, however. Using quarterback Jared Goff as an example, McVay could have been speaking for his entire squad, which has made a sensational turnaround in his two seasons in charge.

“He’s an unfazed quarterback,” McVay says. “I think his way to have success and handle adversity the same demonstrates that poise and confidence you want from your quarterback.”

Nowhere is the experience matchup more uneven than at QB. At 41, Brady already is the oldest quarterback to start a Super Bowl. Goff is 24 and one of the youngest.

Well, maybe nowhere is an exaggeration, because Belichick, at 66, could become the oldest coach to win a Super Bowl. He has worked 41 postseason games, with 30 victories, most among head coaches in NFL history. He’s the only head coach with five Super Bowl rings.

McVay is half his age and in his first NFL title game, the youngest Super Bowl head man.

Rams President Kevin Demoff hears all of that so-called evidence, then cites so many positives about McVay that he sounds like the next dominant coach.

Sunday will be a powerful acid test for McVay and his team.

Some other things to look for in Super Bowl 53:

There’s widespread speculation that Patriots star tight end Rob Gronkowski could be playing his final NFL game. The four-time All-Pro has been plagued by injuries for much of his career, and only in his first two pro seasons did he play a full 16-game schedule. In 2018, he made it into 13 games.

Gronkowski has battled through back, knee, ankle and arm injuries throughout his nine pro seasons, and thought about retirement after last year’s Super Bowl loss to the Eagles. If this will be it for the big-play tight end with superb blocking skills, he isn’t letting on.

“As of right now, those are the last things I’m thinking about,” Gronkowski says. “I love playing the game. After a long season, after the (Super Bowl), a few weeks down the road, you sit back, you relax, you get some downtime, enjoyment time. And you just see where you want to go with it.

“That’s a tricky question. You’re trying to get around me. You’re just trying to get you some answers over there, baby. But like I said, I don’t know. I haven’t done that sit-down yet. I’ve got to do that sit-down. About two weeks after (the Super Bowl), then I’ll know.”

Rams defensive tackle Aaron Donald, the only unanimous All-Pro this season, led the NFL with 20½ sacks.

Considering that Brady barely has been touched or pressured in two playoff games — both against teams with strong pass rushers — it is incumbent upon Donald to be a factor Sunday.

Make that a major factor.

“We’ll get to him, but we have to stay patient and don’t get frustrated,” Donald says. “We’ve got a great secondary that will do its job and make sure he doesn’t have easy throws. If he has to hold onto the ball, we’ll have our chances. We just have to go get him.”

Otherwise, the most accomplished quarterback in Super Bowl history might tear them apart.

The Rams’ past two trips to the big game were tight affairs in which they beat Tennessee and lost to New England. In all of the Patriots’ eight previous trips in the Brady-Belichick era, the result was in doubt until the final moments.

So to expect a romp at Mercedes-Benz Stadium seems foolhardy.

“It would be nice to get one of those,” Patriots receiver Chris Hogan. “But the idea is to win, no matter how you do it.”

The largest margin in a Patriots Super Bowl under this regime has been the eight points the Eagles beat them by a year ago.