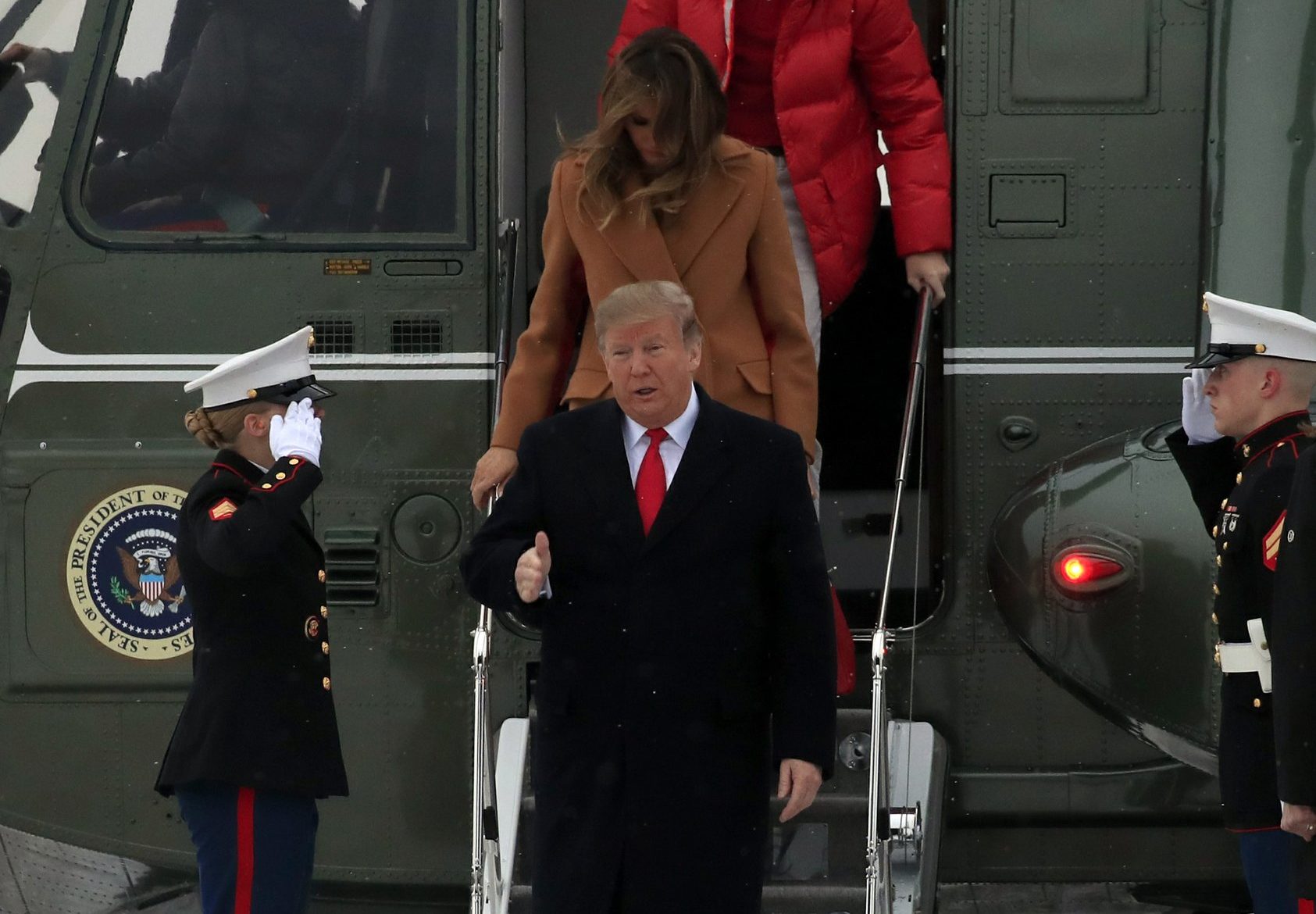 President Donald Trump walks with his wife first lady Melania Trump and their son Barron Trump on the tarmac of Andrews Air Force Base, Md., to switch from Marine One to Air Force One that will take the first family for the weekend at his Mar-a-Lago estate in Palm Beach, Fla., Friday, Feb. 1, 2019. (AP Photo/Manuel Balce Ceneta)

WEST PALM BEACH, Fla. — President Donald Trump claimed that “a lot of people” from the NFL have been calling and thanking him for signing legislation addressing concerns with the criminal justice system.

Trump also said during an interview broadcast Sunday that he and NFL Commissioner Roger Goodell have set aside their differences over players kneeling during the national anthem.

Trump relentlessly criticized the practice as being disrespectful to the American flag and he faulted Goodell for not doing enough to stop it. Players saw kneeling during the “Star-Spangled Banner” as a prime opportunity to heighten public awareness of how minorities are treated by the criminal justice system.

The president pivoted to the new criminal justice law when he was asked if he thought the players who knelt had a point, and whether he was sensitive to their concerns that most victims of police violence are black. Trump said the legislation was the product of years of effort dating to before he took office.

The law gives judges more discretion when sentencing some drug offenders and will boost prisoner rehabilitation.

Trump then segued to his stance on kneeling during the anthem, without addressing the original question.

The White House did not respond to emailed requests for information on which NFL figures have reached out to the president.

Asked whether he and Goodell had set aside their differences over kneeling, Trump said: “I think so … You have to respect our flag and our country. I want that as president. And I’d want that as a citizen and I have a very good relationship.”

Trump viewed Sunday’s matchup between the New England Patriots and the Los Angeles Rams from the comfort of his private golf club in West Palm Beach. Upon arrival, he and his wife, Melania, were treated to a mini-concert by the Florida Atlantic University Marching Band.

Trump said in the interview that he expected the Patriots to win a sixth Lombardi Trophy — and they did, 13-3 — and visit the White House. The team is owned and coached by his friends, Bob Kraft and Bill Belichick, respectively.

He credited “great chemistry” for the team’s success.

Trump also complained in the interview about the New Orleans Saints’ loss to the Rams in January’s NFC title game.

Game officials failed to call interference or roughness penalties when a Rams player delivered a helmet-to-helmet hit on a Saints receiver in the game’s crucial final minutes. The Rams won in overtime, advancing to meet the Patriots at the Super Bowl in Atlanta while the league acknowledged a blown “no-call.” A federal judge later rejected a legal challenge by two Saints ticketholders seeking a do-over playoff game.

Trump blamed the outcome on a “bad call.”

“It’s a shame that we couldn’t have seen that game finished out, because that was a beautiful pass. And it was a perfect pass. And he was not just interfered with, he was, he was really hit hard,” the president said. “So it’s a shame that that had to happen. Who really knows what would have happened in the end?”

He said the Saints would have been in a good position to have won the conference title.