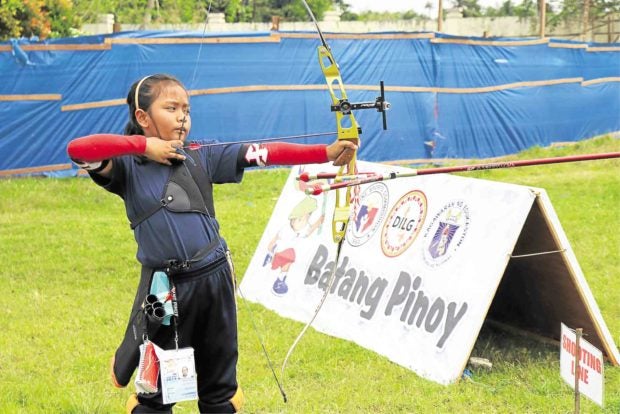 TAGUM CITY—Romee Jonathan Rioja had little expectations knowing that the wind and drizzle on the archery range won’t be friendly to a first timer.

The 7-year-old from Koronadal City shrugged off the unfavorable condition and compiled 551 points after two rounds to claim the gold medal in the 20-meter yeoman boys’ event on Monday in the Mindanao leg of the 2019 Batang Pinoy Games.

“This is the first time I joined a competition,” said Rioja in Filipino after pooling together scores of 244 and 307 to subdue Karl David Mejillano of South Cotabato (497) and Paul Yrwan Bader (404), a fellow Koronadal archer.

“I didn’t expect this,” added the second grader from Koronadal Central Elementary School.

Unlike Rioja, Basadre is at his third Batang Pinoy Games, organized by the Philippine Sports Commission and the province of Davao Del Norte and supported by STI and Alfalink Total Solutions.

“My target is to get more gold medals,” said the 12-year-old Endaya, who is also vying to rule the Olympic round and mixed disciplines.

A day after her 10th birthday, Signacion fired 328 points in the initial round and capped the impressive performance with 319 in the second round to compile 647 points on the way to a golden finish.

“I thank my mother for encouraging me to play this sport,” added Signacion.

Endaya, Signacion’s schoolmate at Surallah Central Elementary School in South Cotabato, is on her third year in the sportsfest for athletes 15 years old and younger.