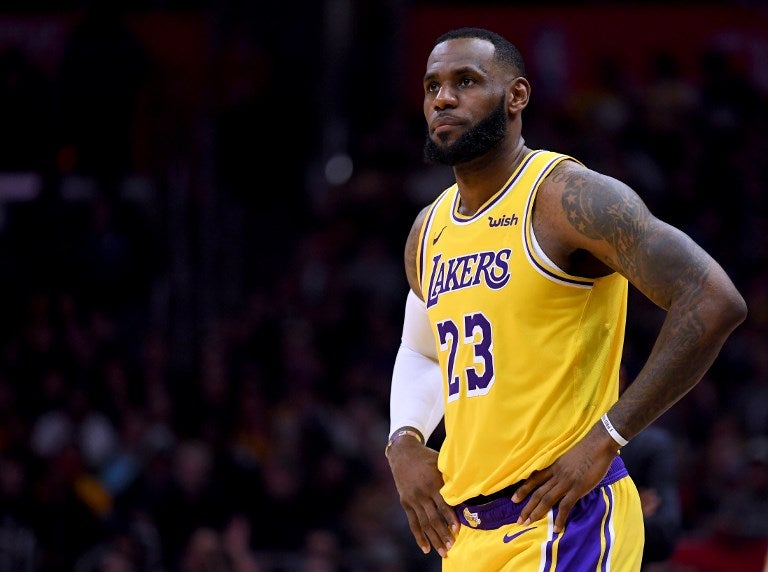 LeBron James #23 of the Los Angeles Lakers waits to enter the game during a 123-120 win over the LA Clippers at Staples Center on January 31, 2019 in Los Angeles, California. Harry How/Getty Images/AFP

LeBron James rejected suggestions Thursday he was the driving force behind the rebuilding of the Los Angeles Lakers after a week of intrigue surrounding the franchise’s attempts to lure Anthony Davis from New Orleans.

Speaking ahead of the Lakers’ visit to the Boston Celtics later Thursday, James suggested he was in no hurry to assemble a Lakers side capable of challenging for championships.

“There’s nothing I need to get in this league that I don’t already have,” James told reporters during a shootaround at the TD Garden. “Everything else for me is just like icing on the cake.

“I love the process of everything I go through to be able to compete every single night and put teams in position to compete for championships. But there’s nothing I’m chasing or feel like I need to end my career on.”

During the Lakers 136-94 thrashing by Indiana this week, Pacers fans taunted Ingram with chants of “LeBron’s gonna trade you” during the game. JaVale McGee was mocked with chants of “Not worth trading.” Lakers fans take pictures of LeBron James #23 of the Los Angeles Lakers before the game against the Boston Celtics at TD Garden on February 07, 2019 in Boston, Massachusetts. Maddie Meyer/Getty Images/AFP

James on Thursday was non-committal on whether the speculation was adversely affecting the morale of his Lakers team-mates.

“That’s a question for those guys,” he said. “It’s just all part of the business, and when you truly understand that, and you truly know this is a business, but you give 110 percent to whatever situation you’re in, then you’re able to live with it.

“But I know this has to be tough on guys that for the first time in their career, especially if you’re a young guy, to hear your name in trade rumors when you’ve been somewhere for a few years.”

Late Wednesday he had been sharply critical of the trade which saw Harrison Barnes sent to the Sacramento Kings from the Dallas Mavericks. News of the deal broke while Barnes was playing on court.

James said Thursday the move underscored the flipside of the NBA business. While teams often act ruthlessly in their own interests without reproach, players seen as agitating for a move were portrayed as selfish or greedy.

“Teams have to do what’s best for the franchise to set them up for the future or the near present, and I agree with that,” James said.

“But at the same time players have to have that ability to do what’s best for them as well. So if a player decides he’s a free agent and wants to leave, that should be part of the same conversation, the same narrative.

“And not that this guy or this kid is being selfish or unfaithful. We only have so many years to play the game and you want to maximise it as much as possible. I see it on both sides.”