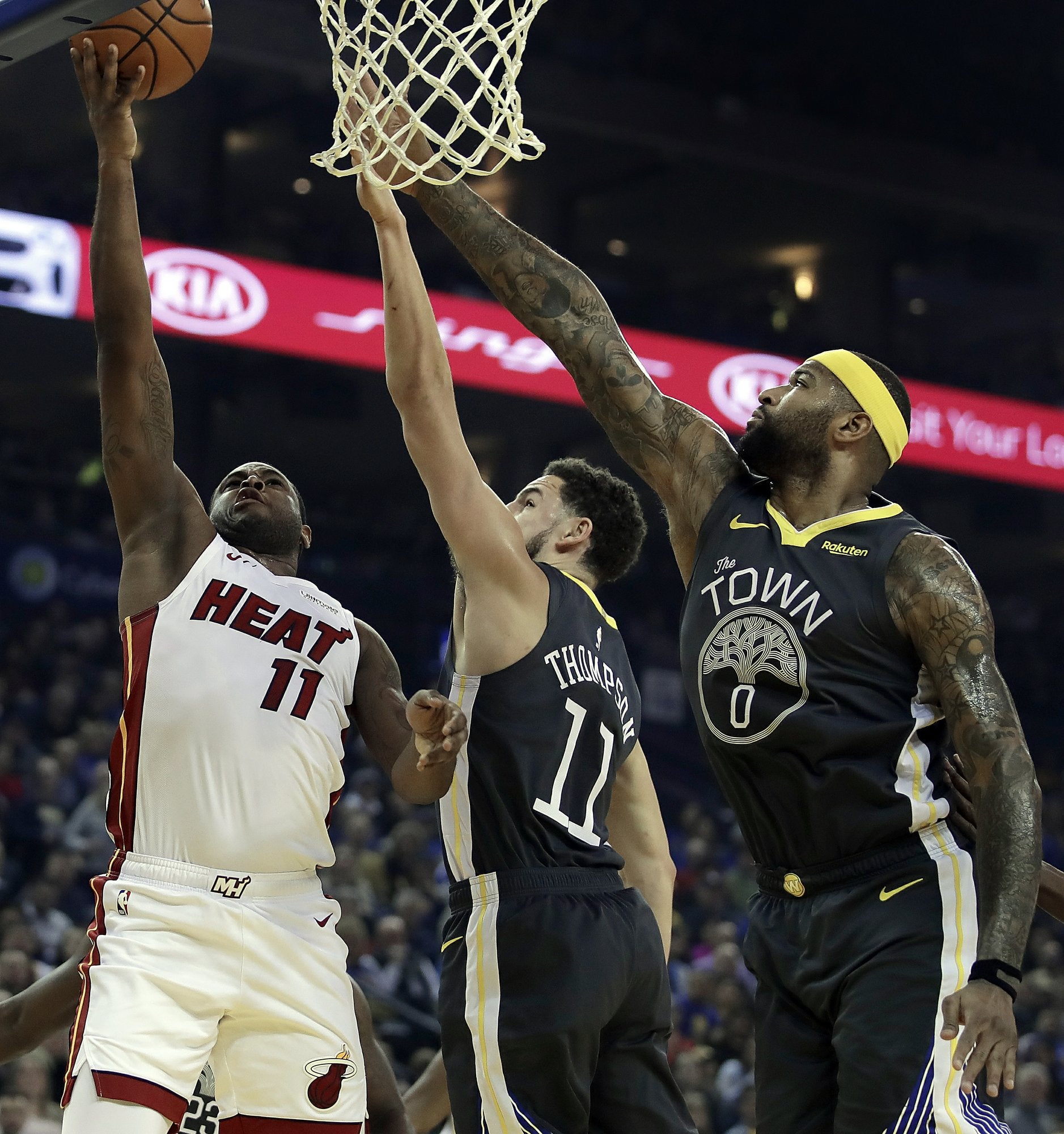 OAKLAND, Calif. — Kevin Durant scored 39 points and DeMarcus Cousins made two free throws with 5.4 seconds to play that helped the Golden State Warriors cap a comeback from a 19-point deficit in the first quarter to beat the Miami Heat 120-118 on Sunday night.

Cousins rebounded a missed 3-pointer by Durant and drew a foul, setting the stage for his winning free throws that gave the Warriors their 11th double-digit comeback of the season, and second straight after rallying from 17 points down in the first quarter Friday in Phoenix.

Miami overcame an eight-point deficit in the fourth quarter to tie the game on a 3-pointer by Justise Winslow. Josh Richardson and Dwyane Wade then had back-to-back steals and layups to put the Heat up 118-115 with 51.5 seconds to play.

Durant then tied it with a 3-pointer and Cousins made his big shots after both teams missed from long range to give the Warriors their 15th win in 16 games.

Richardson helped shoot Miami to the big early lead and finished with a career-high 37 points with help from eight 3-pointers. Waiters added 24 and Winslow had 22 in Miami’s fifth loss in six games.

The Warriors went on a 12-0 run early in the third quarter starting with a 3-pointer from Curry to take a 66-61 lead. But Miami wouldn’t go away and the Warriors needed to fight until the final horn to secure the win.

The Heat went on a 24-2 run early in the first quarter and quickly built a 19-point lead against the slow-starting Warriors. But Golden State scored the final six points of the frame, including a 3-pointer from Jonas Jerebko to cut the deficit to 10 points after one.

Heat: Wade played despite a scary fall Friday in Sacramento that left him with a bruised back. “Any one of us would probably be in a body brace right now. But he’s built like Captain America,” coach Eric Spoelstra said. Wade got a standing ovation following a video tribute during the first quarter timeout in his final regular season game in the Bay Area before retiring after the season. Wade finished with 10 points.

Warriors: F Andre Iguodala sat out after tweaking his left hamstring on Friday. … The Warriors have scored at least 100 points in 26 straight games, their longest streak since a 36-gamer in 2016-17. … Draymond Green was called for his 11th technical foul early in the fourth quarter when he wanted a goaltending called when Bam Adebayo blocked Shaun Livingston’s shot. Durant was called for his 10th later in the quarter.

The Warriors have grown tired of talk about NBA free agency, but coach Steve Kerr was happy to chime in when it came to baseball’s market. When asked about the possibility that free agent slugger Bryce Harper could sign with the San Francisco Giants, the noted Los Angeles Dodgers fan was all in favor of it.