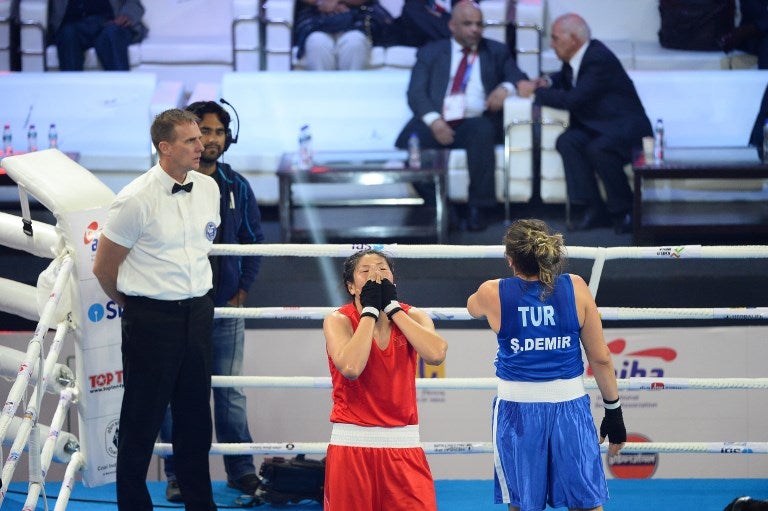 Xiaoli Yang of China (in red) reacts after her win during the +81kg category final fight at the 2018 AIBA Women’s World Boxing Championships in New Delhi on November 24, 2018. (Photo by Sajjad HUSSAIN / AFP)

Boxing chief Gafur Rakhimov says he “understands” IOC concerns over the troubled AIBA which has led to a freeze on the sport’s preparations for next year’s Tokyo Olympics.

The Uzbek businessman laid the blame for “an extremely serious” situation squarely at the door of previous president Wu Ching-Kuo.

“The former leadership of AIBA left our organization in a complete mess, not only financially but also in terms of governance, anti-doping and refereeing,” he claimed.

Boxing’s Tokyo fate depends on the outcome of an investigation into the AIBA by the International Olympic Committee.

The IOC has presented the body with a list of 41 questions via audit firm Deloitte, who will then report back to the IOC.

Rakhimov boasted that under his leadership the AIBA has “improved dramatically on all fronts”.

“AIBA members and boxers from around the world should be proud of this,” he added, declaring that the organization “is healthy now and in better shape than ever before”.

He urged the IOC to end the uncertainty over boxing’s presence in Tokyo.

“Our boxers are waiting, they need to know when, where or how to qualify for the Olympic Games next year. They must be the priority of everybody!”

Relations between the IOC and AIBA were hit hard at the 2016 Rio Olympics when 36 officials and referees were suspended amid allegations of bout fixing.

Rakhimov’s election in November also caused friction as the US Treasury Department has linked him to “transnational criminal organizations”, a charge he vehemently denies, calling his presence on the list “a mistake”.