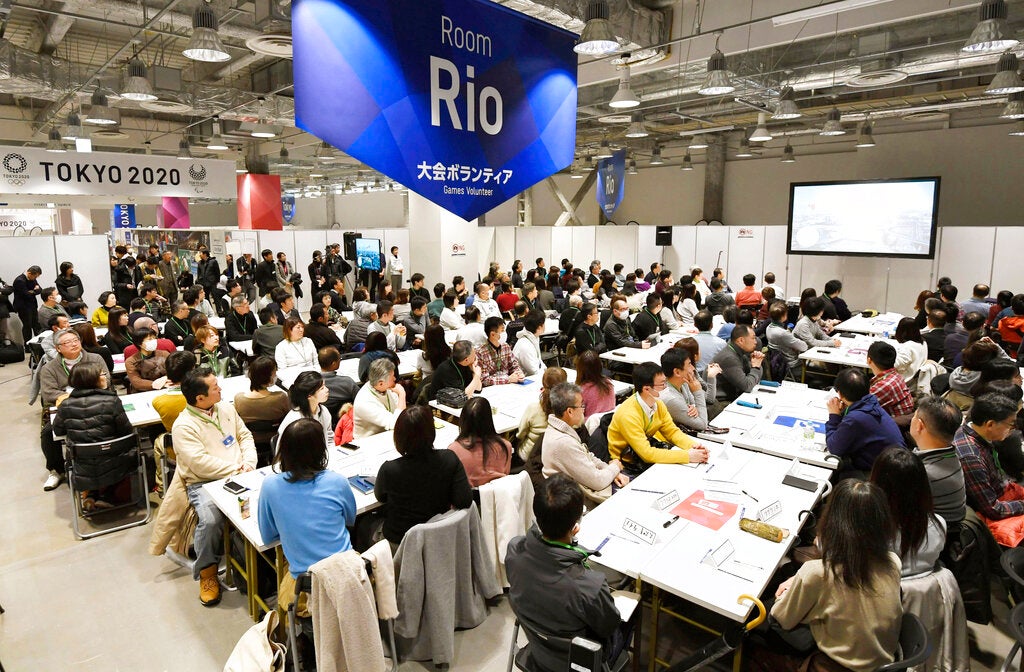 In this Feb. 9, 2019, photo, invitees listen during an orientation for volunteers for the Tokyo 2020 Olympics and Paralympics in Tokyo. Unpaid Olympic volunteers do almost everything: guide athletes around, greet dignitaries, and translate for lost fans. IOC officials acknowledge the games couldn’t be held without them; invariably smiling, helpful and praised by presidents, prime ministers, and monarchs. That’s the case at next year’s Tokyo Olympics and Paralympics where about 80,000 will be needed. Just over 200,000 have applied with orientation and interviews for Japan residents starting this month. (Mizuki Ikari/Kyodo News via AP)

IOC officials acknowledge the games couldn’t be held without them; invariably smiling, helpful and praised by presidents, prime ministers and monarchs.

The billion-dollar Olympics are awash with cash. But volunteers work for free. That’s the case next year at the Tokyo Olympics and Paralympics, where about 80,000 volunteers will be needed. Just over 200,000 have applied with orientation and interviews for Japan residents starting this month.

Most don’t seem to mind, thrilled about a once-in-a-lifetime chance and largely unaware that their unpaid labor enriches Olympic sponsors, powerful TV networks, and the Switzerland-based International Olympic Committee.

“To me, it’s very clearly economic exploitation,” Joel Maxcy, the president of the International Association of Sports Economists and a professor at Drexel University in Philadelphia, told The Associated Press.

Maxcy described a situation in which volunteers assemble the product but “someone else is collecting nearly all of the money derived from those labor efforts.”

Volunteers are lured by the powerful Olympic brand, the glamor of being behind the scenes, a sense of altruism and, for younger volunteers, a hope the work might lead to connections and a full-time job.

“I’m willing to work for free if I can get a chance to see and talk to Olympians from all over the world in person,” Yutaro Tokunaga, who attended a recent Tokyo orientation for volunteers, told the AP. The 26-year-old said his employer is giving him five days of paid Olympic leave.

One aspiring volunteer, Masanobu Ishii, said he wanted to convey the spirit of “omotenashi,” which translates as showing Japanese hospitality.

Volunteers also get involved out of civic duty or patriotism — and the chance to brag to friends. Many older volunteers often don’t need the money.

California-based labor economist Andy Schwarz suggested some volunteers would even pay to play.

“It’s easy to imagine the Olympics charging for the right to help if the honor were high enough,” Schwarz said.

Olympic volunteers typically pay their own lodging and transportation to the host city. They get meals on the days they work, some training and uniforms to treasure. In Tokyo, they will get up to 1,000 yen daily (about $9) to get to work on the city’s vast train system. Tokyo organizers also provide some insurance. Almost two-thirds of the applicants for the Tokyo Olympics are Japanese, and almost two-thirds are women.

A study done for the IOC on volunteers at the 2000 Sydney Olympics said their value was at least $60 million for 40,000 volunteers. Now, 20 years later, Tokyo organizers will use twice that many.

Separately, the Tokyo city government will field another 30,000 unpaid volunteers.

Proponents argue volunteers embody the spirit of the games, harkening to a time almost 50 years ago when Olympic athletes were unpaid amateurs. The IOC champions their use despite some complaints on social media in Tokyo that volunteers are similar to “forced labor.”

IOC member John Coates, who heads the inspection team for Tokyo, strongly defended the use of unpaid help.

“They don’t have to apply if they don’t want to,” the Australian said. “The economics of it necessitates having to have volunteers. They get trained, they get their uniforms. They are part of something very exciting. … I don’t think there’s a case for paying volunteers.”

Almost everyone else working the Olympics gets paid. Many, handsomely.

Tokyo is spending at least $20 billion to organize the Olympics, and organizers have raised $3 billion in local sponsorships — twice as much as any previous Olympics. IOC members like Coates receive per diems of between $450 to $900 when they are on Olympic business, and other generous perks like flights and top hotels.

IOC President Thomas Bach gets no salary but receives an allowance of about $250,000 per year as a “volunteer” president. The IOC typically operates with a $1 billion cash reserve, and had total revenue in the 2013-2016 Olympic cycle of $5.7 billion. It says it returns 90 percent of its revenue to sports federations and national Olympic committees.

American network NBC is paying $7.75 billion for the rights to six Olympics beginning in 2022, an extension on a $4.38 billion contract.

Tracey Dickson, who studies volunteerism at Canberra University in Australia, said many factors go beyond “the pure economics.” She listed social cohesion and volunteer camaraderie, which she termed “the fellowship of the suffering.”

“I can understand the economic argument,” she said. “But if they were being paid it would be real job with real expectations and there’d be a totally different vibe.”

“If they are just employees well, they’re just another employee. There’s so much value in that feel-good factor,” she said.

The 2016 Rio de Janeiro Olympics had problems finding volunteers. And when the games began, organizers said about 30 percent on any given day failed to show up for work, which organizers said was anticipated. Brazil also lacked a volunteer culture, and entrenched poverty meant that mostly the white and wealthy signed up.

Using volunteers also means those with free time are putting it toward the Olympics, rather than other charitable endeavors.

Mary Robinson, the former president of Ireland who has also served as UN High Commissioner for Human Rights, cautioned about using volunteers in mega-sports events if they undercut the market for people who need work.

Robinson is now serving with the Switzerland-based Centre for Sports and Human Rights, which was launched last year.

“Volunteers can play a role,” Robinson said. “But not if it displaces the potential for people having jobs where the entities can well afford to give people the opportunity to have gainful employment rather than work as volunteers.”

David Berri, a sports economist at Southern Utah University, suggested that organizers and Olympic officials should also work for free, or for smaller salaries.

“If the volunteers were paid, there would be less money for everyone else,” he said. “The Olympics have learned people will work for free, so they take advantage of this. If they (Olympic officials) really thought this was all OK, they should obviously volunteer to work for free.”