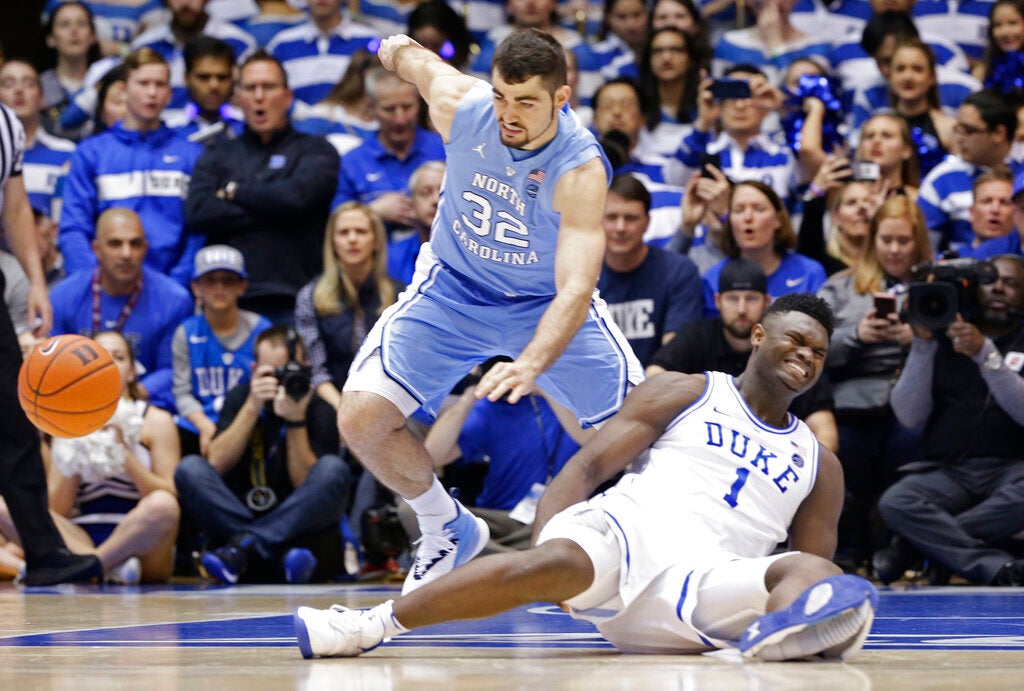 Duke’s Zion Williamson (1) falls to the floor with an injury while chasing the ball with North Carolina’s Luke Maye (32) during the first half of an NCAA college basketball game in Durham, N.C., Wednesday, Feb. 20, 2019. (AP Photo/Gerry Broome)

Duke rookie sensation Zion Williamson was forced out of the Blue Devils’ game against archrival University of North Carolina after he suffered a knee injury in the two teams’ matchup in the Atlantic Coast Conference.

Williamson was about to turn the corner against the Tar Heels’ Luke May when his left shoe exploded resulting in what Duke head coach Mike Krzyewski called a “mild knee sprain” in a report by ESPN.com.

The 6-foot-7, 285-pound forward then clutched his right knee in pain just 36 seconds into the game before walking off, in his own power, to the Blue Devils’ locker room without his Nike PG 2.5s.

UNC, the no.8-ranked team in the conference, then took advantage of Williamson’s absence and cruised to an 88-72 win over the top seeded Blue Devils.

It put everyone in the position of having to figure it out, playing without him, while playing a really good team. It’s not a good situation,” said Krzyweski in the ESPN.com report.

“At halftime the realization that he’s not there settled in. And we played horrible to start the second half. The final 16 minutes I thought we played really well, but it was too late,” Kryzewski added.

Nike, who is in a 12-year deal with Duke stemming from an extension in 2015, released a statement wishing Williamson, a projected top overall pick in the 2019 NBA Draft, a speedy recovery.

Williamson was wearing a school exclusive pair of PG 2.5s that are primarily designed for wing players and guards.

“We are obviously concerned and want to wish Zion a speedy recovery,” said the sports giant. “The quality and performance of our products are of utmost importance. While this is an isolated occurrence, we are working to identify the issue.”

WNBA legend Swin Cash,s a two-time WNBA champion and a two-time NCAA champion with University of Connecticut, chipped in in saying Williamson should wear LeBron James’ sneakers that are built for bigger players.

“Honestly at Zion’s size he needs to change up & wear Brons shoe. They are literally built for a guy his size. I remember after my back surgery I changed up shoes because of the shock impacted to my back,” said Cash who also wished the best for Williamson.