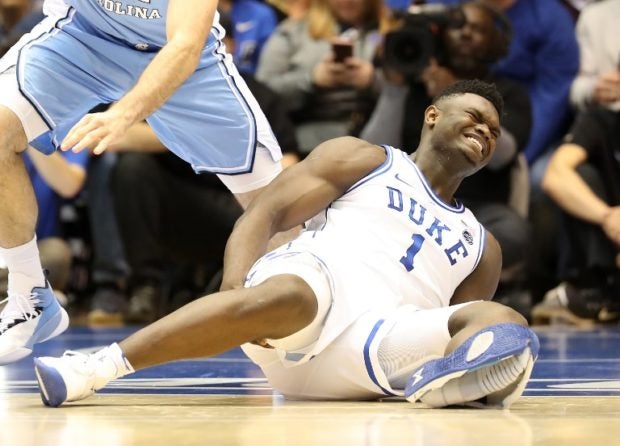 In this file photo taken on February 20, 2019, Zion Williamson #1 of the Duke Blue Devils reacts after falling as his shoe breaks against the North Carolina Tar Heels during their game at Cameron Indoor Stadium in Durham, North Carolina. AFP

NEW YORK, United States – Zion Williamson, the expected top pick in June’s NBA Draft, was declared out for Duke University’s game at Syracuse on Saturday, three days after his Nike shoe shredded during a game.

Duke’s athletic department announced on Twitter that the 18-year-old forward would miss the contest while still recovering from a right knee sprain suffered in the early seconds of a loss Wednesday to rival North Carolina.

Nike was in damage control mode after the high-profile star suffered the injury and left a game whose ticket resale prices rivaled those of Super Bowls and whose spectators included such celebrities as Barack Obama and Spike Lee.

Williamson, who stands 6-foot-7 (2.01m), has averaged 22.4 points a game. He was dribbling near the free throw line on his team’s first possession when he planted his left foot and his sneaker blew apart. /cbb