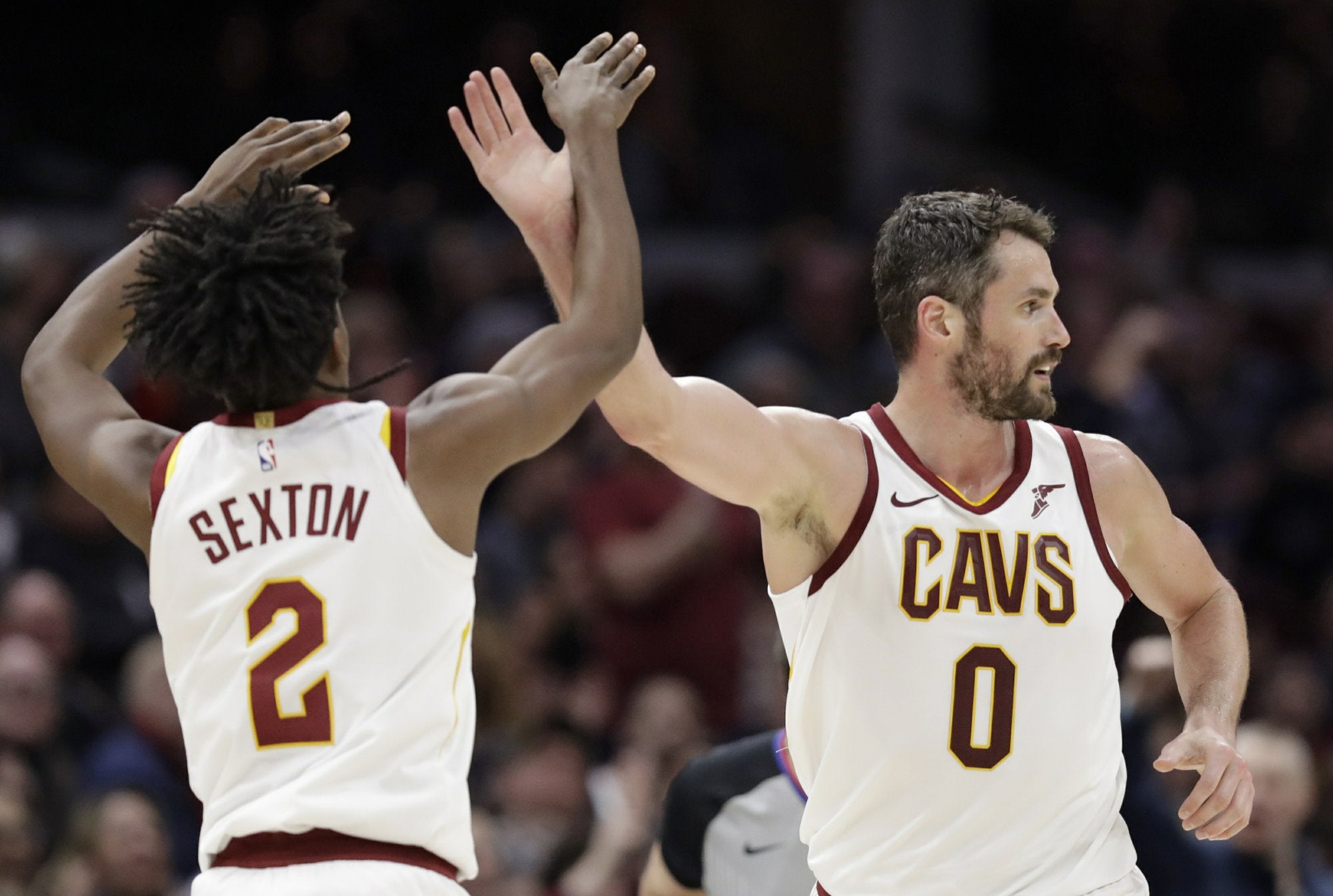 Cleveland Cavaliers’ Kevin Love (0) and Collin Sexton (2) celebrate in the second half of an NBA basketball game against the Memphis Grizzlies, Saturday, Feb. 23, 2019, in Cleveland. The Cavaliers won 112-107. (AP Photo/Tony Dejak)

Love, playing in back-to-back games for the first time since returning from foot surgery, had 10 points in the fourth quarter. He was 9 of 15 from the field overall, hit six 3s and made all eight of his free throw attempts.

The five-time All-Star had 12 rebounds in 26 minutes — his most since returning from the injury — but was on the bench for the final 5:23 because he’s still on a minutes restriction.

Sexton had 20 points and Ante Zizic scored 18 for Cleveland, which beat Phoenix on Thursday.

Jonas Valanciunas had 25 points 11 rebounds for Memphis, which has lost four straight and 16 of 20. Mike Conley scored 18 and Joakim Noah had 16.

The Grizzlies, who lost at home to the Los Angeles Clippers on Friday, were on the second part of a difficult back-to-back.

Love had surgery on his left foot in November after playing four games and returned Feb. 8. He hit three 3-pointers and a technical foul shot early in the third quarter to help the Cavaliers build a double-digit lead.

Memphis trailed 79-64 but outscored Cleveland 20-3 over the last seven minutes of the third.

The Cavaliers (14-46) won consecutive games for the third time this season. Cleveland has yet to win three in a row.

Memphis coach J.B. Bickerstaff was hit with a technical foul early in the third quarter. Noah, a constant target of boos by Cavaliers fans, received sarcastic cheers when he picked up a technical in the second.

Grizzlies: Valanciunas returned after not playing Friday because of personal reasons. He has appeared in three games since being acquired from Toronto on Feb. 7 and made his first start Saturday . … F Chandler Parsons scored four points in 18 minutes. He returned Friday for the first time since the third game of the season.

Cavaliers: Osman finished with 11 points. … Cleveland dominated the first quarter, holding a 21-5 rebounding edge and making all nine of its free throw attempts. … Cleveland led 44-26 early in the second.

Cavaliers coach Larry Drew isn’t sure when forward Tristan Thompson, who missed his 15th straight game because of a sore left foot, will return.

“It’s still going slow,” Drew said. “We’re going to take it very slowly as far as bringing him back.”

Bickerstaff knows his team must adjust without rookie guard Jaren Jackson Jr., out indefinitely with a bruised right thigh.

“It’s tough, obviously,” Bickerstaff said. “We were beginning to feature him more in fourth quarters.”