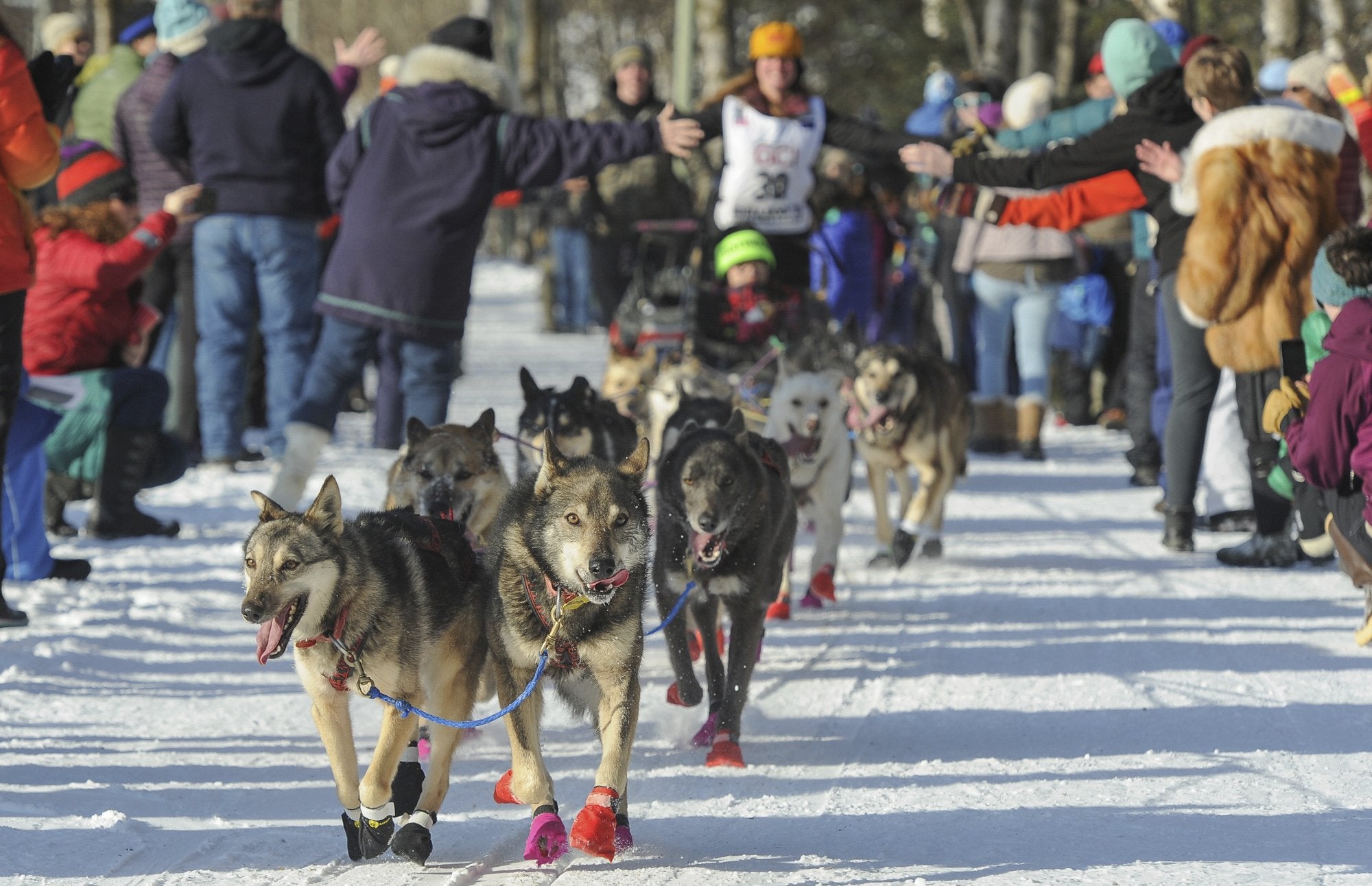 ANCHORAGE, Alaska — Big crowds converged on Alaska’s largest city Saturday as hundreds of dogs and their humans kicked off the 47th running of the Iditarod Trail Sled Dog race with a ceremonial sprint along snow-heaped streets.

The fan-friendly event in Anchorage brought spectators up close to the 52 musher-dog teams gearing up for the famed 1,000-mile (1,609-kilometer) race. Mushers are generally more relaxed here than they will be for the real thing. But the dogs barked furiously before setting off, jumping and straining against their sled lines in apparent excitement to get going on the 11-mile (18-km) dash.

Halana Hiatt of Denver was among the scores of fans who packed downtown to watch the action before she is set to return back home on Sunday. She is visiting the state with her Colorado-based mother, brother and grandmother after inviting them to experience the Iditarod, an item on her bucket list.

“It seemed like a big deal,” Hiatt said. “I wanted to come check it out.”

The serious, competitive portion of the wilderness trek starts Sunday in the small community of Willow, north of Anchorage. From there, the 14-dog teams will cross two mountain ranges, the frozen Yukon River and dangerous sea ice along the Bering Sea Coast. Village checkpoints are staged across the trail before the teams reach the finish line in the old Gold Rush town of Nome on the state’s western coast.

The race comes after two difficult years for organizers marked by a dog-doping scandal, the loss of big-name sponsors and escalating pressure from animal activists over multiple dog deaths.

But on Saturday, participants were focusing on the race ahead.

“I’ve been working for this, building for this, for a long, long time,” Iditarod rookie Richie Beattie, from Two Rivers in Alaska’s interior, said as he waited with his dogs for Saturday’s event to get started. He might be a rookie in the Iditarod, but he’s a veteran musher, having competed twice in the 1,000-mile (1,609-km) Yukon Quest International Sled Dog Race. So he was looking forward to getting on the trail “for real.”

Other participants include defending champion Joar Ulsom of Norway, three four-time winners and a three-time champion.

Four-time Iditarod winner Lance Mackey was greeted by multiple fans in his first Iditarod since he scratched in the 2016 race. Mackey, who also won the Yukon Quest four times, is a throat cancer survivor who has an outsize personality popular with fans. He continues to have multiple health problems, including hands that are unusually susceptible to cold and having to drink water constantly because radiation from treatments killed his salivary glands.

He said he was ecstatic to be back in the race.

“I have no expectations,” he said. “My goal this year is to start with a smile, finish with the same smile and 14 happy, healthy dogs.”

People for the Ethical Treatment of Animals, a longtime race critic, protested at Saturday’s event with harnesses dangling from a representation of the burled arch that marks the finish line in Nome. The harnesses symbolized dogs that have died over the Iditarod’s history. By PETA’s count, more than 150 dogs have died in the race, including one last year. Five dogs connected with the 2017 race also died.

“Dogs will continue to drop dead as long as they’re forced to run 1,000 miles at breakneck speed just so their owners can win prize money,” PETA spokeswoman Tricia Lebkuecher said.

Race officials dispute the total number of deaths, saying no records of dog deaths were kept in the Iditarod’s early years. They have not provided their count of dog deaths to The Associated Press despite numerous requests over the past few years, the latest on Friday.