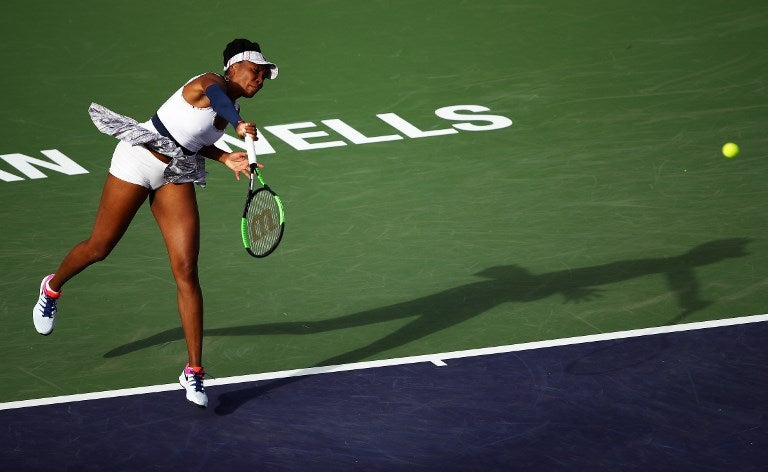 INDIAN WELLS, CALIFORNIA – MARCH 09: Venus Williams of the United States serves against Petra Kvitova of the Czech Republic during their women’s singles second round match on day six of the BNP Paribas Open at the Indian Wells Tennis Garden on March 09, 2019 in Indian Wells, California. Clive Brunskill/Getty Images/AFP

Seven-time Grand Slam champion Venus Williams rallied from a set and two breaks down to topple third-seeded Petra Kvitova 4-6, 7-5, 6-4 on Saturday and reach the third round at Indian Wells.

“Today I just fought and tried my hardest, waited for opportunities and sometimes created them,” said Williams, currently ranked 36th in the world.

Two-time Wimbledon champion Kvitova, who was runner-up to Naomi Osaka at the Australian Open in January, also reached the final in Dubai last month.

The Czech appeared to have taken control of the stadium court slugfest when she broke Williams for a 4-3 lead in the third.

But Williams immediately broke back and Kvitova soon found herself serving to save the match. She took a 40-15 lead in the final game, but two double faults, followed by a lucky netcord bounce for Williams gave the American a match point and Kvitova sailed a ball long to end matters after two hours and 27 minutes.