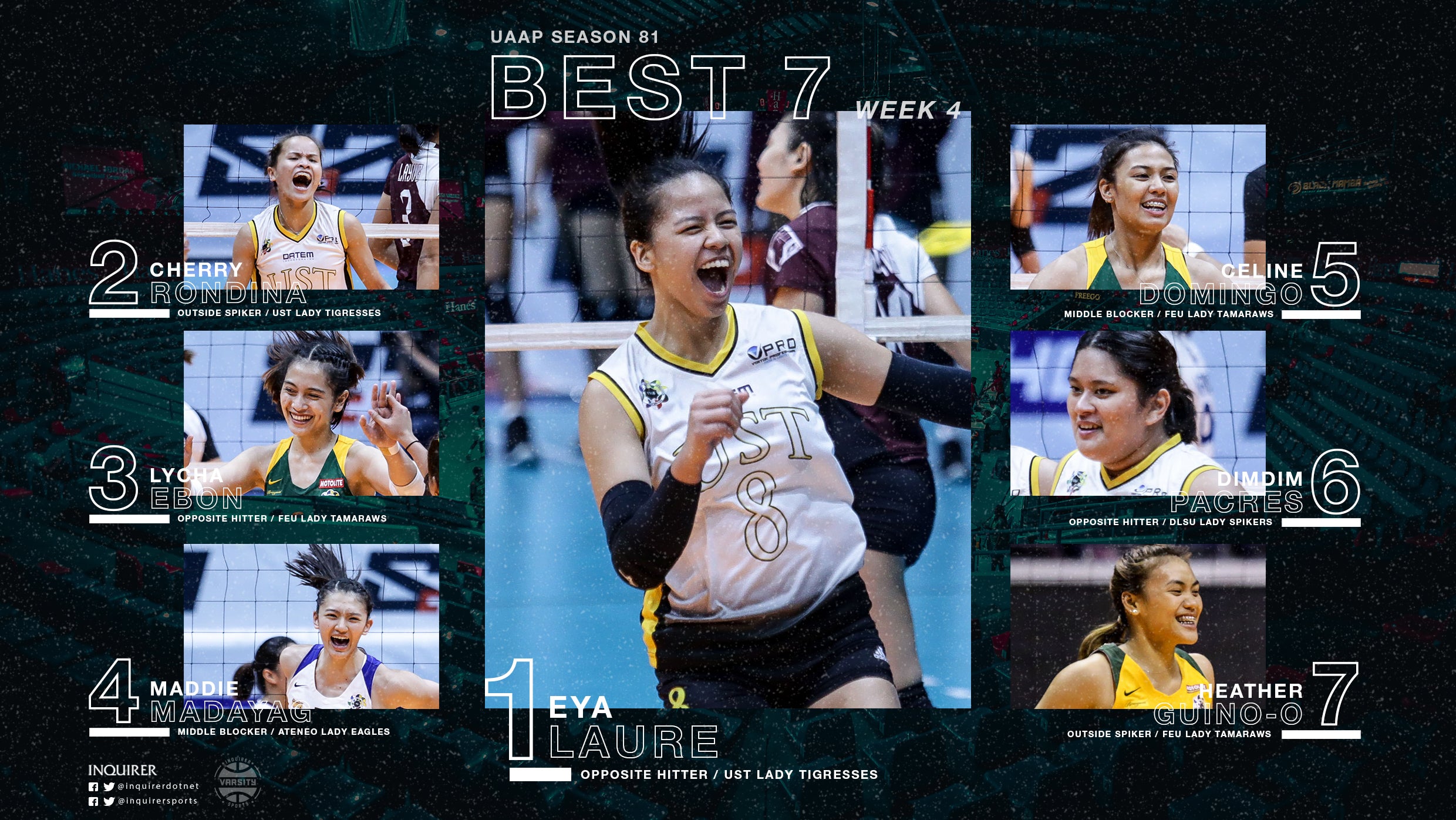 MANILA, Philippines—This year may be the Year of the Pig but Week 4 of the UAAP Season 81 women’s volleyball tournament is the week of the Golden Tigresses.

University of Santo Tomas racked up two straight wins this past week to create a pileup in the second seed of the standings with a 4-2 record to tie La Salle and Far Eastern University.

Ateneo is at the helm with a 4-1 card while University of the Philippines dropped all the way to fifth with a 3-2 record.

National University and Adamson University are tied in sixth with 1-4 records while University of the East is at the bottom at 1-5.

With that out of the way, here are the top seven players that made this week as maddening as it can be. The Rookie of the Year race has been blown wide open and Eya Laure has left destruction at her wake.

UST’s super freshman was nothing short of spectacular in Week 4, leading the Golden Tigresses to two straight wins with victories over defending champion De La Salle and National University.

The Golden Tigresses’ win over NU meant more to Laure since it was the Lady Bulldogs’ high school team that tormented the UST star and foiled her attempts to get another UAAP title in the girls’ high school division.

Laure released some of her frustration and punished the Lady Bulldogs with 20 points.

More importantly, Laure’s combined 35 points in the week made her the second-leading scorer in the league with a total of 102 points. “The Cherry Bomb” is explosive as ever and no shelter is strong enough to protect the league from Cherry Rondina.

UST’s superstar is still the offensive mayhem that she is and after leading the Golden Tigresses to two wins this week she’s racked up a total of 105 points to take the top spot of the league’s Best Scorers table.

If Rondina let Laure had her fun against the Bulldogs, she made sure that she was front and center when the Golden Tigresses humbled the Lady Spikers.

Rondina wasn’t fazed with the defending champions pedigree and she proceeded to put up 19 points in the Golden Tigresses sweep of La Salle. Laure may have been this season’s favorite for the top rookie honors but Far Eastern University’s Lycha Ebon has also been impressive in her own way.

After her first five games in the collegiate level, Ebon has emerged to be the third-best scorer in the league with a total of 86 points. She’s also led the Lady Tamaraws to two wins this week.

Ebon shone in FEU’s five-set win over University of the East with 21 points and she remained impactful in the Lady Tamaraws’ second victory of the week with 17 points against Adamson. Ateneo has managed to shrug off its opening weekend loss to La Salle and has so far racked up four straight wins to capture the top spot of the standings when it pummeled University of the Philippines in its lone game this week.

It was a game that had so much hype since the winner gets the No. 1 seed after Week 4 while the loser ends up in fifth.

And the Lady Eagles made sure they would leave the week as the league’s queens after a resounding sweep of the Lady Maroons.

Leading Ateneo’s romp of UP was Maddie Madayag.

Mainly a defensive force, Madayag was Ateneo’s top scorer against UP with 14 points, highlighted by six blocks. Celine Domingo is living up to her position.

Middle blockers are there to provide stability for their teams and Domingo has definitely brought that to FEU.

As for the bigger picture, Domingo is fifth in the Best Scorers table with 83 total points. Dimdim Pacres is never considered as one of the top stars in the UAAP but she’s always there when UST needs that valuable third option on offense.

When Season 80 Rookie of the Year Milena Alessandrini went down with an injured left knee, Pacres took it upon herself to become UST’s third asset.

Pacres has been a reliable third fiddle to UST’s star duo of Cherry Rondina and Eya Laure.

In UST’s pair of wins this week, Pacres scored a total of 20 points and it wasn’t just her offense that made her of value for the Golden Tigresses.

Pacres was UST’s best digger this week tallying a total of 28 excellent digs. FEU has had a stable week and there was one Lady Tamaraw who was polarizing in every sense of the word.

The Lady Tamaraws went 2-0 this week with Heather Guino-o going from dormant to blazing.

Her 20-point explosion pushed Guino-o from the 14th spot in the Best Scorers table to eighth, overtaking the likes of  Eli Soyud, Mary Ann Mendrez, and Isa Molde.