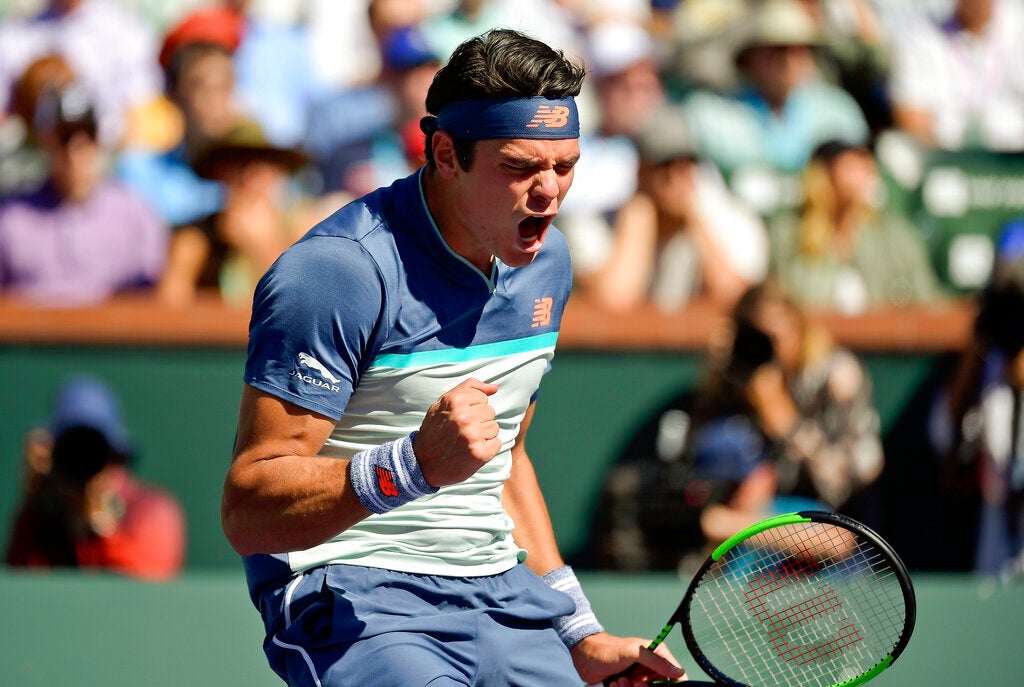 Raonic fired 13 aces against no double faults in putting away Kecmanovic in 72 minutes on a sunny, windy and cool day in the Southern California desert.

“Even when I was hitting the spots, I wasn’t hitting them that well,” Raonic said about his serving. “I think that can get better.”

He’ll try to improve next against No. 7 Dominic Thiem, who advanced via walkover when No. 18 Gael Monfils announced on court that he couldn’t play because of a left Achilles injury.

At 15-3 this year, Monfils was off to the best start of his career. But he was 0-4 against Thiem.

Kecmanovic was the first lucky loser to reach the quarterfinals at the tournament since it became a Masters 1000 event in 1990. Ranked 130th in the world, the Serb lost in qualifying, but his fortune soon turned.

Three seeded players withdrew before the tournament began, clearing the way for Kecmanovic to become a lucky loser and receive a first-round bye.

The teenager certainly made the most of it. Kecmanovic got by three players, including 30th-seeded Laslo Djere, in straight sets to set up his second meeting with Raonic.

Raonic won 88 percent of his first-serve points and saved all three break chances against him.

“I knew he had nothing to lose, and I had to be really disciplined with myself,” Raonic said.

In January, Raonic beat Kecmanovic in straight sets on his way to the title at Brisbane in January.

Belinda Bencic beat fifth-seeded Karolina Pliskova 6-3, 4-6, 6-3 to reach the semis, ensuring her return to the top 20 in the rankings.

Bencic’s victory set up a semifinal against No. 8 seed Angelique Kerber, who beat error-prone Venus Williams 7-6 (3), 6-3 in a matchup of 30-somethings.

Williams led 4-2 in the first set before Kerber won three straight games to go up 5-4. Kerber held to force the tiebreaker, which she dominated.

It took Kerber several games in the opening set to get used to Williams’ changing tactics.

“She changed the rhythm a little bit,” Kerber said. “Going for it when she put the lob ones and the high ones and the short ones. In the first set I was moving everywhere and when I have the chances to move her.”

Williams fought off two break points to tie the second set 2-all before Kerber again won three games in a row for a 5-2 lead. She broke Williams in the match’s longest game that went to deuce five times when Williams’ forehand went wide.

Williams alternately smacked winners from the baseline and sprayed shots beyond the lines. She had her right knee taped and didn’t appear to be moving with ease or serving with much pace.

“I played the best I could here,” she said.

But Williams hasn’t made it farther than the quarterfinals at any Premier Mandatory or Grand Slam tourney since last year’s BNP Paribas Open. Until Kerber stopped her, Williams had won four matches in a row for the first time since last year in the desert.

Bencic was pushed to three sets for the first time in four matches at the tournament. She was coming off a straight-set upset of defending champion and top-ranked Naomi Osaka in the fourth round.

Pliskova raced to 4-1 lead before wrapping up the second set. In the third, she overcame a break point to hold at 2-all but only won one more game the rest of the way.

“Physically, it was tough somehow, and the wind didn’t help much,” Pliskova said. “So my serve was bad, my shots were bad.”

Bencic improved to 18-3 this year. She won her third career title at Dubai last month and her first since 2015. The 22-year-old Swiss player missed five months in 2017 after wrist surgery.

“When you’re confident, you can really just trust your instincts and you don’t have to think about it at all,” Bencic said. “I’m definitely playing how I feel it, and it’s going well so I’m not planning on changing that.”