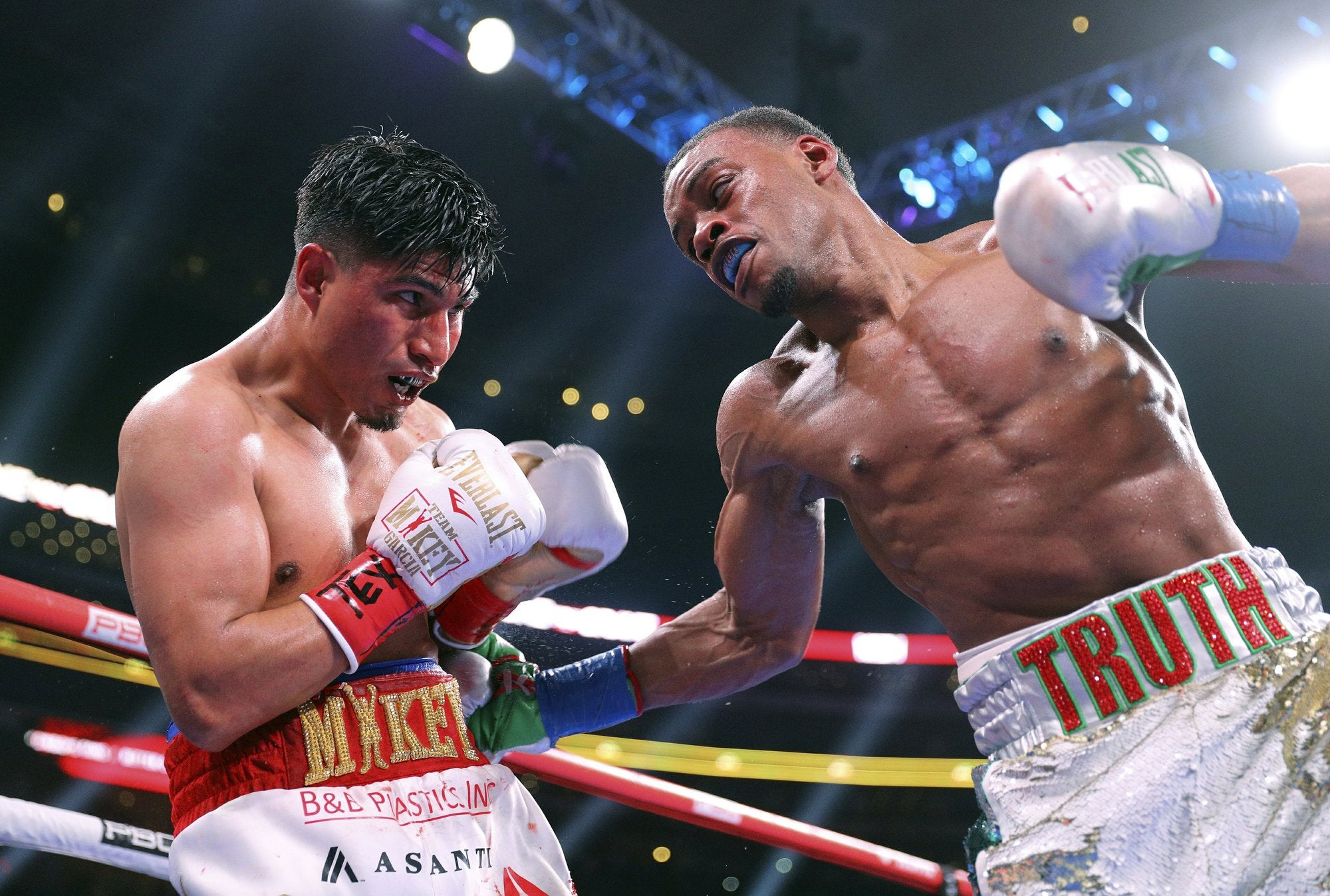 Mikey Garcia, left, takes a blow to the body from Errol Spence Jr. during the ninth round of the IBF welterweight championship boxing bout Saturday, March 16, 2019, in Arlington, Texas. (AP Photo/Richard W. Rodriguez)

ARLINGTON, Texas — Errol Spence Jr. had to go the distance to defend his IBF welterweight title for the third time. Still, the outcome was never in doubt for one of the world’s best pound-for-pound boxers.

“Throughout training camp, a lot of commentators thought he was too smart and I couldn’t box as well as him. I showed I can box and I can move my head if I want to,” Spence said. “The game is to be smart. It’s the sweet science. I had the size and reach advantage, so why not use it to take away the jab? It’s a weapon for me and it takes away one of his weapons.”

Garcia took a pounding but never went down. Obviously worn out, he spent the later rounds blocking punches instead of throwing them and was never able to find the opening for a fight-changing response.

“My brother (trainer Robert Garcia) wanted to maybe stop the fight in the later rounds. He didn’t want to let me get hit more, but I told him I was fine and I tried to go out there and pull it off,” Garcia said. “I thought I could have landed one good shot to change everything, but I wasn’t able to land it.”

It was the first time Spence had to go the distance in his last 12 fights.

Garcia, who moved up from 135 to 147 pounds in his attempt to become a five-division champion, lost for the first time in 40 pro fights.

The hard-punching Spence landed 345 of the 1,082 punches (32 percent) he threw — both of those career highs. That included 237 of 464 (51 percent) of his power punches in his second title defense at home in North Texas in nine months.

During one portion of the ninth round, Spence walked Garcia in a full circle around the ring while continually delivering blows.

“The motivation fighting in front of my hometown crowd made me feel great,” Spence said. “These people have supported me since day one and I wanted to put on a good performance for all of them.”

Garcia was fighting for the first time since unifying the IBF and WBC lightweight titles with a unanimous decision last July over Robert Easter in Los Angeles.

“I was able to hold my own,” Garcia said. “We just went 12 rounds with a great welterweight champion. That’s a feat no one has done recently. I’m proud of what I was able to do. I have to go back and think about it. I will probably go back to lighter divisions but we’ll have to think about it.”

Both fighters entered the arena to loud cheers and different kinds of music, with Spence following a local high school marching band. Garcia got plenty of support from the large number of Mexican fans at the fight.

Chants of “Mikey! Mikey!” broke out in the second and third rounds, but those faded away as Spence kept punching and the crowd instead responded to hard shots — many more for the champion than the challenger.

The fight was at midfield of AT&T Stadium, the massive billion-dollar home stadium of the favorite NFL team for both fighters. Cowboys owner Jerry Jones was there along with several players, including quarterback Dak Prescott, as part of an announced crowd of 47,525.

Jones and Prescott even stepped into the ring with Floyd Mayweather before the main event.

Exactly nine months earlier, Jones and the Cowboys were also there when Spence won his second title defense in the 147-pound division. Spence stopped previously undefeated challenger Carlos Ocampo with a first-round knockout at the NFL team’s practice facility in Frisco, not far from his home in Desoto.

Garcia grew up around Oxnard, California, where the Cowboys hold part of their preseason training camp each year.

WBA welterweight champion Manny Pacquiao was in the building and could be a future opponent for Spence. Pacquiao won two title bouts at the Cowboys’ stadium in 2010, when he beat Joshua Clottey for the WBO welterweight crown and later Antonio Margarito for vacant WBO super welterweight title.

“He’s broken records here before, he’s a legend in the sport and it’d be my honor to fight him next,” Spence said of the 40-year-old Pacquiao, who wants to return to the ring in July.