It’s hard, heavy, brittle and melts away without trace. 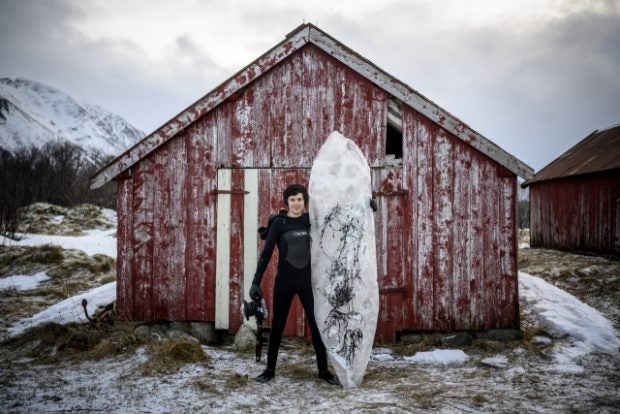 Norway’s Inge Tamburaci Wegge, 32, head of the Iceboard project, poses with a surfboard made of ice, on the Delp surf spot, near Straumnes, in the Lofoten Islands, over the Arctic Circle, on February 18, 2019. Image: Olivier MORIN / AFP

But ice is the material of choice for Inge Wegge, who sculps chunks of it and uses it for a most unlikely purpose — to make surfboards.

The Norwegian adventurer rides the ice boards on the waves off Norway’s Lofoten archipelago north of the Arctic circle.

The blocks weigh 60-80 kilograms (132-176 pounds) against two or three kilograms for the classic board. They are hard to carry, difficult to float and tough to balance on with cold feet. And they melt away within minutes in seawater warmed by the Gulf Stream.

Extreme surfer and filmmaker Wegge, 33, has spent nine months trying to carve the perfect ice board.

“When I talked about it to people, they thought it was a joke. It was too crazy. I had to make it come true,” he said.

Just before the blocks melt, the ice boards lose their bulk and weight and achieve perfect symmetry.

For a brief span, the ice block becomes the ideal surfing machine.

“The first 20 minutes, they are surfable,” he said. “Then just perfect for two or three minutes — you need the right waves just then — and then (after that they are) too fragile.”

Wegge started out by cutting ice blocks from a frozen lake with a circular saw but found they were too full of air and too soft to last more than 10 minutes.

So he and his team of fellow surf enthusiasts built a mold and installed it in a fishery refrigeration plant at minus 20 degrees Celsius (minus four degrees Fahrenheit) in the fishing port of Svolvaer.

The steel-hard ice blocks that come out are shaped with a sculptor’s tool and strewn with seaweed so surfers can hold their footing.

Staying upright on slippery boards with cold feet was half the battle as Wegge and his pals tested their latest ice boards in February, balling their eyes shut again the snow, driven vertically across the wave by the winter gales.

In South Africa, disabled surfers thrill at catching a wave