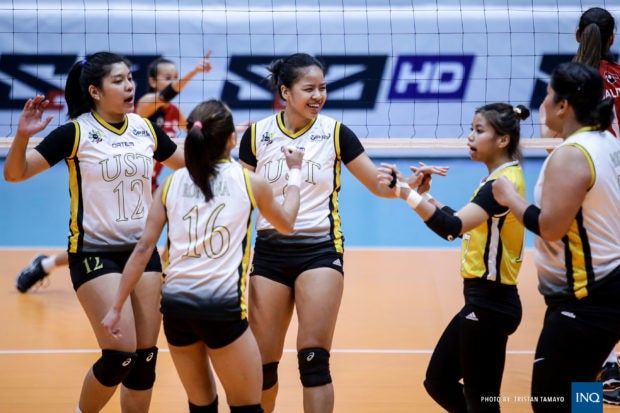 Eya Laure doesn’t want to think much about becoming the future leader of University of Santo Tomas.

But the way she’s playing belies that.

Playing with a lot of heart, the rookie open hitter scored 15 points to power UST to a 25-18, 25-14, 25-20 rout of University of the East Sunday in the UAAP women’s volleyball at FilOil Flying V Centre.

It was the third straight win for the Tigresses in a 5-2 card, good for a tie for second with the La Salle Lady Spikers at the end of their first round schedule.

“For me it’s about teamwork, playing with heart and communication,” said Laure in Filipino. She teamed up with UST resident gunner Sisi Rondina in burying the Lady Warriors to their fourth straight defeat for 1-6.

Ayel Estranero, UP’s soft-spoken setter, said their fourth win in seven games was a “morale-booster” after the Lady Maroons suffered stinging defeats at the hands of UST and rookie-laden National University.

Adamson fell into a tie with UE in bringing up the rear of the eight-team field going into the second round next week.

Rondina finished with 17 points, while Dimdim Pacres and KC Galdones contributed eight points each for UST, which has been playing without the injured Milena Alessandrini.

“All of this is for Milena, she gives us motivation that every one must step up every game and do what we do in practice,” added Laure.

Judith Abil scored 15 points for the Lady Warriors, including seven in the third set when she single-handedly tried to carry the fight for UE.

UST coach Kungfu Reyes lauded his players’ efforts which he said was best in recent years.

“Our development was very good, I hope we sustain it,” said Reyes. “Our only minus factor is we lost one player to injury (Alessandrini).”

He said he won’t gamble using Alessandrini until the 6-foot-2 hitter is 100 percent ready physically and psychologically.