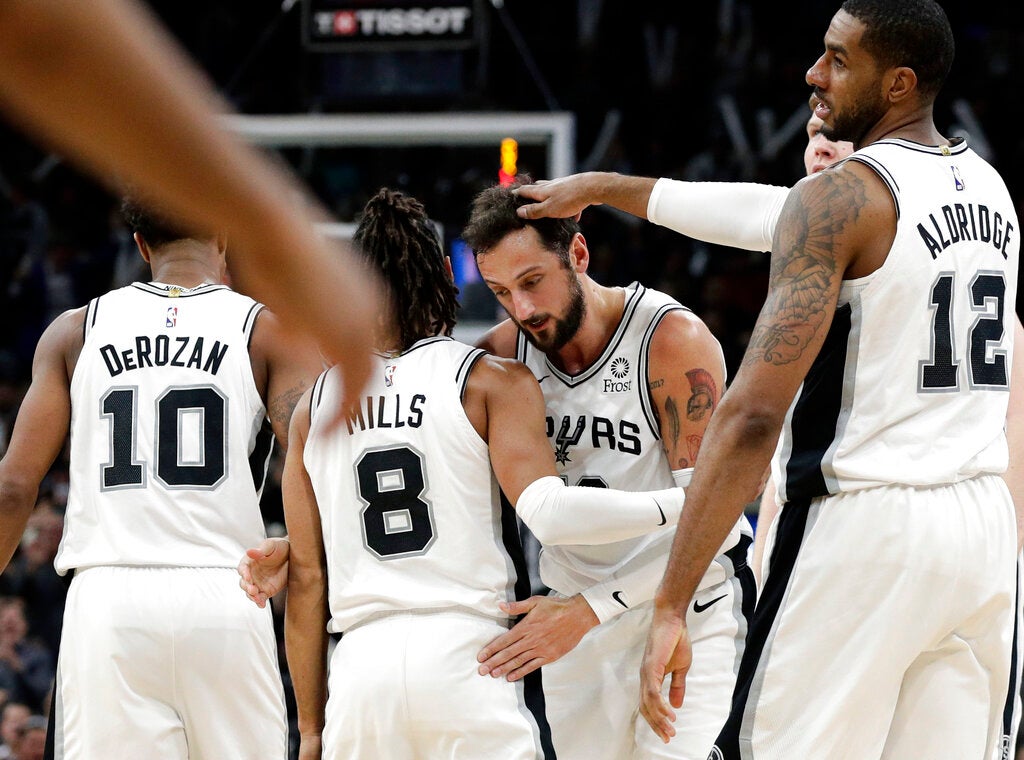 SAN ANTONIO — The San Antonio Spurs aren’t concerned with making statements. They just want to pile up as many victories as they can late in the season.

“We’re just trying to get wins, man, that’s all,” Spurs forward Rudy Gay said. “We’ve had wins, we’ve had big wins, we’ve had some bad losses, (too). It just feels good to win the games we think we should.”

San Antonio won its 11th straight at home and moved into fifth in the Western Conference following the Thunder’s loss to Miami. The Spurs also clinched a winning record for the 22nd straight season.

Stephen Curry had 25 points after a slow start and Kevin Durant added 24 for the Warriors, who entered the game having won two straight. Golden State dropped into a tie with Denver for first place in the West with matching 47-22 records.

“That’s the hottest team in the league and obviously really well-coached,” Warriors coach Steve Kerr said. “They were executing and I thought they outexecuted us, outcoached us. They deserved to win.”

San Antonio’s winning streak is second only to Golden State’s 11 straight wins earlier this season. Remarkably, the Spurs’ longest winning streak since 2016 comes directly after they went 1-7 for their worst Rodeo Road Trip ever.

San Antonio has beaten Golden State, Denver, Milwaukee, Oklahoma City, Portland and Detroit during its streak. All of those clubs are among the top six teams in their conference.

“Guys are playing better,” Aldridge said of the turnaround. “We’re trying to be better defensively. Communication has been better and it’s just winning time. I think everyone senses that.”

Golden State was without DeMarcus Cousins and Andre Iguodala, who both sat with injuries, but remained within two possessions in the final minute.

The Warriors had to rally in the second half after a sluggish start.

Curry and Klay Thompson opened the game a combined 0 for 11, but the Warriors’ defense allowed them to tie the game at 25 when Curry threw in a 61-footer to close the first quarter.

Curry finished 9 for 25 from the field and Thompson finished with 14 points on 5-for-18 shooting. Thompson said the “Splash Brothers” struggles were their own rather than anything the Spurs did defensively.

“Just missed shots,” Thompson said. “That’s all it is. Shots that we normally hit, too. Yeah, they’re a smart disciplined team but it’s not like we weren’t getting to our spots and getting good looks. Just didn’t go in.”

After trailing by 11 in the third quarter, the Warriors’ offense awoke to silence the sold-out crowd with a 16-5 run to forge a 75-all tie. The run included a shakedown, step-back 3-pointer by Curry and a pair of quick passes from Curry to Draymond Green to Shaun Livingston for an emphatic dunk. Curry had eight points in the run.

“Every time we made a run, they countered and they made a run,” Green said.

DeRozan scored 10 points in the final quarter, including a pair of pull-up jumpers over Thompson, to seal the victory.

Gay added 17 points for San Antonio and Derrick White had 12.

Warriors: Cousins sat the game out with a sore right foot and Iguodala missed the game following dental work. … Andrew Bogut started the game after signing with the team March 6 after playing this season in Australia. Bogut spent four seasons with Golden State before rejoining the team as a free agent. … The Warriors have won at least 23 road games in six straight seasons. They lost for the fifth time in 24 games away from home. … Golden State defeated San Antonio by 39 points in their previous meeting, Feb. 6 at Oracle Arena. It was the largest winning margin over the Spurs in franchise history.

Bogut picked up a foul on an illegal screen 9 seconds into the game.

“That was a welcome to the league, for sure,” Bogut said. “Just like, we know you set some hard screens so we’re just going to blow one early.”

Bogut finished with seven points and seven rebounds in 19 minutes as he reunited with Curry, Thompson and Green. His points included an alley-oop dunk from Curry.

“It was fun,” Curry said. “It’s been what three years (since he last played with Bogut). I came in transition and besides probably (Damian Jones) early in the year, I haven’t thrown a lob like that to somebody. It just felt like second nature at that point. He went up and finished it.”

Warriors: At Minnesota on Tuesday night.