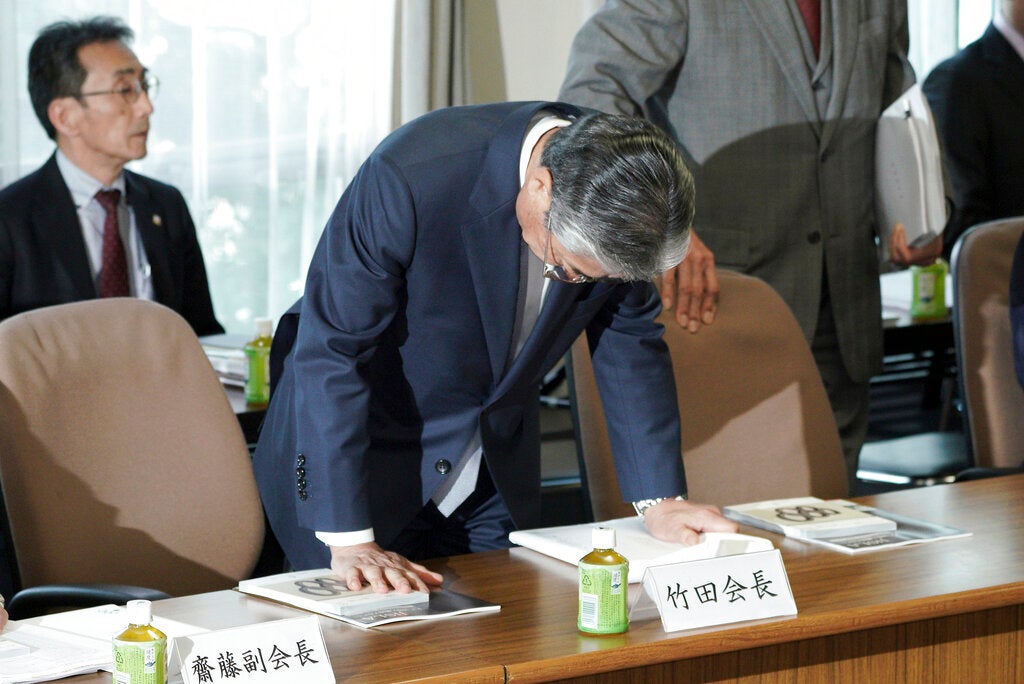 International Olympics Committee member and head of the Japanese Olympic Committee Tsunekazu Takeda bows as he arrives at the venue of a JOC executive board meeting in Tokyo Tuesday, March 19, 2019. Takeda is resigning amid a bribery scandal that investigators suspect helped Tokyo land next year’s Olympics. Takeda announced Tuesday he will stand down when his term ends in June, but he denied corruption allegations against him. (AP Photo/Eugene Hoshiko)

TOKYO— Tsunekazu Takeda, the president of the Japanese Olympic Committee, is resigning amid a bribery scandal that investigators suspect helped Tokyo land next year’s Olympics.

Takeda announced Tuesday he will stand down when his term ends in June, but he denied corruption allegations against him.

Takeda is also a powerful International Olympic Committee member and the head of its marketing commission. He holds the IOC spot by virtue of the Japanese presidency.

He said it was his own decision, and in the interests of the future of the Japanese Olympic Committee.

“I would like to leave the future of the JOC to a younger generation to lead up to Tokyo 2020,” he said. “At the end of my tenure in June, I am pulling out as JOC chairman and as a committee member.”

His departure as head of the JOC will also end his terms at the International Olympic Committee and with the local organizing committee for the Tokyo Games.

The scandal has cast a shadow over next year’s Olympics and underlines flawed efforts by the IOC to clean up its bidding process. Japan is spending at least $20 billion to organize the games, which open July 24, 2020.

The organization of the last Summer Olympics in Rio de Janeiro was chaotic from start to finish and ended eventually with the arrest of organizing committee president — and Brazilian Olympic Committee president — Carlos Nuzman in a similar vote-buying scandal.

The favorite to replace Takeda is Yasuhiro Yamashita, a judo gold medalist in the 1984 Olympics.

Takeda has acknowledged he signed off on about $2 million in payments to a Singapore consulting company, Black Tidings, and its head Ian Tan Tong Han.

French investigators have linked Black Tidings to Papa Massata Diack, one of the sons of powerful ex-IOC member Lamine Diack of Senegal.

Lamine Diack had huge influence over Olympic voters in Africa. In 2013, IOC members voted for Tokyo, eliminating bids from Madrid and Istanbul.

Takeda has said he was not involved in the decision-making process and had no reason to question what he termed a “regular commercial contact” approved by others at the JOC.

The scandal has also shined a light on the role on Dentsu, the giant Japanese advertising and marketing agency. Since getting the Olympics, Dentsu has helped Tokyo organizers line up a record $3 billion in local sponsorship.

Dentsu has acknowledged it advised the Japanese bid committee about bid consultants just before the IOC vote in 2013. Tan was among them.

In a 50-page report by the Japanese Olympic Committee investigating the bid, it said the committee — citing an evaluation from Dentsu — decided “that Tan was an extremely competent Asian consultant.”

It is not clear if Dentsu is a target of French investigators.

IOC President Thomas Bach, speaking in December in Tokyo and standing alongside Takeda, described the games as “the best prepared” in history. They have overcome early problems that included a plagiarized logo design, and a redesign of a new national stadium because of soaring costs.

General cost overruns have continued to be an issue for Tokyo, which is now spending three times more than it said it would when it was selected. All venues are expected to be ready ahead on time. The new national stadium is to be completed by the end of the year.

Takeda, 71, is a distant member of Japan’s royal family, the great grandson of the Meiji emperor who ruled late in 19th century and into the 20th. He competed in equestrian events in the 1972 and 1976 Olympics.