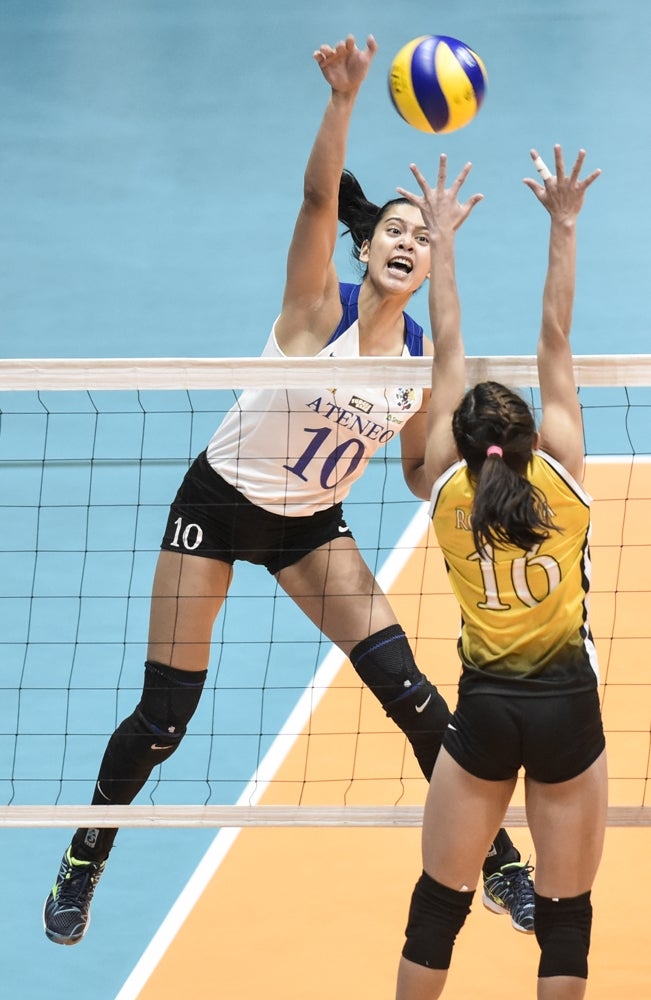 Brandishing the fighting heart that mattered when the chips were down, Ateneo negated the massive firepower that University of Santo Tomas packed behind star hitter Sisi Rondina.

Facing match-point and the prospects of seeing their six-game winning streak snapped via a straight sets loss, the Lady Eagles came charging back to score a come-from-behind 19-25, 22-25, 27-25, 25-22, 15-11 victory on Wednesday night at FilOil Flying V Centre.

Their seventh win in eight matches kept the Lady Eagles firmly entrenched at the top while sending a message across the field that no one player can beat them.

The win also allowed Ateneo to keep its mastery of UST, extending its streak in their head-to-head rivalry to 15 games dating back to Season 74.

Rondina equaled a league record held by one of the league’s most illustrious stars, dropping 35 points on the Ateneo defense.

But the Lady Eagles were simply up to the challenge and refused to just fold up and die.

But the offense was not enough for UST to extend a three-game winning streak as the Tigresses absorbed their third loss in eight games.

Poised to take the win in just three sets, the Lady Warriors found the going rough in the third frame as the Lady Bulldogs raced to a 24-18 lead and forged a fourth set.

It was a revenge of sorts for the Lady Warriors, who bowed to the young Lady Bulldogs in the first round.

Maddie Madayag scored 23 points, 11 of them on kill-blocks, to frustrate UST’s vaunted gunners, including the heavy hitter Dimdim Pacres, the designated third option who was limited to six points.

When Madayag heard of her stats, she was surprised: “Serious? Oh my gosh. I just played my game and did whatever I can to contribute to the team.”

The Tigresses were never the same after failing to wrap it up in the third set, although Rondina continued her scoring binge.

The two teams exchanged leads several times until Ateneo took advantage of Eya Laure’s service error at the 10-10 score line and took it up a notch for the 13-10 advantage after Kat Tolentino’s ace.

Rondina matched the league record of Alyssa Valdez for Ateneo in 2013.

Read Next
Muntinlupa nears semis
EDITORS' PICK
Bong Go demands ‘fair reporting’ from ABS-CBN but will appeal to Duterte to save jobs
Mallorca City: Home of Cavite’s finest industrial hub
Wilder says costume wore him down before Fury did
Franchise of media giant to go on Guevarra tells senators
ABS-CBN apologizes to Duterte for 2016 election ad mess
Here’s How Protein and Calcium Deficiency Can Affect Your Kid’s Health
MOST READ
Dominguez: ABS-CBN account on unaired ads ‘does not tally’ with Duterte campaign experience
Jordan: ‘When Kobe Bryant died, a piece of me died’
Duterte: Set aside petty political differences to ensure Edsa legacy lives on
Lacson: For House to sit on pending bills ‘reeks of abdication’
Don't miss out on the latest news and information.