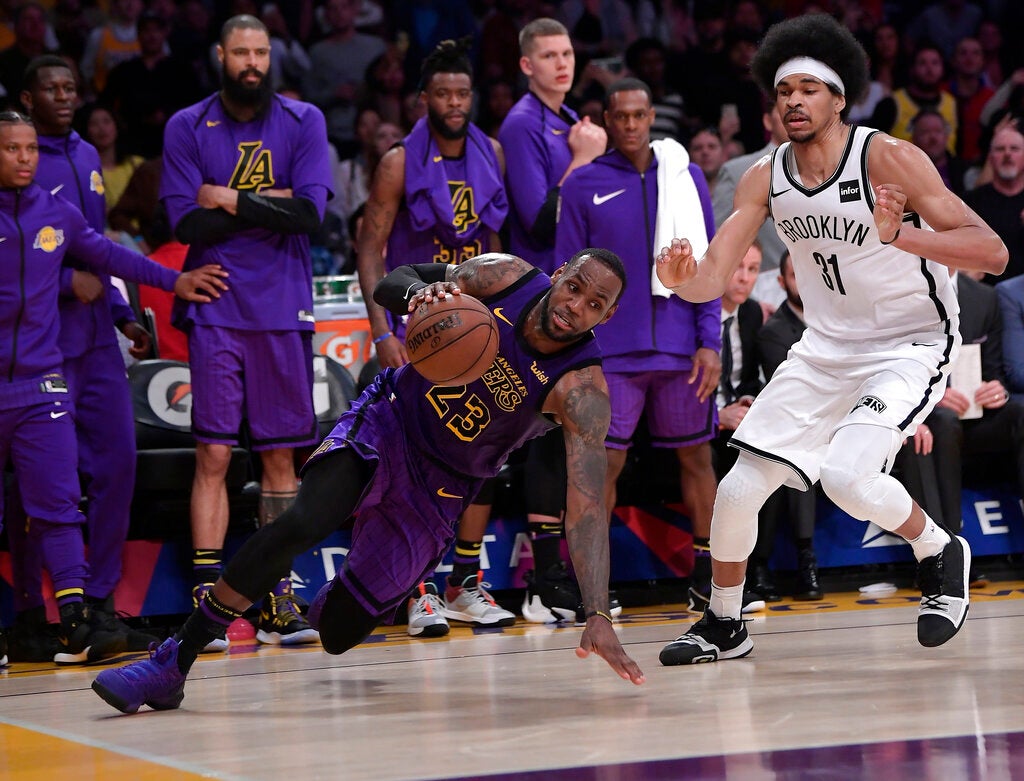 Spencer Dinwiddie added 19 points in his hometown as the Nets (38-36) bolstered their playoff chances with their second straight win after an 0-3 start to this seven-game road trip.

Brooklyn is seventh in the Eastern Conference standings, a half-game behind sixth-place Detroit and 2 ½ games ahead of ninth-place Orlando.

JaVale McGee had career highs of 33 points and 20 rebounds along with six blocked shots for the Lakers, who have lost five straight and 10 of 11.

Los Angeles (31-41) will miss the playoffs for a franchise-record sixth straight season despite the arrival of LeBron James, who fell just short of his 81st career triple-double with 25 points, 14 assists and nine rebounds.

The teams traded the lead down the stretch of a game featuring 23 lead changes, but Harris put Brooklyn ahead to stay on a layup with 5:28 left. The Lakers got within three points in the final minute, but James committed a turnover and missed a 3-pointer in the closing seconds.

James sat out of the Lakers’ road finale at Milwaukee on Tuesday to rest, but fell just short of his eighth triple-double for the Lakers in his return. He also took a nasty spill in the final minute, but got up and returned to the game.

McGee, the veteran big man with two championship rings from Golden State, had the biggest offensive game of his 11-year NBA career. He went 15 for 20 from the field, repeatedly converting in the paint on 10 assists from James.

The Nets got another big game from Russell, who scored 27 points in the fourth quarter of a thrilling win at Sacramento three nights earlier.

Russell was well-liked by Lakers fans — but not by Magic Johnson, who dumped Russell in a trade to get rid of Timofey Mozgov’s onerous contract just a few months after the Hall of Famer took over the Lakers’ basketball operations in 2017.

Russell has grown into an All-Star in Brooklyn, while the Lakers have stayed in largely the same place in the standings despite adding James last summer.

The Lakers officially will miss for the sixth consecutive season, easily the longest streak in the 16-time NBA champion franchise’s history. The Lakers had only missed the playoffs five times in their first 55 seasons of existence before this current drought.

With 10 games left in the season, the Lakers already know they’re staying home again for the playoffs, even after adding James to the roster last July. James has played in the last eight consecutive NBA Finals, but he will miss the postseason for the first time since 2005, his second pro season with the Cleveland Cavaliers.

Lakers: Tyson Chandler got his first game action since March 2. … Kuzma hit a 3-pointer from half-court to beat the shot clock in the first quarter.