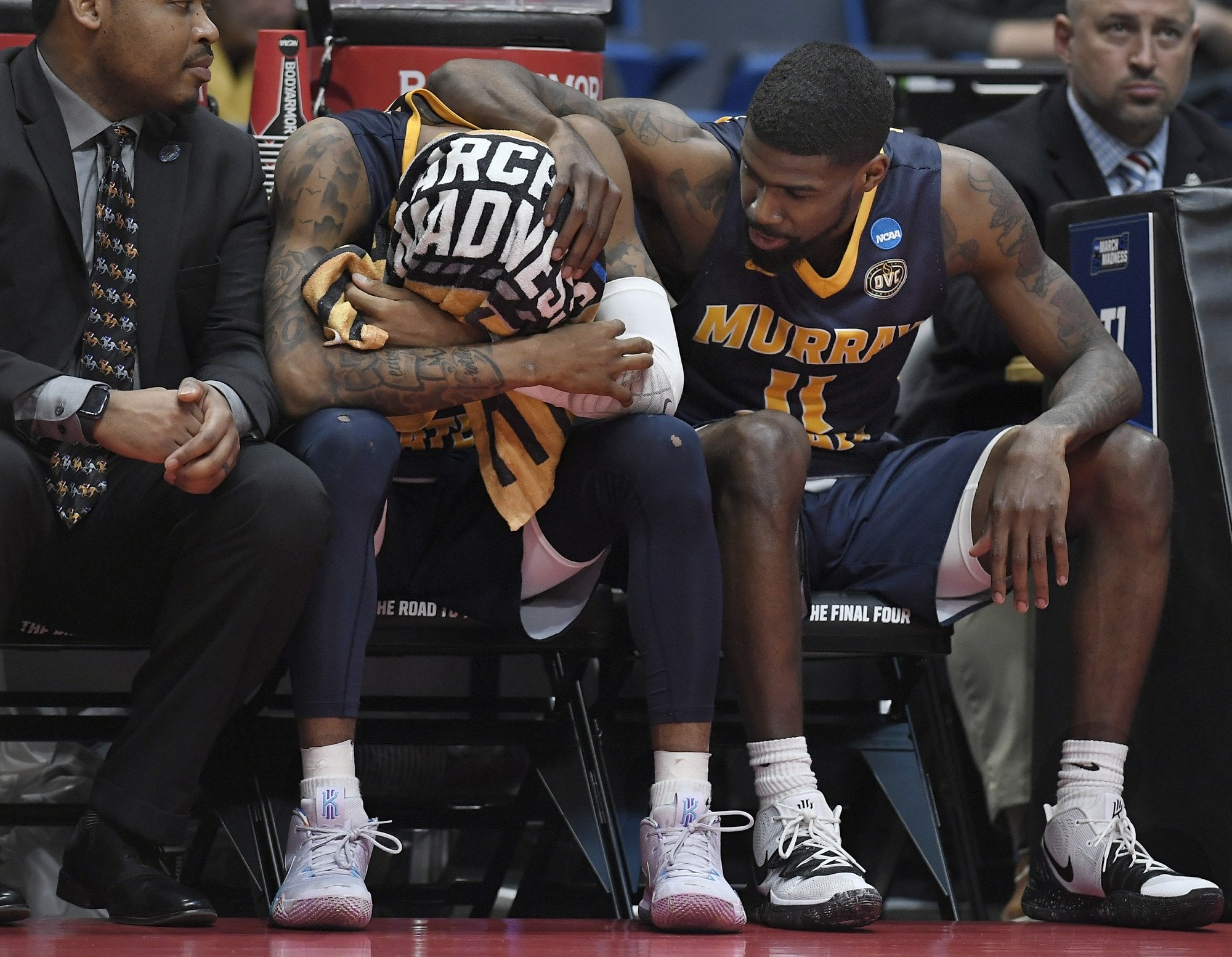 HARTFORD, Conn. — Ja Morant, perhaps sensing this would be his last opportunity to score for Murray State, turned on the jets and darted through three defenders for a driving layup.

That gave Morant 28 points and Racers fans one final thrill in a season full of them. Moments later, with Florida State way ahead and about a minute and half left on the clock, Morant came out of the game. He received a warm ovation from the Murray State fans, took a seat on the sideline and draped a towel over his head.

As the clock wound down on Florida State’s 90-62 victory against 12th-seeded Murray State in the NCAA Tournament on Saturday, Morant wondered what more he could have done for his team and what could have been.

“I was just hurt not being able to take the floor with these guys for the rest of this season, for another game or possibly two, three, four,” Morant said. “But it’s been a great season. I really was just thinking back on what all we have accomplished this year.”

Two days after Morant became the talk of the tournament with a triple-double that had NBA stars Steph Curry and Luka Doncic marveling at the sure-fire lottery pick, his breakout season ended with far less fanfare. He dazzled early, going 5 for 5 from 3-point range in the first half against the Seminoles, flashing his step-back and cross-over jumpers. He had 18 points at the half. But Florida State was winning everywhere else, forcing turnovers, getting into transition and knocking down 3s.

Morant had only four assists after notching 16 in the first round. He leads the country at 10 assists per game, and became the first Division I player to average double-digit assists and at least 20 points in a season. The Seminoles were determined not to let Morant pick them apart. The 3-pointers looked good, but as far as Florida State was concerned that was a good sign.

“We knew that eventually that’s not the way they want to play,” Florida State’s Terance Mann said.

Florida State coach Leonard Hamilton chuckled at the suggestion the Seminoles did good job on Morant.

“Because to be honest with you, I’m still not sure that we stopped Morant, and I’m not sure anybody can,” Hamilton said.

Morant was 2 for 9 in the second half. His only other bucket was, of course, highlight-worthy. The lanky 6-foot-3 point guard drove right at 7-foot-4 Christ Koumadje and flipped in a layup while getting fouled.

“I’m really just hard on myself. I’m never no good. I feel like I could have done a lot of things better tonight. Just pick my teammates up,” Morant said.

Stopping Morant is probably not going to be a problem for college coaches anymore. After being lightly recruited out of high school, Morant ascended to stardom this season as a sophomore, and is now projected to be a top-three pick. In a quiet locker room after the game, Morant dutifully said he has not made up his mind about entering the draft and was not sure when he would.

“I’m not focused on that right now,” Morant said “I’m just trying to celebrate a wonderful season with my teammates.”

Teammate Darnell Cowart made it pretty clear he was not expecting Morant to be back.

“Would you leave?” Cowart asked reporters after the game.

Murray State won two straight Ohio Valley Conference championships with Morant and made the NCAA Tournament twice. Morant was a promising freshman role player on last year’s team, but this season he blossomed into a sensation. His tournament triple-double, just the ninth recorded by the NCAA, turned him into a celebrity.

“I thought he was able to really do a tremendous job of blocking out all the noise and just staying focused on becoming the best player he could be,” Murray State coach Matt McMahon said.

Saturday marked the end for Murray State’s season, but Morant’s story seems to be just getting started.