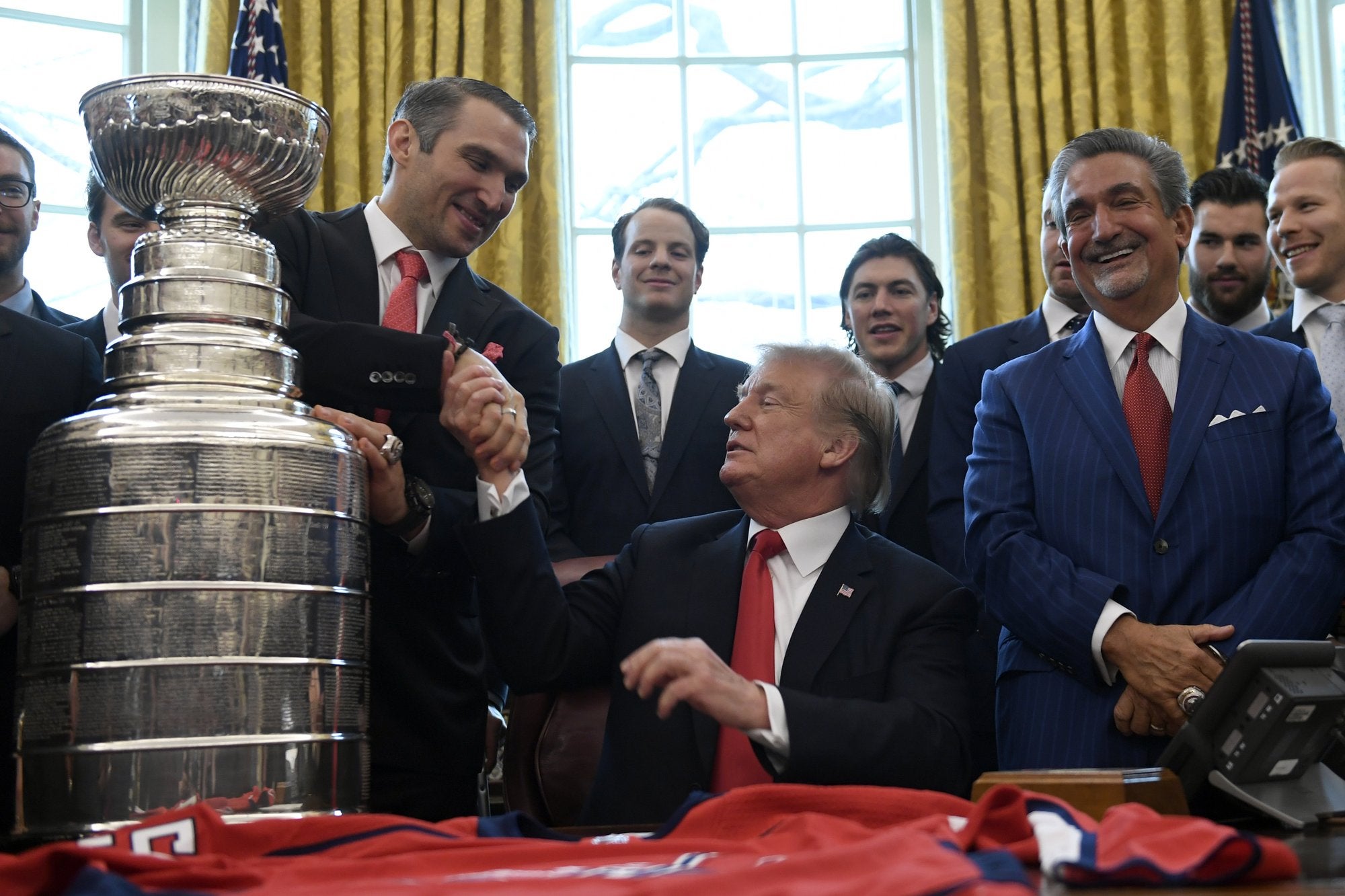 WASHINGTON — President Donald Trump welcomed Alex Ovechkin and the reigning NHL champion Washington Capitals to the Oval Office on Monday to congratulate them for winning the Stanley Cup in June.

Trump said it was an honor to host the team because he is a hockey fan and a Capitals fan. The president called the Capitals “winners” and said there is “an awfully good chance” they will repeat this season.

“You brought the Stanley Cup home,” Trump said. “Thousands of adoring fans greeted you. They were all over the place. And I have a feeling you’re going to be doing it again. You’re champions. You have a champion’s heart.”

Players, coaches and staff members took a private 45-minute tour of the White House and met with Trump in what was a last chance to be around hockey’s sacred trophy as defending champions.

“It’s a good reminder of the special things that our group did,” coach Todd Reirden said after practice earlier Monday. “That will kind of put a wrap on it and the final chapter of that moving forward into finishing up the regular season here and moving some of that success into playoffs this year.”

Two players on the current roster, Canadians Braden Holtby and Brett Connolly, and Devante Smith-Pelly, who is in the minors, did not visit the White House. Smith-Pelly in June cited Trump’s rhetoric, and Holtby last week said he had to stay true to his values and respectfully decline.

In the days since the team scheduled its visit, Holtby and his teammates explained their stances on going or declining while also shifting the focus back to the ice where the Capitals are trying to repeat as champions like the rival Pittsburgh Penguins did.

“The more important thing is we’re just gearing up for a playoff run, and (different decisions on going or not going are) not going to hurt team unity,” Holtby said Friday. “I hope they have a good experience there and then we can get back to hockey.”

The rest of the team was in attendance, along with NHL Commissioner Gary Bettman, Trump attorney Rudy Giuliani and counselor to the president Kellyanne Conway, who wore a Capitals Stanley Cup champions hat. Trump called daughter Ivanka a friend and fan of Ovechkin’s, compared him to Babe Ruth and also singled out owner Ted Leonsis and American defenseman John Carlson during his remarks.

“It’s huge honor for us to be here and meet you personally,” said Ovechkin, the Capitals’ Russian-born captain and playoff MVP. “We’re going to try to (win) again. We have same team, experienced team, very good group of guys and we’re going to try to do it again.”

The visit comes a day after Attorney General William Barr released a summary of special counsel Robert Mueller’s report that found no evidence Trump’s campaign “conspired or coordinated” with Russia to influence the 2016 presidential election but reached no conclusion on whether Trump obstructed justice. Trump did not take questions from reporters.

Several Capitals players said going to the White House wasn’t about politics. American Brooks Orpik, who went in 2009 with the Penguins to visit then-President Barack Obama, said the decision to go is “not an endorsement of whoever’s in the office.”

The Capitals presented Trump with a red No. 45 jersey and a gold, engraved stick. Trump took individual pictures with players and staff and gave them pens and M&Ms before they left.

Leonsis called visiting the Oval Office a “true thrill for all of the players and the organization.”

Carlson said: “It’s an honor to be here. I think all of us looked very much forward to it.”

The Capitals’ White House visit came nine-plus months after their first title in franchise history and with six games left in the regular season before the playoffs begin. Washington is in first place and again is a top contender.