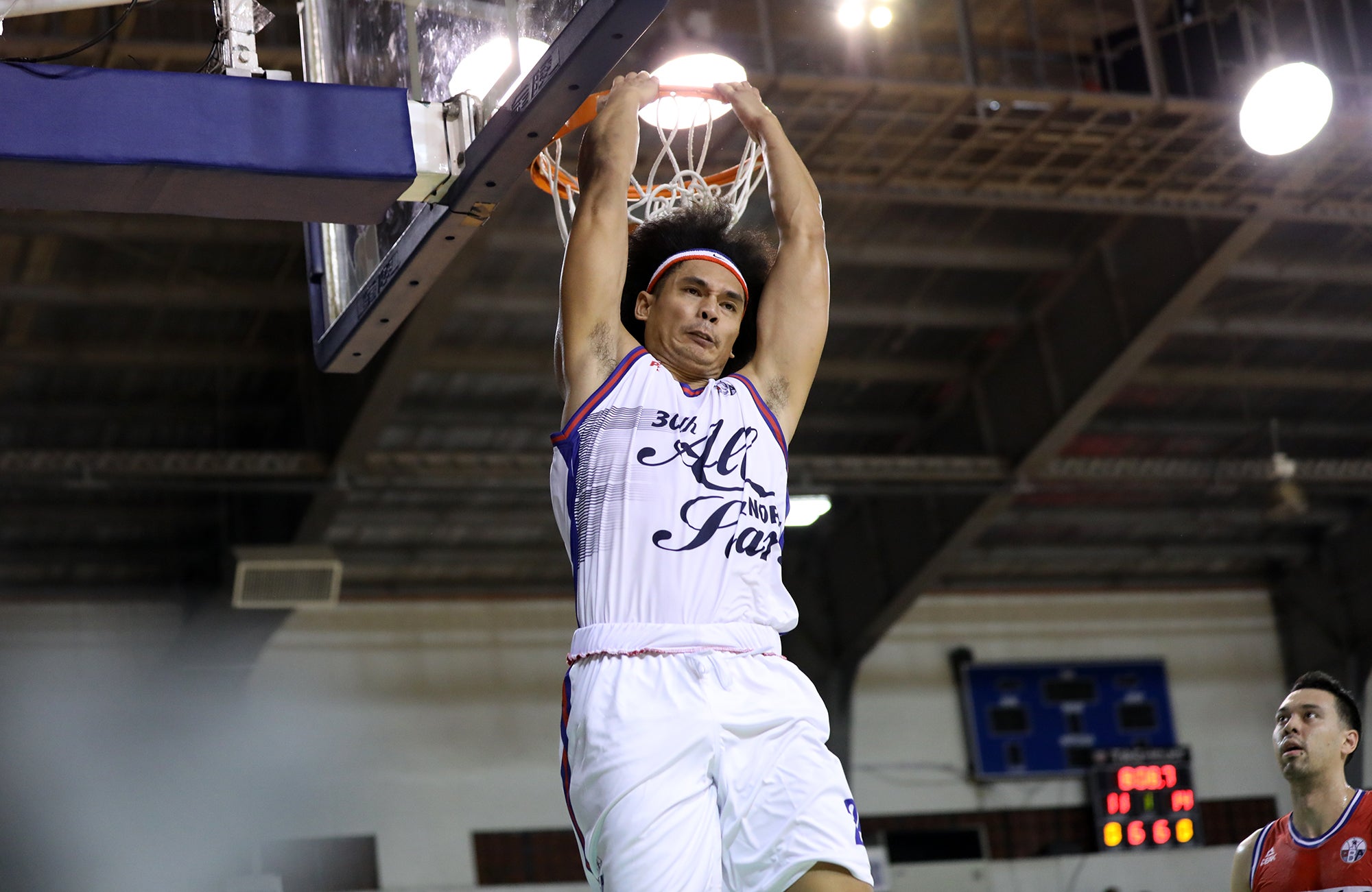 Japeth Aguilar skies high for a jam during the PBA All-Star Game on Sunday. PBA IMAGES

CALASIAO, PANGASINAN—The specialties of the house were triples and dunks. When a team couldn’t shoot one, it looked for the other.

Looking to cash in on a promoter’s charitable promise, the North and South teams combined for a record 45 triples plus 37 dunks on Sunday night, the combined number of which translated into wheelchair donations from the PBA All-Star game at Calasiao Sports Complex here.

Officially, the listed winner of the annual match was the North squad, which scored 51 points in the first quarter on the way to a 185-170 victory.

But it was a triumph of charity as well. Two days after promoter Double V Productions pledged 44 wheelchairs for the combined dunks and triples from the Rookie-Sophomore vs Juniors exhibition, the showcase match drew 82 more wheelchairs for the Alagang PBA foundation.

Also emerging a winners were Japeth Aguilar and Arwind Santos, who were named co-MVPs of the game. Not coincidentally, both were the top suppliers of dunks and threes, with Santos providing a little of both—on purpose

“Of course, it makes it more meaningful that not only do we make people happy, we also get to donate to charity,” Santos said in Filipino. “So we really made a conscious effort to make threes and dunks.”

Santos mixed xx threes with several of his patented Spiderman dunks—which are usually banned during official PBA matches. The co-MVP award, he said, was just icing on the cake.

“I thought the MVP would go to Japeth,” sais Santos, who finished with 34 points and 17 rebounds for the North squad.

Aguilar, the Barangay Ginebra beanpole, provided the thrills and cheers the entire night with an array of slams, including one that brought the house down because it came over a particularly huge defender: Five-time MVP and South center June Mar Fajardo.

“We talked about that with June Mar,” Aguilar said in Filipino. “We wanted as many dunks in as possible.”

Paul Lee was also a significant wheelchair contributor with his nine triples—an individual all-star record—to finish with 27 points for the North squad.