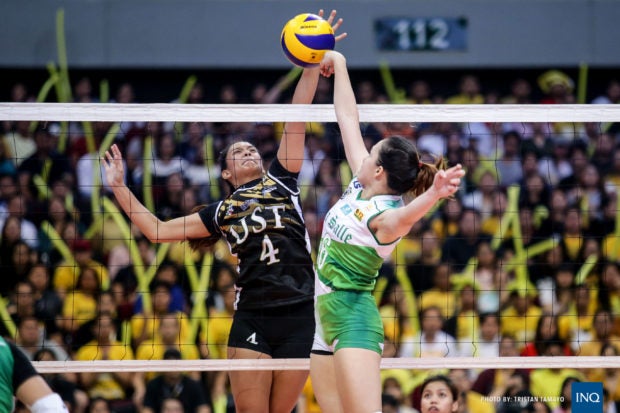 La Salle proved on Sunday night that good, old fashioned teamwork and a winning mindset can silence the most explosive firepower in the league.

Desiree Cheng unloaded a career-high 20 points on awkward but well-placed shots to power the three-time defending champion Lady Spikers to a 21-25, 25-23, 25-19, 26-24 triumph over University of Santo Tomas and into solo second spot in the UAAP women’s volleyball tournament at Mall of Asia Arena.

The veteran open hitter, better known for high volleyball IQ than power, typified the Lady Spikers’ maturity in recovering from an error-prone first set to systematically cut down the Tigresses powered by Sisi Rondina and Eya Laure.

La Salle is now within striking distance of league-leading Ateneo with a 7-3 record while UST slid to 6-4.

For a while, it looked like the Tigresses were on their way to duplicating a first round victory over the Lady Spikers, who got their acts going in a tight second set to gather much-needed confidence.

The Lady Bulldogs, who upped their record to 3-7, sent the Lady Falcons deeper in the standings at 1-9.

In exacting revenge over the Tigresses who beat them via straight sets in the first round, the Lady Spikers also scored back-to-back wins they hope would carry them deep in the second round of eliminations.

Fully aware of UST’s formidable edge in manpower, La Salle coach Ramil de Jesus instructed his wards to stick with the age-old system of containing their errors and firming up defense while doing a masterful job of shuffling his charges on the floor and keeping them fresh.

In the third set, La Salle worked its way up from 9-12 with 10 unanswered points, tilting the complexion of the match decisively.

La Salle’s back-to-back kill-blocks sealed the win after UST managed to extend the fourth set through belated efforts of its large-scale scorers Rondina and Laure.

Laure scored 21 points, while Rondina had 19 but UST failed to get significant help from Dimdim Pacres, Caitlyn Viray and Kecelyn Galdones which turned their offence askew.

On the other hand, La Salle had Aduke Ogunsanya who had 13 points, including the massive block on Laure that ended the match.