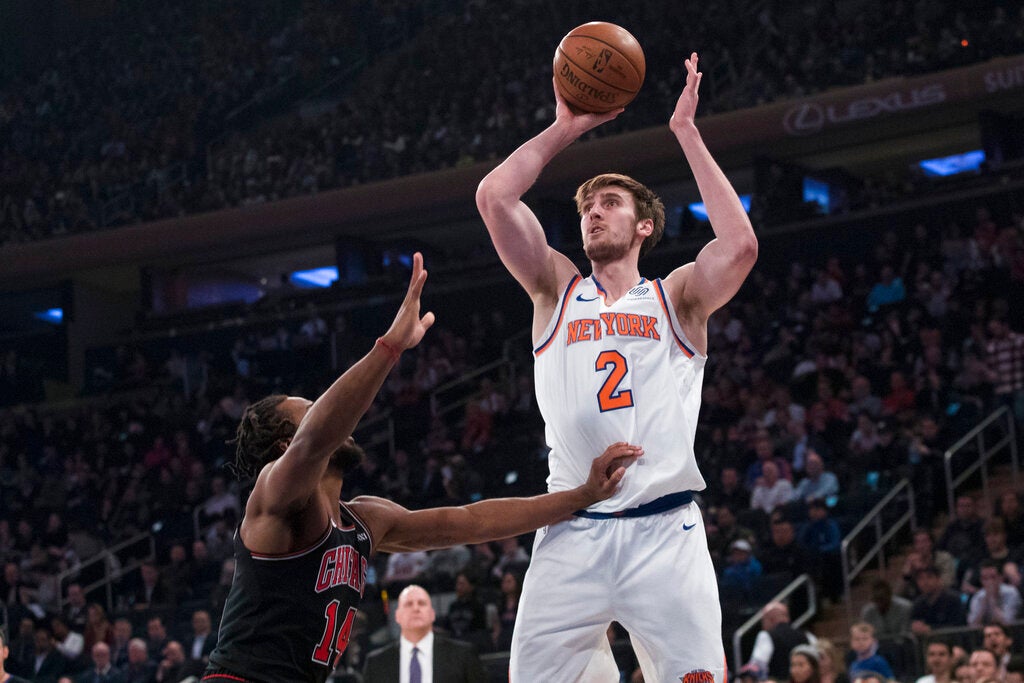 NEW YORK — In a matchup between two of the NBA’s worst teams, the New York Knicks were a little better.

Luke Kornet scored a career-high 24 points and the Knicks ended a six-game losing streak with a 113-105 victory over the Chicago Bulls, who lost for the fifth straight time.

“I just told the guys to hang in. Execute,” Knicks coach David Fizdale said. “Just get the guys to calm down and play the game.”

New York took its largest lead of the game at 59-31 on Mitchell Robinson’s free throws with 6:04 left in the second quarter.

“We were moving the ball, getting out in transition and playing together,” said Dotson, who was 6 of 7 from 3-point range. “When we move it like that, we get more shots and we are more efficient.”

Chicago scored the next six points and pulled to 64-47 at halftime.

The Bulls drew within single digits for the first time since midway through the first quarter when Timothe Luwawu-Cabarrot hit three free throws to make it 93-84 with 9:24 remaining.

The Bulls got as close as 112-105 on Sampson’s two free throws with 46 seconds left, but they did not score again.

Robinson added 14 points and 10 rebounds for the Knicks.

Wayne Selden Jr. scored 11 points and Luwawu-Cabarrot finished with 10 for Chicago, while Shaquille Harrison had 10 rebounds.

Kornet was 8 of 11 from the field and 5 of 7 from beyond the arc as the Knicks shot 47.4% on 3-pointers and 50% overall. He was starting in place of DeAndre Jordan, who did not see action for the second straight game as Fizdale gives a longer look at Robinson and Kornet.

“It’s always valuable to get on the court,” Kornet said. “I feel like the only time you can improve is to play in the games. Every single minute is valuable.”

Bulls: Chicago leads the series 122-106. They are only 45-65 on the road against New York after splitting the last four meetings at Madison Square Garden.

Knicks: New York is 0-26 when scoring less than 100 points. The Knicks have allowed at least 100 points in all but four games this season. … Kadeem Allen left the game in the second quarter and did not return (concussion). . Dennis Smith Jr. was scratched prior to the game when “his back tightened up,” according to Fizdale.

Robinson blocked three shots and has 150. He has recorded at least one block in 34 straight games and has already set the Knicks franchise record for most blocks in a season by a rookie. The last time he failed to block a shot was on Dec. 12 against the Cavaliers.