Comeback Cavs! A year after pain, Virginia gets its NCAA title | Inquirer Sports

Comeback Cavs! A year after pain, Virginia gets its NCAA title 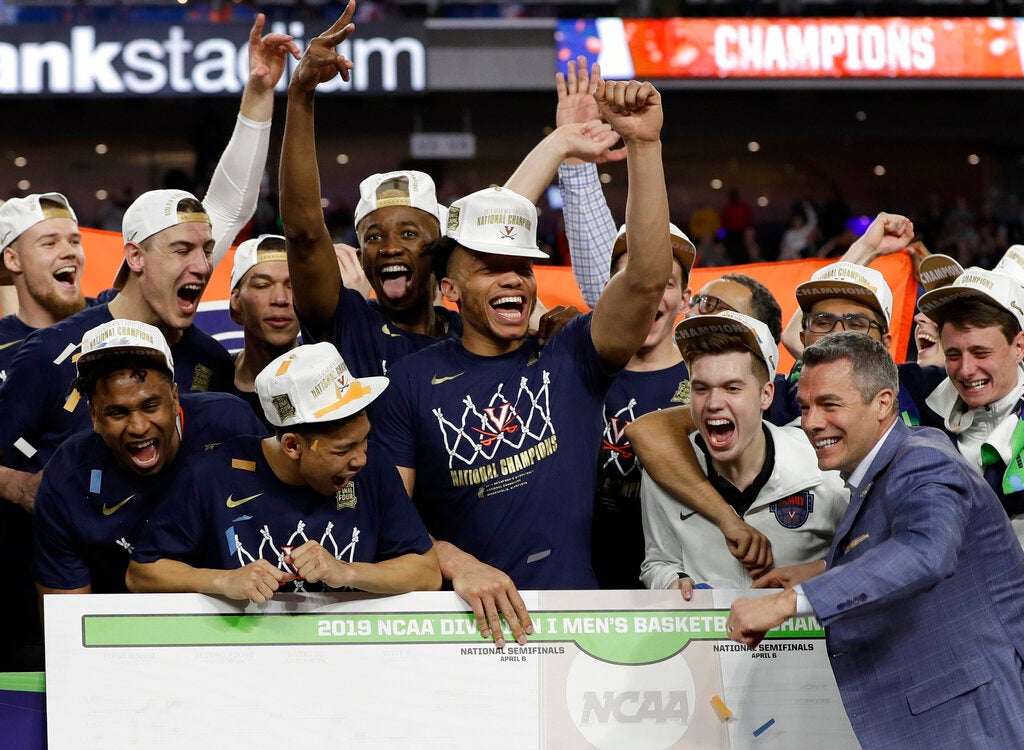 MINNEAPOLIS— It was an easy question to ask, even if the answer was tough to absorb.

It dogged Virginia for a year and three weeks — following the Cavaliers through sweat-soaked practices, hostile arenas up and down the East Coast, on talk radio and pundit-driven TV, and in their own, doubt-filled, uncertain minds.

The only truly satisfying answer to “Why?” came Monday night — and with the confetti falling and the nets dangling around their necks, it all seemed so clear.

That humbling, history-making loss last season to Maryland-Baltimore County happened so the Cavaliers could stand at center court and celebrate this time around.

The only top seed to fall to a No. 16 in the history of the NCAA Tournament is now the only team to come back from such a loss and win a championship the very next season. Virginia did it the hard way, squandering a 10-point lead against a tenacious Texas Tech team, only to pull away for an 85-77 victory in overtime.

And now, there are no more questions.

“We’ve all had our own battles,” said Virginia guard Kyle Guy, who was named the Final Four’s most valuable player. “I said earlier, it’s a really special group because we all had the same ‘Why?’ among other ‘whys.’ But to share the same one, and to battle everything we battled through, and come out on top, it’s a fantastic feeling.”

University of Virginia students packed the streets of Charlottesville on Monday night after the Virginia Cavaliers defeated the Texas Tech Red Raiders 85-77 in overtime to win the NCAA college basketball championship. (April 9)
Tap to unmute
It’s tempting to call Virginia a team of destiny, but that would undermine what the Cavaliers accomplished this season. It would give short shrift to the way they overcame so many close calls in this tournament, including an entertaining, back-and-forth final against an opponent that simply would not go away.

Lottery-pick-in-waiting De’Andre Hunter scored a career-high 27 points after starting the game 0 for 7 from the floor. Going mano-a-mano against another likely NBA-bound star, Jarrett Culver, Hunter saved the Cavaliers (35-3) with a game-tying 3 with 12 seconds left in regulation, then helped them win it with a go-ahead 3 with 2:07 left in the overtime.

Hunter’s game-tying shot came on a play that Texas Tech doesn’t usually allow: Ty Jerome dribbled into the middle, then skipped a pass down the baseline to Hunter, who spotted up from the corner. The nation’s best defense hardly ever leaves someone that wide-open.

“With a 3-point lead … we’re trying to play really sound defense with three objectives: No 3-point shots, no ‘and-ones,’ and we’ve got to secure the defensive rebounds,” Texas Tech coach Chris Beard said. “We just came up a little bit short, but give Virginia credit. They have a really, really good team. So much poise, and just have a lot of respect for them.”

The poise showed up earlier in the tournament, too.

First, when the Cavaliers, a 1 seed again, fell behind by 14 early to No. 16 Gardner-Webb in what seemed like a repeat of the nightmare from the year before. They won 71-56.

Next, against Purdue, when, trailing by 2, the Cavaliers intentionally missed a free throw, got the ball back and fed to Mamadi Diakite, who beat the buzzer to send the game into overtime. They won 80-75.

And then in the semifinal Saturday against Auburn, when Guy got fouled while shooting a 3 with 0.6 seconds left, and calmly sank all three free throws. They won 63-62.

“I hope that it’s a message for some people out there that there can be hope and joy and resiliency,” said Virginia coach Tony Bennett, whose father Dick, the coach who wrote the book on stifling man-to-man defense, was in the crowd. “I’m thankful for what happened.”

All Virginia fans are.

This is a program that has lived a tortured existence, starting around Christmastime in 1982, when 7-foot-4 Ralph Sampson — as good as they came back in his day — was headlining the top-ranked Cavaliers on a stopover trip in Hawaii, only to get shocked by tiny, NAIA Chaminade. It still goes down as one of the greatest upsets in sports.

Thirty years later, Bennett turned the Cavaliers into contenders again, but they always underachieved once the calendar turned to March.

That loss to UMBC could’ve wrecked a lesser program.

Somehow, this one got stronger.

Has the pain gone completely away?

“You have a scar, and it reminds you of that, but it’s a memory,” Bennett said. “Does it go away completely? No. I wish it wouldn’t have happened in some ways. But now I say, ‘Well, it bought us a ticket here. So be it.’”