Warriors start playoff road, without LeBron James there at the end 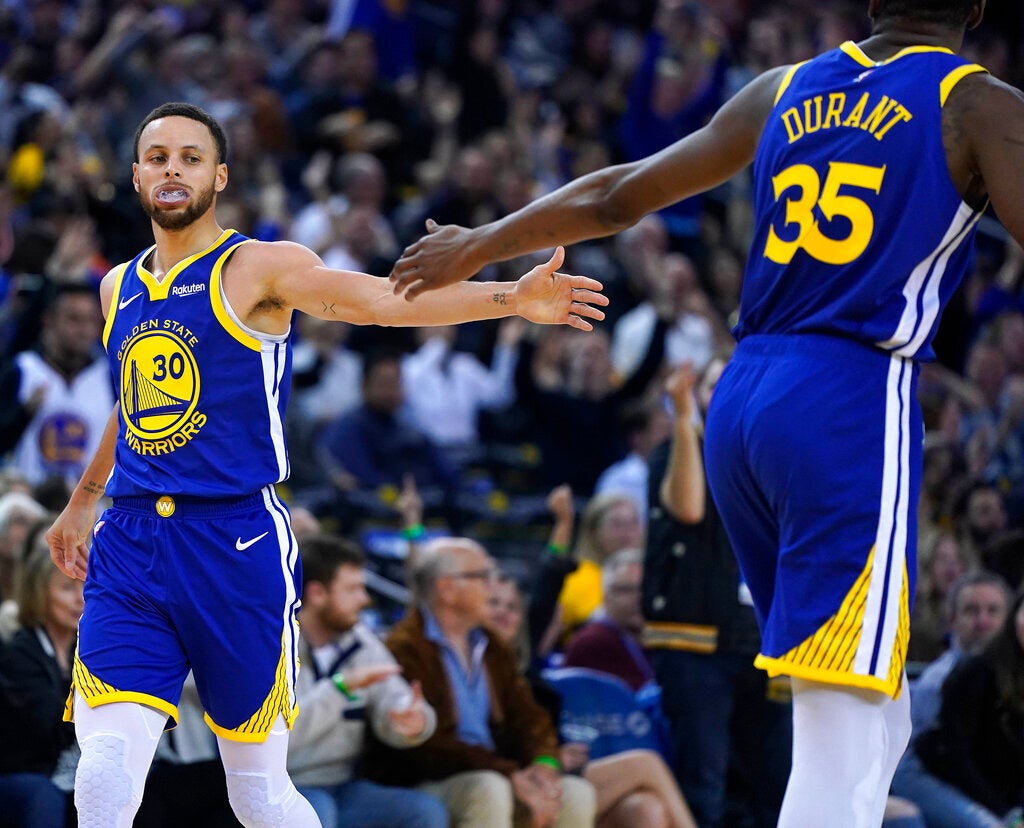 Golden State Warriors’ Kevin Durant (35) high-fives Stephen Curry (30) after Curry made a 3-point shot against the Cleveland Cavaliers during the second half of an NBA basketball game Friday, April 5, 2019, in Oakland, Calif. The Warriors won 120-114. (AP Photo/Tony Avelar)

The Golden State Warriors are set to begin their quest for a third straight title, and this time it’s up to someone else to try to stop them.

With LeBron James gone to the West and this year gone entirely from the postseason, the Eastern Conference headquarters for the NBA Finals won’t be in his home for the first time since 2010.

He played for the title for eight straight years, which may have been great for the TV ratings but lately wasn’t much good for the competition. The Warriors swept Cleveland last year after winning 4-1 in 2017.

Teams are lining up to seize his old spot atop the East, all capable of providing the intrigue that was absent the last couple years.

There’s Milwaukee, with Giannis Antetokounmpo in position to exit June fully atop the NBA with a title and an MVP award.

Or Toronto, humiliated by the Cavaliers in the last two years but armed now with a former NBA Finals MVP in Kawhi Leonard.

It could be Philadelphia, with Joel Embiid and Ben Simmons anchoring perhaps the most talented starting five outside of the Bay Area.

And don’t forget Boston, the presumptive East favorite in the preseason that can still live up to expectations.

The best player is gone, but maybe things will be better.

“I think the parity and the competition in the East, and not knowing and everyone having a sincere chance maybe in the East that did not, when not you look between Toronto, Boston, Philadelphia,” TNT analyst Chris Webber said. “All of those story lines, new young stars that’s coming in.”

The long road to get to the finals begins Saturday with four games, including the top-seeded Warriors against the Los Angeles Clippers in the West. No. 2 Denver faces No. 7 San Antonio in the other West opener, while No. 3 Philadelphia meets No. 6 Brooklyn, and No. 2 Toronto takes on No. 7 Orlando in the East.

On Sunday, the overall No. 1 seed Bucks face No. 8 Detroit, and No. 4 Boston hosts No. 5 Indiana in the East. In the West, No. 3 Portland and No. 6 Oklahoma City meet in a matchup of Northwest Division rivals, and No. 4 Houston and No. 5 Utah square off in the opener of a series between two of the strongest teams in the second half of the season.

It’s the start of postseason that looks different far beyond just the absence of James for the first time since 2005.

The Warriors, of course, haven’t just been going to the postseason every year, but getting all the way to the finals once they do. They’ve done that four straight years, winning three of them, and with a strong finish after some occasional lapses surged to the best record in the West.

Still, this playoff path could provide them plenty of obstacles. The Warriors may need to get by scoring champion James Harden and the Rockets, who took them to a seventh game last year in the conference finals, just to get back to that round this time.

“It doesn’t matter who you play in the playoffs, you’re going to get tested. Everybody’s good,” Golden State coach Steve Kerr said.

Get out of the West, and the Warriors may have to then get on a plane. They had home-court advantage in all four finals against Cleveland, but Milwaukee and Toronto both finished with better records and would host Games 1 and 2 if they win the East.

And there could be the distractions about their future, with Kevin Durant and Klay Thompson able to become free agents this summer.

The Warriors wouldn’t be alone when dealing with that. Toronto (Leonard), Philadelphia (Jimmy Butler and Tobias Harris) and Boston (Kyrie Irving) all will be trying to win a title with players who could then leave them.

But those are issues for July. First, it’s all about just getting to June.

“It’s a great feeling,” Bucks All-Star Khris Middleton said. “Playoffs don’t always come around. I’ve been a part of that couple years but it’s been a great season so far. I know guys been itching to get to this first playoff game.”