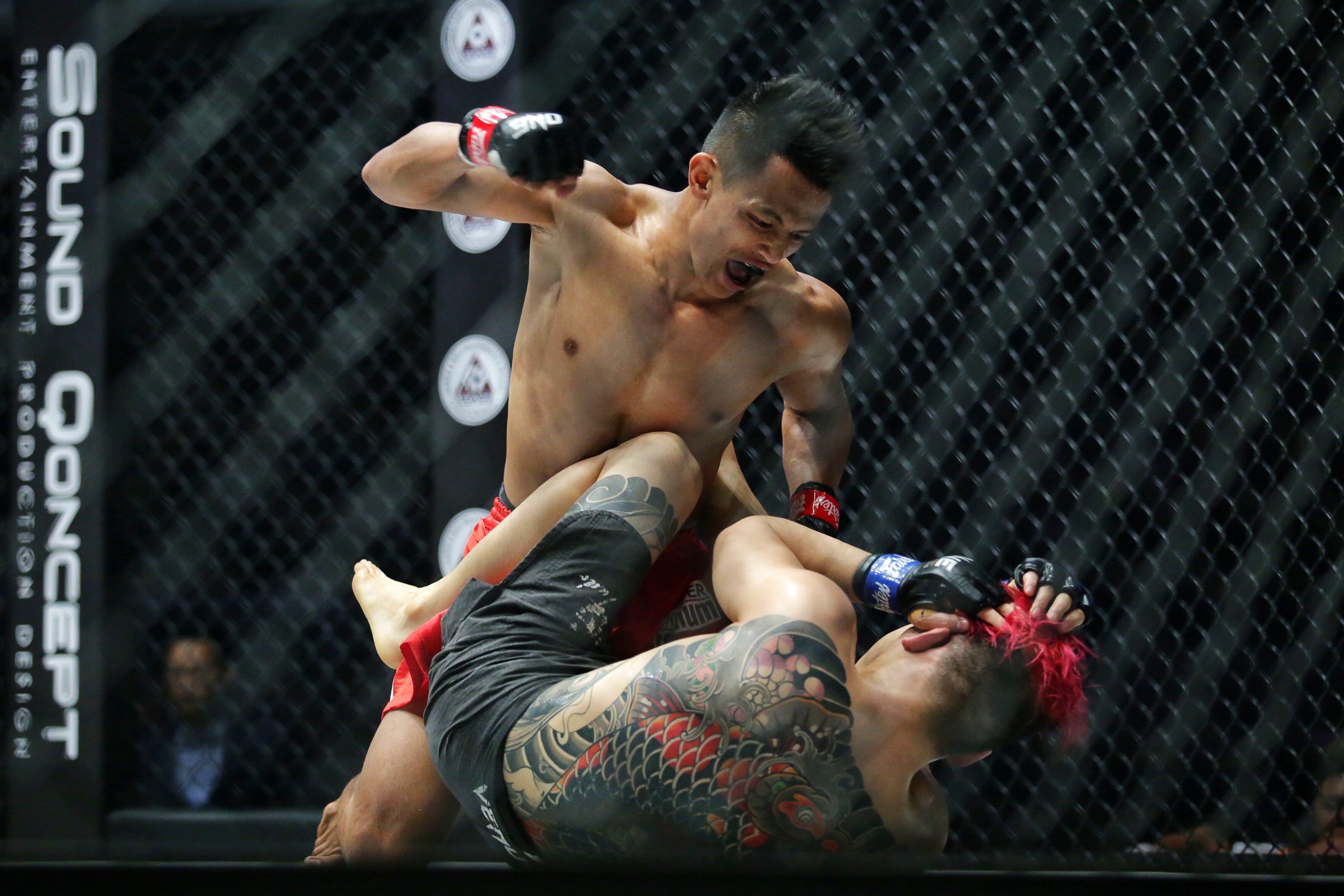 Edward Kelly vs Sung Jong Lee in ONE: Roots of Honor. Photo by Tristan Tamayo/INQUIRER.net

MANILA, Philippines—Team Lakay’s Edward Kelly scored an impressive technical knockout over South Korea’s Sung Jong Lee, ending the featherweight bout just 2:51 into the second round in ONE: Roots of Honor Friday at Mall of Asia Arena.

Kelly recovered from his yellow card infraction late in the first round after he landed an illegal kick to the face of Jung when the two of them were tangled up on the mat.

Come the second round, Kelly took things to the next level and went on the offensive forcing Sung to the mat.

Sung initially got hold of Kelly’s right foot but the Team Lakay veteran managed to slip out of it and proceeded to carry out his own striking offensive.

The 35-year-old Filipino fighter rained down heavy punches from above but Sung bore through it all.

It wasn’t until the halfway point of the round that Kelly truly dominated from the ground forcing the referee to call a stop to the contest.

“I’m confident I can escape or tolerate his leg locks because I knew that the legs of Filipinos are strong,” said Kelly.

This was a big bounce back win for Kelly (12-6) after losing to Singapore’s Christian Lee on Jan. 19.

Sung dropped his fourth straight fight and slipped to a 2-5 record overall.

Read Next
Gymnast on her gruesome injury: ‘My pain is not your entertainment’
EDITORS' PICK
Mallorca City: Home of Cavite’s finest industrial hub
When skincare meets makeup: Introducing the BYS Cosmetics Full Coverage line
Here’s How Protein and Calcium Deficiency Can Affect Your Kid’s Health
ABS-CBN apologizes to Duterte for 2016 election ad mess
Bong Go demands ‘fair reporting’ from ABS-CBN but will appeal to Duterte to save jobs
Franchise of media giant to go on Guevarra tells senators
MOST READ
Duterte: Set aside petty political differences to ensure Edsa legacy lives on
Jordan: ‘When Kobe Bryant died, a piece of me died’
Los Angeles honors Kobe, Gianna Bryant with public memorial
ABS-CBN apologizes to Duterte for 2016 election ad mess
Don't miss out on the latest news and information.