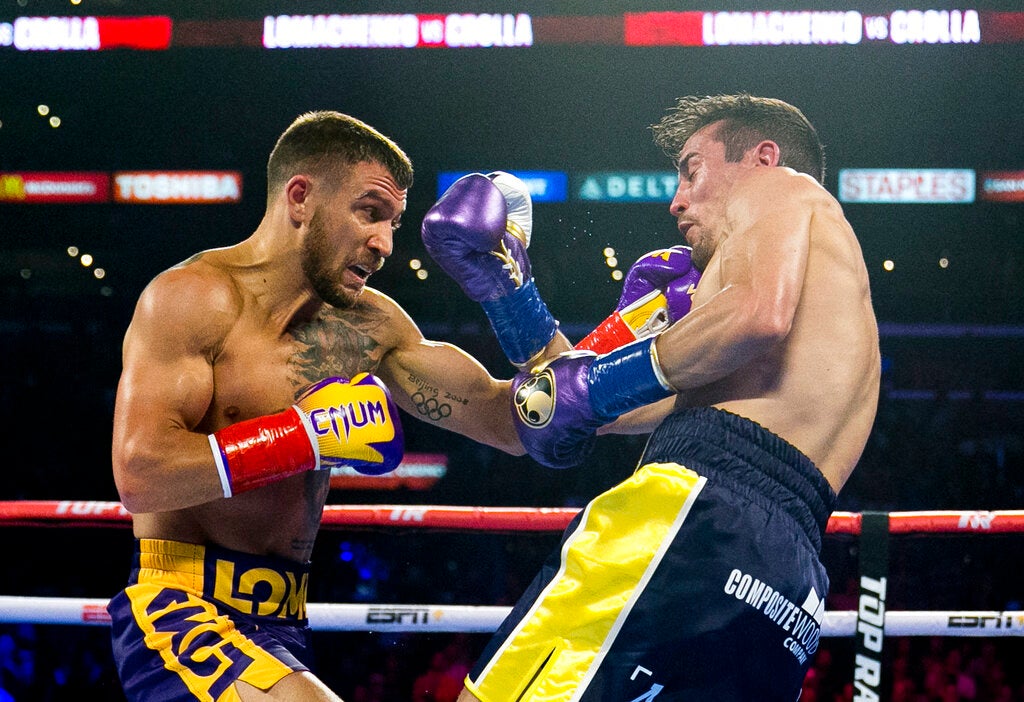 LOS ANGELES— Vasyl Lomachenko wanted a bigger challenge and a more prominent opponent than Anthony Crolla for this Hollywood showcase.

When he couldn’t get one, the lightweight kingpin took it out on his overmatched foe.

Lomachenko defended his WBA and WBO 135-pound belts with a violent fourth-round stoppage of Britain’s Crolla on Friday night, demonstrating his pound-for-pound excellence with another virtuosic display.

“For me it was very comfortable, because I worked with two hands,” Lomachenko said. “By the second round, I knew it was going to be good for me.”

Lomachenko (13-1, 10 KOs) brutalized the mandatory challenger for his WBA belt throughout their brief fight, and the Ukrainian nearly ended it late in the third round when he knocked Crolla into the ropes.

Lomachenko started to celebrate by leaping on the ropes, but referee Jack Reiss allowed the fight to continue to the bell. Lomachenko shook it off and finished crisply after the break, ending it with a right hand that dropped Crolla face-first onto the canvas with an apparently broken nose.

“I thought it will be very hard for me, because his style is always in defense,” said Lomachenko, still smiling despite a cut near his left eye from a fourth-round head butt. “I always need to find a key for his defense. After the second round, I understand him, and it is what it is.”

Even when Lomachenko can’t get an ideal opponent, he still puts on a show — and the raucous crowd of 10,101 at Staples Center enjoyed it.

While he waits for the promotional stars to align for a big-money showdown with Mikey Garcia, Lomachenko had hoped to take on Richard Commey in a three-belt unification fight in this matchup. Commey’s injured hand forced Lomachenko’s promoters to make this fight with Crolla, rather than surrender his WBA belt.

Lomachenko then showed why it was a bad idea for Crolla (34-7-3), whose toughness wasn’t enough.

Although Crolla retreated and dodged Lomachenko’s attacks from the opening minute onward, Lomachenko picked apart Crolla’s defense with his peerless combination of athleticism and technique, working the body and head with equal aplomb.

Crolla couldn’t escape Lomachenko’s combinations on the ropes late in the third round, but made it to the bell at Reiss’ discretion. Nothing got better in the fourth, and Lomachenko hurt Crolla before finishing him in dramatic fashion.

“I’ve been doing this for well over 50 years, and I’ve never seen anything like that guy,” said Bob Arum, Lomachenko’s Hall of Fame promoter. “He’s almost breathtaking.”

Lomachenko headlined at Staples Center for the first time in his brief professional career. The Ukrainian has developed a significant fan base in the boxing-savvy Los Angeles area, where he lives and trains.

“I feel at home here,” Lomachenko said. “I feel like I’m in Ukraine here.”

Lomachenko’s profile has grown exponentially in recent years as he headlined at Madison Square Garden, in Macau and other Los Angeles-area venues before his step up to Staples. Lomachenko’s next fight is likely to be even bigger, whether as a unification bout or a showdown with one of the other lightweight greats of this era.

“I want Mikey Garcia, (but) I want to unify titles,” Lomachenko said. “That’s my goal. I want historic fights.”

In the co-main event, longtime super middleweight champion Gilberto “Zurdo” Ramírez remained unbeaten when his light heavyweight debut against Tommy Karpency was stopped by Karpency’s corner before the fifth round.

Karpency got in the ring with a black eye, and his nose was damaged early by Ramírez, the rangy puncher who had just one previous stoppage victory since 2014. Ramírez appears determined to make a career at 175 pounds instead of returning to 168, where he has dominated most of his competition for a few years.