Muscles bulging and veins popping, two Chinese arm wrestlers lock eyes and then their hands, until the referee shouts “Go!”

Already considered a serious sport in many parts of the world, arm wrestling has generally been viewed in China as a testosterone showdown between inebriated bar patrons. 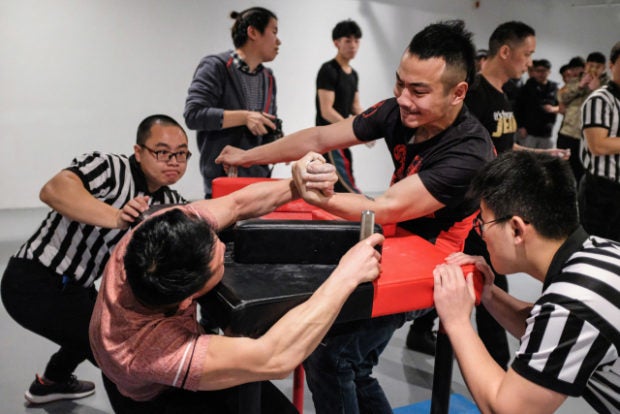 But it is gaining an arm hold with fan associations in more than 100 Chinese cities, said Ye Ming, founder of Shanghai Arm Wrestling.

More than 100 competitors took part in the recent 7th Shanghai Arm Wrestling Open, which calls itself the first in China carried out under the auspices of the Professional Armwrestling League’s international ranking system.

“Arm wrestling is a way to shake hands and communicate face-to-face,” said Ye, a top-ranked left-hander.

And while China lags the U.S., Japan and Europe, it is the fastest-growing country in terms of participation, he said.

The bespectacled 37-year-old is an unlikely champion.

And while he enjoyed arm wrestling as a child, he only came to the sport as an adult after falling critically ill.

Eight years ago he developed viral encephalitis and slipped into a coma for two days, with doctors warning it was unlikely he would survive.

But he made a remarkable recovery and while he was not able to take on the exertion of more intensive sports, he found arm-wrestling provided a full body work out that he could manage.

With proper technique and mental strength, “a skinny guy can defeat a muscular guy”, said Ye.

“At first, people are attracted by the grueling and eye-catching moments. Those get them in the door, but once they look deeper, it is the intricacy of the sport and the inclusiveness of the community that keep them there,” he explained.

Since its founding in 2012, Shanghai Arm Wrestling has grown from four members to more than 500, ranging in age from 17 to 63 and including four women.

Members gather weekly to work on their technique, using specially designed tables with elbow pads and a metal bar fixed to each side for competitors to grip with their free hand.

Li Rongyi’s right leg was partially disabled by childhood polio, ruling him out of many sports — but not arm wrestling.

“I can wrestle as long as I have hands. I feel equal to others” said Li, a primary school English teacher who has wrestled competitively for seven years.

Li has also been an international referee since last year and like many aficionados, hopes to see the sport added to the Paralympics.

He said: “We’re trying to change the public’s impression of arm wrestling. It’s a legitimate sport, not just for entertainment.” NVG

No arms? No problem for table tennis Paralympian