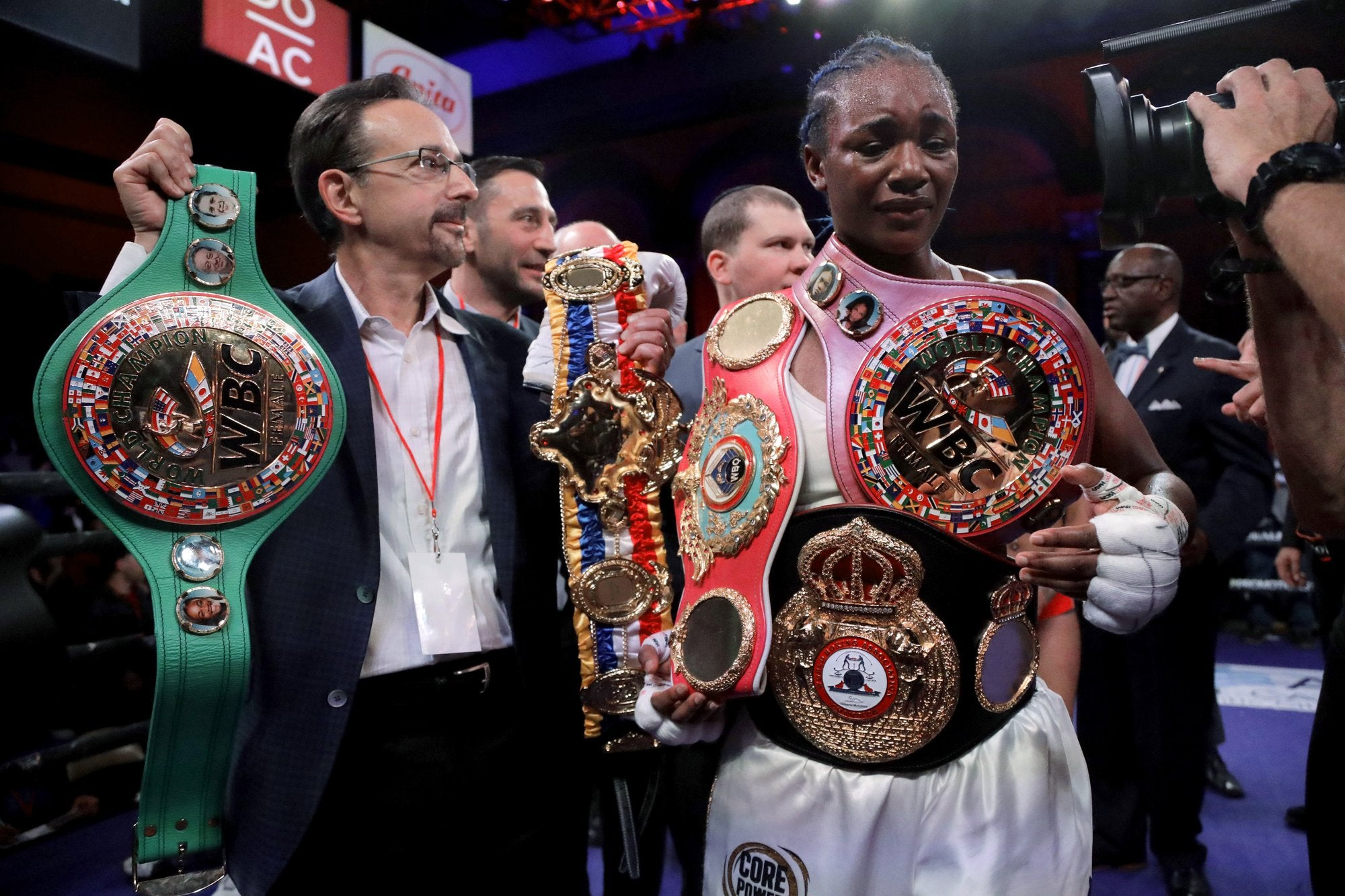 ATLANTIC CITY, N.J. — Claressa Shields tossed one championship belt around her neck, fastened another around her waist and draped one more over a shoulder.

She had about run out of room for all her titles.

At least the ones she can use as accessories. Shields staked her claim as the top middleweight in boxing and maybe even as the GWOAT — yes, the Greatest Woman Of All Time. She may not be there yet, but with more beatings like the one she put on Christina Hammer, Shields may soon earn that coveted title.

Shields used her speed and power to push to the brink of a knockout as the two-time Olympic gold medalist remained undefeated with a unanimous decision over Hammer in a middleweight championship bout and one of the most anticipated fights in women’s boxing history.

Shields (9-0) held three versions of the 160-pound title and snagged Hammer’s slice of the division championship to unify the belts Saturday night at Boardwalk Hall. The charismatic Shields had a few thousand fans on their feet — and A-listers rooting her on from home — to give herself plenty of gold to strap around her waist to go with the medals around her neck.

“I am the greatest woman of all time. Give me that,” Shields said in the ring. “Women’s boxing, we’re on fire. I can’t wait to see the next super fight.”

Odds are she’ll be in it.

Undefeated and undisputed, the 24-year-old Shields won 98-91 on two cards and 98-92 on the other, and was simply dominant over 10 two-minute rounds.

“I feel like I’m dreaming,” Shields said. “I knew I could hurt her. I thought I finished her around round 8. I was so pumped.”

Hammer’s mouthpiece went flying in the eighth round — she may have spit it out — when she absorbed more blows to the face that left her reeling and with about no chance for a comeback.

Shields, out of Flint, Michigan, nailed Hammer with a flurry of shots to close the eighth round and had the fans howling for “T-Rex!”

Shields won Olympic gold in 2012 at London and 2016 in Rio, and hasn’t lost since 2012 as an amateur. Shields has made it a mission to revolutionize women’s boxing the way Ronda Rousey became a mainstream star in mixed martial arts. There have been more accomplished female fighters — Laila Ali, Christy Martin, Lucia Rijker top the short list — but no bout has quite matched this one in anticipation or potential historic significance.

Martin, who fought on cards headlined by Mike Tyson other heavyweight champions, was in attendance and Oscar winning actress Halle Berry tweeted her support.

“Tonight is one of the biggest fights in women’s middleweight boxing – I’m so proud that this moment has arrived, and am even more proud of my dear sweet STRONG friend @Claressashields! Make some history tonight, CHAMP!!” Berry tweeted.

Her blue ponytail bouncing off her neck, Shields handed Hammer (24-1) the first loss of her professional career. Hammer piled up wins for a decade in the 160-pound division without much fanfare.

“I didn’t fight very good or fast,” Hammer said. “That’s boxing, anything can happen. I wanted this fight. She won, respect to her. She’s a tough, strong woman and that’s all I can say. ”

But the fight of a lifetime made Shields and Hammer the first female boxers featured on Showtime’s All Access YouTube sports channel.

“I just told myself stay cool, stay calm,” Shields said. “I did everything I wanted to do. I beat her every round.”

She called out 154-pound star Savannah Marshall, the British boxer who handed Shields the only loss of her career at the 2012 Women’s World Championships in Qinhuangdao, China.

Shields changed into an all-pink outfit when she met Hammer on a dais and told her to keep her head up because she was a great champion. With enough belts on display to fill a jewelry store display case, Shields is now tops in women’s boxing.

“I’ve earned all these titles,” she said. “I’ve earned to be called the greatest of all time.”