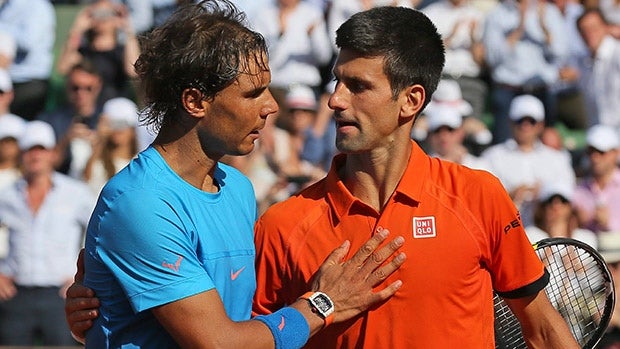 MONACO — As Novak Djokovic begins his preparations for a fourth straight Grand Slam title, he likes to imagine beating Rafael Nadal in the French Open final.

“That would be the match of the season, yes,” Djokovic said Sunday at the Monte Carlo Masters. Djokovic and his longtime rival Nadal are starting their clay-court seasons this week at Monte Carlo, their first tuneup on clay ahead of the May 26-June 9 French Open in Paris, and which could see them meet for a 54th time if they reach the final.

Toppling Nadal at Roland Garros, where the Spaniard is the defending champion and a record 11-time winner, is what Djokovic really wants.

It’s something Djokovic considers “one of the ultimate challenges of the sport” — much like facing Roger Federer during his grass-court prime at Wimbledon. They are the three most successful players in Grand Slam history: Federer has won a record 20 majors, Nadal 17 and Djokovic is catching them up with 15.

The top-ranked Djokovic has won the past three majors in straight sets, including a stunning rout of Nadal in the Australian Open final this year. He also has a 28-25 winning record against Nadal — a considerable achievement in itself.

Yet despite all the positive points stacked up, he considers Nadal a different and much more dangerous opponent at this stage of the season.

“I think Rafa is always a very clear favorite on any clay court in the world, and it doesn’t change,” Djokovic said. “He’s still there. I mean (it) obviously depends how he’s feeling physically. I have seen him (training) here, he’s been here a few days. Seems like he’s fine.”

Djokovic referred to Nadal’s troublesome right knee, which flared up again last month and forced the second-ranked Nadal to pull out of his eagerly-awaited semifinal against Federer at Indian Wells.

That was on hard courts, however, and clay is kinder to the 32-year-old Nadal’s battered knees.

Nadal has won Monte Carlo 11 times, also a record. His 46-match winning streak in Monte Carlo — broken by Djokovic in the 2013 final — is the most consecutive wins at a tournament by any man or woman.

Both players have byes to the second round here, and are due to play Tuesday or Wednesday.

Nadal faces either countryman Roberto Bautista Agut or John Millman of Australia, having not lost to them. Djokovic’s opponent is Taro Daniel of Japan or Germany’s Philipp Kohlschreiber, who has lost eight of 10 matches against Djokovic but beat him at Indian Wells.

After winning the Australian Open, Djokovic had a blip few saw coming when he failed to reach the quarterfinals at both Indian Wells and the Miami Open.

He has already shrugged off those losses, or at least slotted them into perspective.

“I was disappointed, because I thought I could go far. But at the same time I’ll try to look on the positive side,” the 31-year-old Djokovic said. “I’ve had great form the past 12 months. That can serve only as an incentive.”

Wawrinka, the 2014 champion, advanced with a 7-5, 6-3 win against Lucas Pouille — who has lost all his matches since being crushed by Djokovic in the Australian Open semis.

Coric beat Hubert Hurkacz of Poland 6-4, 5-7, 7-5 in damp and overcast conditions on the French Riviera, with heavy rain interrupting play early in the afternoon.