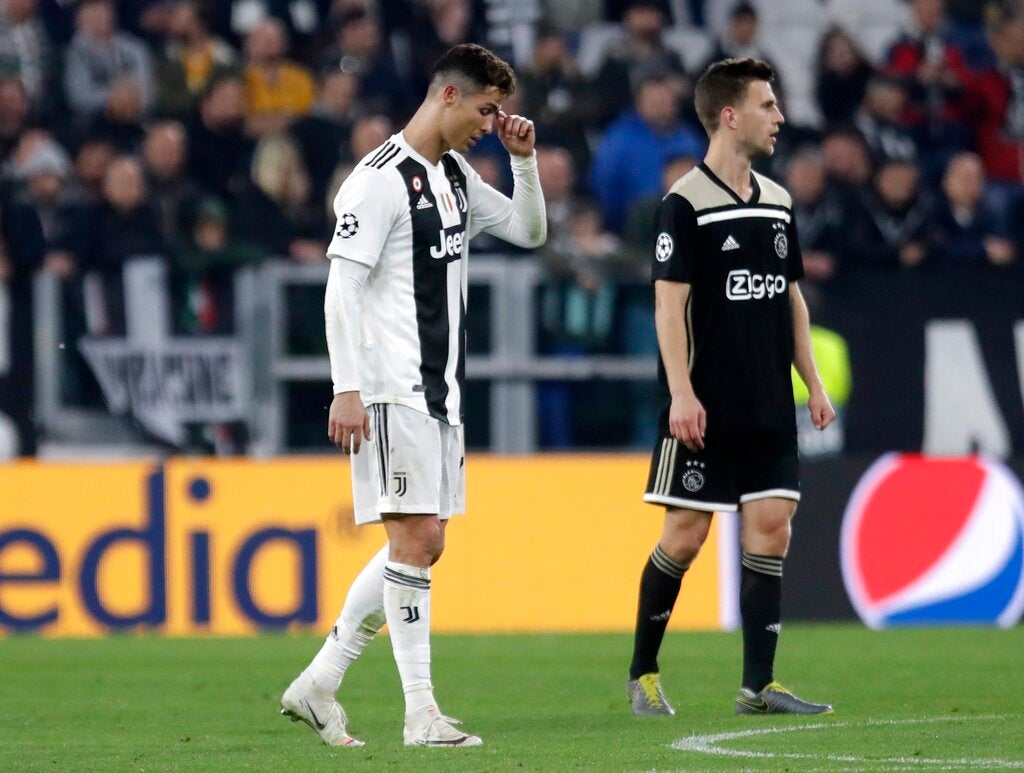 Juventus’ Cristiano Ronaldo reacts during the Champions League, quarterfinal, second leg soccer match between Juventus and Ajax, at the Allianz stadium in Turin, Italy, Tuesday, April 16, 2019. Ajax won 2-1 and advances to the semifinal on a 3-2 aggregate. (AP Photo/Luca Bruno)

TURIN, Italy— Cristiano Ronaldo shook his head as he walked off the field, while the Ajax players and staff celebrated with their fans long after the final whistle.

“He’s disappointed as we all are, but we can’t be dragged down by this disappointment,” Juventus coach Massimiliano Allegri said.

Juventus signed Ronaldo in the offseason in the hope of ending a 23-year wait for the Champions League but one goal from the Portugal star wasn’t enough against the Dutch team, which erased a first-half deficit and largely dominated the final 45 minutes.

“Cristiano increased our chances of winning the Champions League but football isn’t math,” Allegri added. “It’s not one plus one equals two, but one plus one can equal three, four, zero.”

Having already seen off Real Madrid in the previous round, Ajax showed no fear against Ronaldo and the Italian giant either, advancing 3-2 on aggregate.

“It’s an unforgettable night for Ajax, we eliminated one of the favorites for the competition,” Ajax coach Erik ten Hag said. “We played with confidence and patience. With our footballing philosophy we can go beyond expectation, we have once again surpassed our limits. It’s very difficult to play against us and our philosophy.”

Even going behind to a goal from Ronaldo in the first half didn’t faze Ajax’s young players as Donny van de Beek leveled shortly after and 19-year-old captain Matthijs de Ligt scored the winner in the second half.

Ajax will play either Manchester City or Tottenham in the semifinals.

Ronaldo’s old rival Lionel Messi is very much in contention, though, after scoring two goals to help Barcelona beat Manchester United 3-0 and progress 4-0 on aggregate in Tuesday’s other quarterfinal.

Ronaldo scored a hat trick in the previous round against Atletico Madrid to almost single-handedly overturn a two-goal deficit, and had also found the back of the net in Amsterdam. The 34-year-old Portugal forward added his fifth goal in three Champions League matches in the 28th minute on Tuesday, heading in a Miralem Pjanic corner.

But Ajax leveled six minutes later when Hakim Ziyech’s mishit shot turned into an assist for Donny van de Beek, who beat the offside trap to redirect it past Juventus goalkeeper Wojciech Szczesny.

Ajax grew in confidence in the second half and had a number of chances to take the lead, with Szczesny making a couple of stellar saves to keep the game level. But Juventus continued to look vulnerable without captain and key defender Giorgio Chiellini, and Ajax finally found its breakthrough in the 67th as De Ligt outjumped both Daniel Rugani and Alex Sandro to head in a corner.

It could have been worse for Juventus as Ziyech had a goal disallowed by VAR for offside.