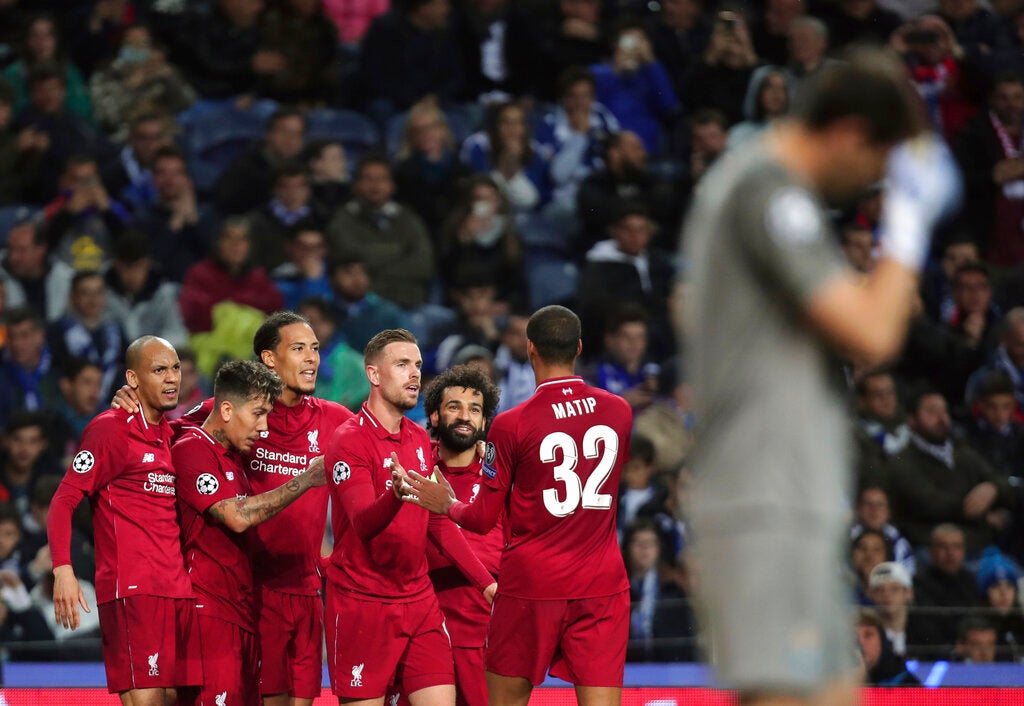 PORTO, Portugal — For the second year in a row, Porto had no answer to Liverpool’s attacking trio of Sadio Mané, Mohamed Salah and Roberto Firmino.

A year after the forwards scored all goals in a 5-0 rout of the Portuguese champions in the round of 16 of the Champions League, the trio combined again to lead Liverpool back to the semifinals of the European tournament.

They netted a goal each in a comfortable 4-1 win over Porto on Wednesday, with Virgil van Dijk also scoring as Liverpool advanced 6-1 on aggregate after winning the first leg 2-0 at home.

Liverpool, which lost in the final last season, will now face Barcelona, which eliminated Manchester United 4-0 on aggregate on Tuesday. Tottenham advanced on away goals despite a 4-3 loss at Manchester City in the other quarterfinal on Wednesday.

Mané had a hat trick at the Estádio do Dragão last season, with Salah and Firmino adding a goal each. The Senegalese player led the way again this time, opening the scoring with a 26th-minute goal that was confirmed by video review after being initially disallowed for offside.

Porto had started well and showed signs it might be able to reverse the first-leg deficit, but Liverpool took control after Mané’s goal and cruised to victory.

“We knew they wouldn’t be able to keep up the pressure of the first 30 minutes,” Liverpool coach Jürgen Klopp said. “In the second half Porto’s energy levels dropped, so it was easier for us to control the game.”

Liverpool had barely gotten close to Iker Casillas’s goal when Salah picked up a pass inside the area and sent a low pass to Mané, who came sliding in behind the defenders near the far post to score his 14th goal in 21 Champions League appearances.

Mané looked offside at first, and few Liverpool players complained when the flag went up, but video review showed he was in legal position before making his run to the ball.

“I was thinking it was offside, to be honest,” Mané said. “I was surprised.”

The goal hurt Porto’s morale and the team struggled to keep pushing forward. The pace slowed significantly and Liverpool took advantage, with Salah finding the net from inside the area after a pass by Trent Alexander-Arnold on a quick counterattack in the 65th.

Firmino, who came off the bench after halftime, and Van Dijk added to the lead with late headers — in the 77th and 84th minutes. Porto’s lone goal came through a 69th-minute header by Éder Militão, a defender who is joining Real Madrid at the end of the season.

Mané could have scored his second goal of the game in the 73rd but he missed an open net after dribbling past Casillas on a breakaway.

Porto, which eliminated Roma in the round of 16, had won all of its four home games in the Champions League this season, outscoring opponents 11-3.

After eliminating the Portuguese champions last season, Liverpool made it to the final and lost to Real Madrid.

Porto was boosted by the return of two key players who missed the first leg because of yellow-card suspensions: captain Héctor Herrera and defender Pepe, a three-time Champions League winner with Real Madrid.

“The result is unfair, but these things happen in football,” Pepe said. “We had a fantastic Champions League campaign.”

Klopp made a series of changes to the lineup from the first leg, revamping the midfield and using Firmino as a second-half substitute.