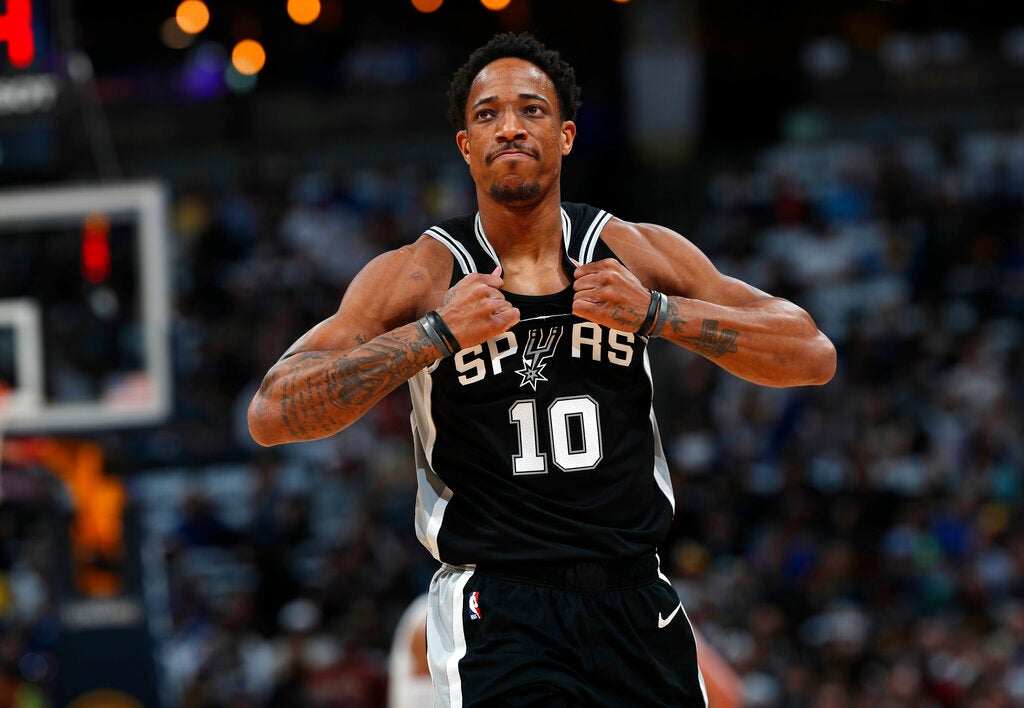 San Antonio Spurs guard DeMar DeRozan rips his jersey as he heads to the bench after drawing his second personal foul against the Denver Nuggets early in the first half of Game 2 of an NBA basketball playoff series Tuesday, April 16, 2019, in Denver. (AP Photo/David Zalubowski)

The Golden State Warriors are trying to regain the lead in a series they probably still can’t believe is tied.

Same with the San Antonio Spurs, who like the Warriors know they are facing an opponent who won’t stay down no matter how far they fall down.

The Clippers’ historic comeback against the Warriors, followed by Denver’s potential season-saving surge against the Spurs, made that clear.

So things are all even in those two Western Conference first-round series, which resume with a pair of Game 3s on Thursday night.

Philadelphia and Brooklyn play the other Game 3 of the night in an East series that also is tied at a game apiece.

Golden State would be up 2-0 if not for the Clippers’ colossal comeback — or the Warriors’ colossal collapse — on Monday night in Game 2. The Warriors led by 31 in the third quarter before Los Angeles charged back to win 135-131 after the biggest rally in NBA postseason history.

The Warriors won Game 1 by 17, appeared headed toward an even easier win in Game 2, and yet go into Game 3 basically starting from scratch.

“If you were up 30 with a quarter and a half to go, you just lose out of nowhere, it’s like somebody ran up to you and punched you in the guy and ran away,” Kevin Durant said. “It’s shock. I don’t even know how to explain it.”

The seventh-seeded Spurs took the series opener against a Denver team that was an NBA-best 34-7 at home during the regular season. San Antonio then was up 78-59 late in the third quarter of Game 2 before Jamal Murray’s 21-point fourth quarter carried the Nuggets to a 114-105 victory.

At least the Spurs, unlike the Warriors, can regroup in their home building, where the Nuggets haven’t won since 2012.

“It’s definitely not ideal to have a lead and then blow it like that,” Spurs forward LaMarcus Aldridge said. “We came in and definitely played a pretty good first half, but you know when you come on the road in the playoffs and you win one game on the road, that’s great. So we’ve got to go home and try to take care of business.”

A look at Thursday’s games:

NEED TO KNOW: After dropping the opener and leading by only one at halftime of Game 2, the 76ers finally looked like favorites by pouring in 51 points in the third quarter to roll to a 145-123 victory. Now they go to the home of the Nets, who have won Game 3 in their last three playoff series dating to the first round in 2014.

KEEP AN EYE ON: Joel Embiid. Even limited by knee soreness, he has double-doubles in both games to give him nine in his first 10 postseason games. Only Hall of Famers Wilt Chamberlain and Oscar Robertson had more.

INJURY WATCH: The Nets are listing veteran forward Jared Dudley as probable. His defense played a key role in the opener but he missed Game 2 with right calf tightness.

PRESSURE IS ON: Brooklyn’s starters. The bench helped carry the Nets after a slow start in Game 1, but the hole was too big to climb after the dismal beginning to the second half of Game 2.

NEED TO KNOW: With their Game 2 win, the Nuggets snapped a five-game skid to the Spurs in the playoffs that dated to 2007. They couldn’t afford to fall 2-0 given the Nuggets have dropped 13 straight in San Antonio.

KEEP AN EYE ON: Gary Harris. Sure, Murray scored 21 of his 24 points in the fourth quarter, and big man Nikola Jokic just missed his second triple-double of the series, but Harris chipped in 23. He flies under the radar.

PRESSURE IS ON: Aldridge and DeMar DeRozan. The tandem combined 55 points, but may need to take their game to an even higher level — if that’s possible. “We had control of the game. We just let the fourth quarter get away,” Aldridge said. “We didn’t execute defensively as well as we had the other three quarters and we let those guys get going a little bit.”

NEED TO KNOW: Lou Williams, the favorite for Sixth Man of the Year, is averaging 30.5 points and 10 assists in the series. Fellow reserve Montrezl Harrell has scored 25.5 points on 20-of-24 shooting.

KEEP AN EYE ON: Durant and Patrick Beverley. Beverley’s antics in defending the 6-foot-9 Durant are fun to watch, and having some success. Durant took only eight shots in Game 2 and coach Steve Kerr wants him to be more aggressive.

“The guy is the most skilled basketball player on planet earth,” Kerr said. “There’s nobody who can do what he can do. It’s the playoffs. Defenses are more locked in, they’re playing everybody tougher. I don’t know how many shots he got the other night, seven, eight. Absolutely he needs to be more aggressive. It’s the playoffs. He can get any shot he wants any time. I want to see him get 20 shots, 30.”

INJURY WATCH: With DeMarcus Cousins lost to a torn left quadriceps muscle, Andrew Bogut will step in to start for the two-time defending champions. He re-signed last month for a second stint with the franchise after playing for the 2015 champions and the ’16 team that won 73 games before losing to LeBron James and the Cavaliers in Game 7 of the finals.

“This is why we got him, just in case,” Kerr said.

In addition, Kevon Looney will see increased minutes. He scored a career-high 19 points on 6-for-6 shooting in Game 1 filling in for Cousins, who won’t require surgery for the injury. The big man returned in January from a nearly yearlong absence recovering from surgery for a torn left Achilles tendon.

PRESSURE IS ON: Golden State’s defense. The Warriors allowed 85 points in the second half of Game 2, too much even for their potent offense to overcome.