Ticket sales: The least understood side of the Olympics 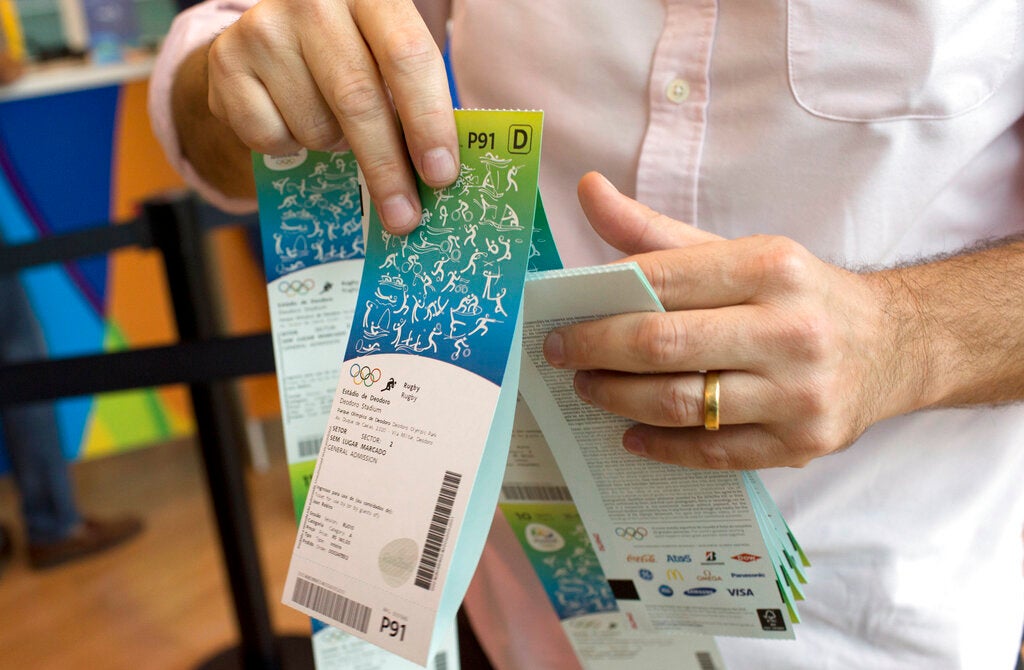 FILE – In this June 20, 2016, file photo, a man handles the Olympic tickets he just purchased at a shopping mall in Rio de Janeiro, Brazil. Tokyo Olympic organizers launched their ticket website on Thursday, April 18, 2019, which is where only Japan residents can buy tickets when they go on sale on May 9. The site can also be accessed by people outside Japan, where basic prices are listed. But they can’t buy there. (AP Photo/Silvia Izquierdo, File)

The now-retired Kitajima helped Tokyo Olympic organizers launch their ticket website on Thursday, where only Japan residents can buy tickets when they go on sale in the host country on May 9. But the useful site can also be accessed in English by people outside Japan, where basic prices are listed along with the full competition schedule.

But you can only start to buy if you’re a Japan resident.

To purchase tickets, everyone else in the world has to contact what are known as “authorized ticket resellers,” which operate in most major countries. They can’t start selling tickets until June 15 and they are also listed on the website.

Buying in the host nation — this time Japan — is straightforward with prices clearly set. But buyers outside Japan need to be careful. They will pay more; sometimes a lot more.

Under Olympic rules, ticket resellers are appointed by the local national Olympic committee. The reseller for the United States is CoSport, which also handles sales in Australia, Jordan and several European countries. Resellers can mark up the ticket price by 20 percent, which is termed a “handling charge.”

However, many sought-after tickets are packaged by resellers with top hotels and other perks, and the markups can be much more than 20 percent. These are aimed at the wealthy, hospitality packages and corporate buyers, for whom price is not always a concern. The resellers also run the risk of getting stuck with tickets they can’t sell.

CoSport, a division of Jet Set Sports and based in Far Hill, New Jersey, came under criticism at the 2016 Olympics in Rio de Janeiro. Not only did buyers have to pay the markups, but they were also penalized by the fluctuation in the exchange rate at that time in Brazil. That was not CoSport’s fault, but it pushed some prices up by another 50 percent to buyers outside Brazil.

“In case the resellers set inappropriate ticket prices, there will be some procedures we are getting into,” Suzuki said Thursday, speaking through an interpreter. “The most rigorous case is the ticket reseller might have their license revoked.”

If buyers outside Japan are patient and don’t rush to buy they may get some deals. It happened in Brazil. And it happened at the 2018 Pyeongchang Olympics.

Tokyo organizers will open sales globally in the spring of 2020, meaning any remaining, unsold tickets can be purchased at the prices offered in Japan. In Rio de Janeiro, many top tickets were unsold as the games neared, and some desirable tickets were put back into the pool after they were sold but never paid for.

Tokyo estimates it will have 7.8 million tickets to sell, with 20-30% dedicated to sales outside Japan. Organizers hope to generate about $800 million in ticket sales, a large source of revenue for the $5.6 billion privately funded operating budget.

Overall, Japan will spend about $20 billion to prepare for the games, and about 70 percent is public money.

Suzuki said the 7.8 million ticket number could change with stadiums and arenas still being configured for seating.

“We still lack information about the physical structure and layout of some of the venues,” Suzuki said. “This is the same with past games.”