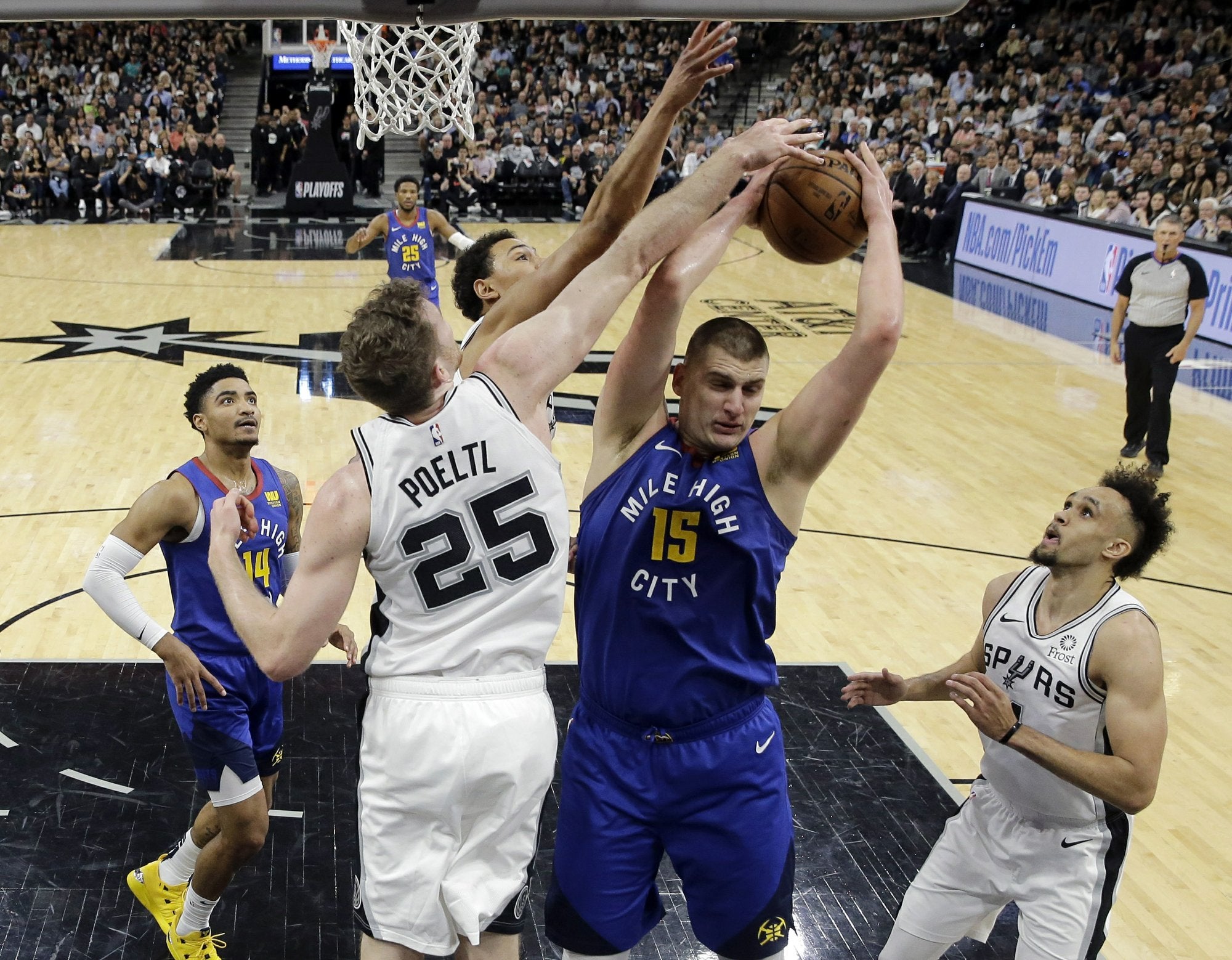 Denver Nuggets center Nikola Jokic (15) is defended by San Antonio Spurs center Jakob Poeltl (25) as he tries to score during the first half of Game 4 of an NBA basketball playoff series in San Antonio, Saturday, April 20, 2019. (AP Photo/Eric Gay)

“We can talk to we’re blue in the face about, ‘Hey, we’re going to hit them first,’ and all that,” Malone said. “Go out there and do it.”

The Nuggets did so, winning in San Antonio for the first time since 2012. Denver had lost three straight postseason games in San Antonio dating to their last playoff matchup in 2007 and had also lost 13 straight regular-season games on the road to the Spurs.

“It’s an unbelievable win,” said Paul Millsap, one of the few Nuggets with previous postseason experience. “I can’t put into words the magnitude of this win.”

Game 5 is Tuesday night in Denver.

The Nuggets were more aggressive and physical after a deflating Game 3 loss, which was expected. What wasn’t expected was the flat response by the veteran Spurs.

“The Nuggets competed and we did not,” San Antonio coach Gregg Popovich said. “Their physicality was obvious from the get-go. You knew that was going to happen and we did not respond. So, it was a very disappointing loss.”

LaMarcus Aldridge had 24 points and nine rebounds for the Spurs. DeMar DeRozan added 19 points before he was ejected with five minutes remaining after throwing a ball past an official and into the stands.

“Frustration,” DeRozan said. “I mean, I thought it was a bad call.”

Torrey Craig started over a struggling Will Barton and was charged with defending White to open the game along with Gary Harris, with Murray switching to Bryn Forbes. The moves proved beneficial, if not at first.

“He’s a really good defender,” Jokic said about Craig. “He’s helping us on defensive rebounds. So, he helps in that part of the game, and his defense is really phenomenal. And when he’s making shots like tonight, it’s a great job by him.”

White was limited to eight points on 3-for-8 shooting after going 15 for 21 on Thursday. Craig finished with 18 points, going 5 for 7 on 3-pointers. Barton finished with 12 points and made all three of his 3-point attempts.

“They executed their game plan better,” White said. “We kind of helped them out by playing awful.”

Down by 12 points in the first quarter, Denver outscored San Antonio 69-45 in the second and third.

“We did a really good job defensively, that’s what won us the game,” Murray said. “In quarters two, three and four, we got our run because of our defense because we all collectively rebounded. It was just a collective effort that led to our offense.”

San Antonio had 60 points in the pain, only two off its Game 3 total, but they had 11 fewer second-chance points and nine less Fastbreak points.

Spurs: San Antonio hosted its 200th playoff game and competed in its 400th overall, joining Boston, Philadelphia and Los Angeles (Lakers) as the only franchises with that postseason experience. … The Spurs have led after the first quarter in every game this series. … Aldridge made his 35th postseason appearance with the Spurs, one more than he did in nine seasons with Portland.

Game 5 is Tuesday night in Denver.