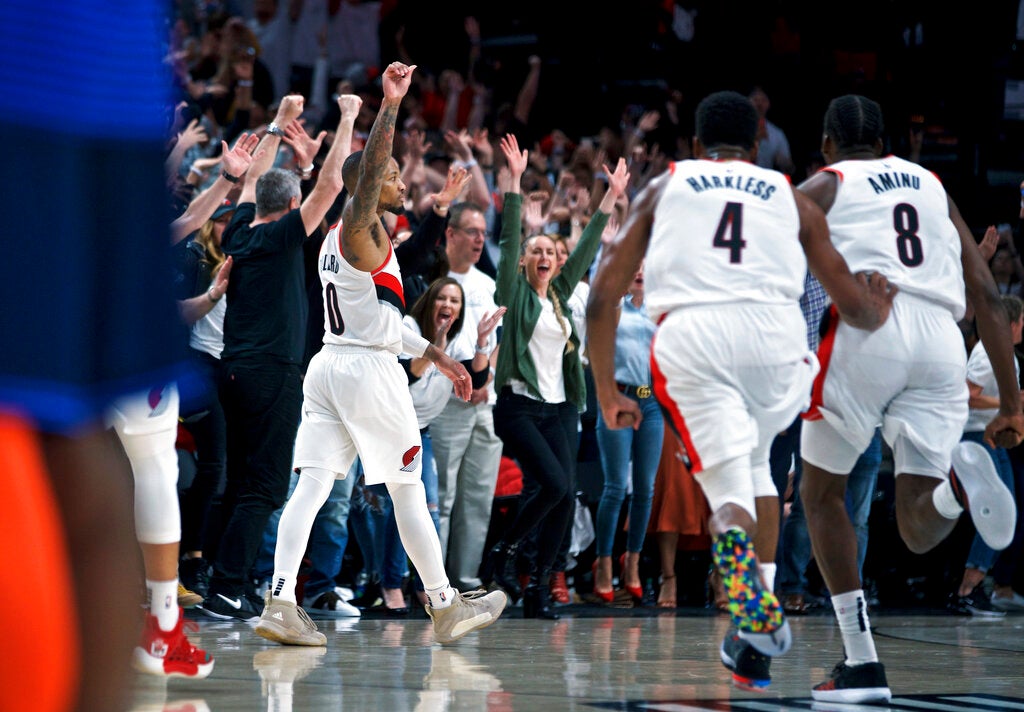 PORTLAND, Oregon — After Damian Lillard hit his walk-off 3-pointer to send the Trail Blazers along in the playoffs, he waved goodbye to the Thunder bench.

Lillard finished with a franchise playoff-record 50 points and Portland eliminated Oklahoma City from the postseason in five games with a 118-115 victory on Tuesday night.

Damian Lillard (50 PTS) buries the three for the #TissotBuzzerBeater and the @trailblazers advance to the Western Conference Semifinals with the 118-115 Game 5 victory! #ThisIsYourTime #RipCity#NBAPlayoffs pic.twitter.com/cVqLJkHLR4

With the game tied, Lillard dribbled just inside of halfcourt near the Blazers logo and then pulled up and hit the game-winner at the buzzer from 37-feet. After his wave, Lillard was mobbed by his teammates and the crowd chanted “MVP! MVP!”

Lillard finished 10 3-pointers, second-most ever in an NBA playoff game.

“All of those things that we did to give ourselves a chance to win were huge,” Lillard said. “And my part in it, I think, was probably my most important performance.”

Portland advances to the Western Conference semifinals to face the winner of the series between the Nuggets and San Antonio. Denver won 108-90 earlier in the night to take a 3-2 lead in that series.

It was the 12th straight road playoff loss for the Thunder, who have been eliminated in the opening round for three straight seasons.

Russell Westbrook had 29 points, 11 rebounds and 14 assists for his 10th career playoff triple-double and his second of the series. Paul George added 36 points.

"Sometimes it's your turn to go through something, and when you keep fighting, and keep working through it, and stay together… there's a reward waiting for you."@Dame_Lillard x #NBAPlayoffs pic.twitter.com/3gT0TeJGlg

“Very, very disappointing. It’s as simple as that,” George said. “We let this one slip away but it is what it is.”

Lillard had 34 points in the first half alone — more than Westbrook and George had combined (32) for the Thunder — but the Blazers had just a 61-60 edge going into the second half.

The Thunder led 90-88 going into the final quarter. Westbrook hit a 3-pointer to extend the lead while Lillard took a break on the bench.

Lillard’s 3-pointer pulled the Blazers within 108-103, but Westbrook answered with his own 3. CJ McCollum’s bank shot cut Oklahoma City’s lead to 113-109 with 1:39 left. Maurice Harkless added free throws to get the Blazers within two.

McCollum tied it with a jumper with just under a minute left, but George scored on the other end. Lillard’s layup re-tied it then Westbrook missed a layup with 18.3 seconds left to set up Lillard’s epic buzzer beater.

“I don’t care what anybody says that’s a bad shot,” George said about Lillard’s 3. “But he made it and that story will be told, but it was a bad shot. You live with it.”

McCollum finished with 17 for the Blazers and Enes Kanter had 13 points and 13 rebounds.

The Blazers stole one in Oklahoma City, winning 111-98 on Sunday. Westbrook went cold, finishing was 5 of 21 from the field for 14 points. He missed his final 10 shots. Lillard finished with 24, including 15 in the third quarter.

Portland was swept in the first round of the playoffs for the past two seasons, last year by New Orleans and the previous year by Golden State.

The Blazers last trip to the Western Conference semifinals came in 2016, when they beat the Clippers in the opening round before falling to the Warriors in five games.

The Thunder also got knocked out in the opening round for the past two seasons. In 2016, a year after missing the playoffs entirely, they went to the conference finals but lost to Golden State.

The Thunder went up 22-12 early, and George made his first six shots from the floor. Oklahoma City held a 37-29 lead at the end of the first quarter, but Lillard led all players with 19 points. McCollum got into foul trouble and headed for the bench.

Kanter, who became Portland’s starter when Jusuf Nurkic broke his leg late in the season, was clearly having trouble with his left shoulder. He came down hard on it late in the half and cried out in pain but he started the second half.

Kanter said afterward the original injury happened in the opening quarter and may be a separation. “We’ll see what happens,” he said, his shoulder wrapped.

Thunder: OKC coach Billy Donovan knew before the game what the Thunder were up against: “You throw everything you have into this game. It’s a matter of a collectively going out there to play to the best of their ability.” … The Tunder swept the Blazers in four games during the regular season.

Trail Blazers: Lillard has had 30-plus points 13 times in the postseason. His effort on Tuesday night surpasses his previous playoff high of 40 set against the Warriors in 2016. … Klay Thompson has the playoff record with 11 3-pointers in a game for the Warriors — also against the Thunder — in 2016. … Portland has won 11 straight at home in the regular season and playoffs. …

MORAL SUPPORT: The crowd roared in the final minutes when Nurkic was shown on the video scoreboard, cheering from the Blazers’ bench. It was the first time Nurkic had joined the team in the playoffs.

“You guys know it, you felt it in the building when they showed him on the big screen,” Blazers coach Terry Stotts said. “The fact that he showed up — no one knew he was going to show up. I honestly think we fed off that. There was a little good karma when he did show up.”