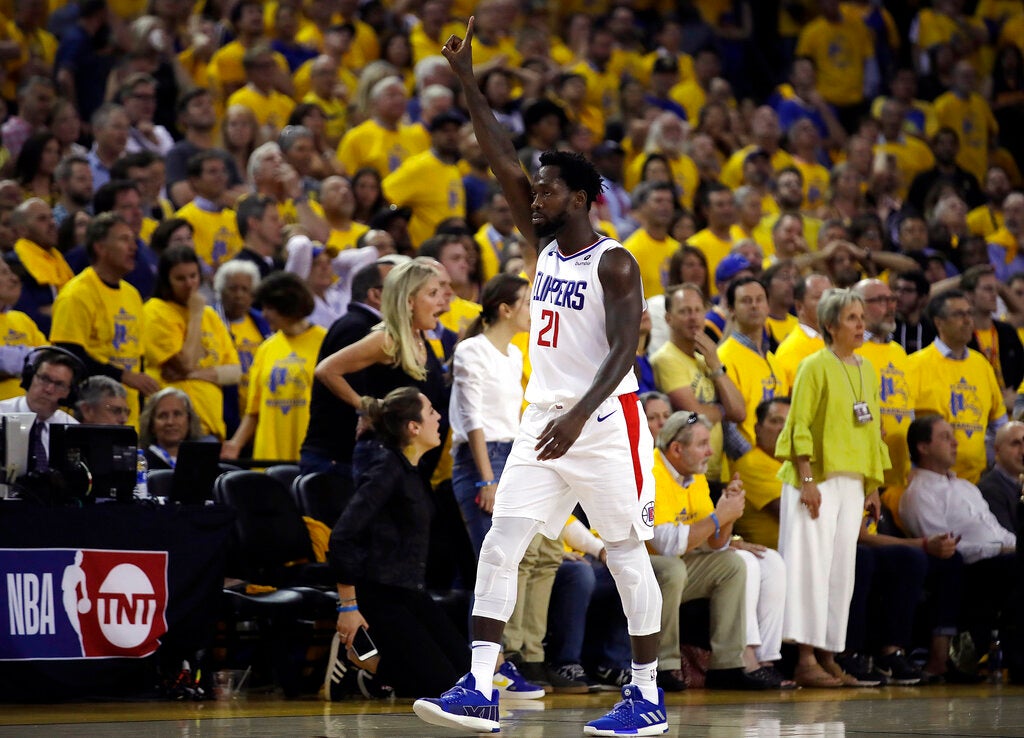 Los Angeles Clippers’ Patrick Beverley celebrates in the final minutes of the second half in Game 5 of a first-round NBA basketball playoff series against the Golden State Warriors, Wednesday, April 24, 2019, in Oakland, Calif. (AP Photo/Ben Margot)

OAKLAND, California— Lou Williams hit a fadeaway jumper with 1:29 left and finished with 33 points and 10 assists, the Warriors uncharacteristically clanked shots much of the second half and couldn’t make key stops, and the Los Angeles Clippers sent their first-round series back home with a 129-121 Game 5 win over Golden State on Wednesday night.

No clinch celebration just yet for the two-time defending champions, who lead 3-2 but needed far more than Kevin Durant’s playoff career-high 45 points.

The Clippers stymied Golden State’s comeback effort on the very court at Oracle Arena where Los Angeles rallied from 31 points down in Game 2 for the largest comeback in NBA postseason history.

Game 6 is Friday back in Los Angeles.

Patrick Beverley took a big charge against Klay Thompson with 1:40 left and scored 17 points for his best outing of the series.

Houston and James Harden are on to the second round and waiting for another chance at the champs. The Clippers said not just yet, they’re not done.

The Rockets, who squandered a 3-2 series lead to the Warriors in last year’s Western Conference finals, eliminated the Jazz with a 100-93 Game 5 victory at home a few hours earlier Wednesday.

Danilo Gallinari added 26 points and seven rebounds, and Montrezl Harrell had 24 points as the eighth-seeded Clippers are keeping things interesting until the end.

Durant made a four-point play to start the fourth and the Warriors had to rally much like the Clippers clawed back to overcome a 31-point deficit and steal Game 2 last week with the biggest comeback in NBA postseason history.

Durant raised his arm late and called on the Oracle Arena crowd for a major assist — the Warriors needed every little bit of help. Thompson’s 3 at 4:02 made it 116-114 and Durant tied it on a driving dunk the next time down.

Stephen Curry scored 24 points and Thompson 22 but Golden State didn’t have it on defense.

Durant shot 14 for 26 in his third performance of at least 30 points in the series and ninth 40-point postseason effort.

Gallinari hit a 3 out of the break then a free throw following Draymond Green’s technical and Los Angeles made it 81-66 on JaMychal Green’s 3 at the 9:09 mark and the Warriors called timeout.

Alfonzo McKinnie knocked down a 3 to end the first moments after he had left the court with Steve Kerr trying to sub in Thompson to play the final possession, but since Beverley — who’d been bleeding from a knock by Curry — stayed in the game the referees ruled McKinnie must return to the floor.

Nothing was going to keep Warriors forward Draymond Green from playing Game 5 — even his troublesome right wrist. An MRI showed no serious issues and he practiced fully Tuesday.

The wrist has been bothering him since the beginning of Game 3 when “I got a pretty good whack on it.”

“It’s still sore,” Green said at shootaround. “If the MRI said it was broken by the way I was still going to play. So it really didn’t matter.”

Clippers: Gallinari missed his initial four 3-point tries before connecting late in the first and finished 3 of 11 from deep. … The Clippers outrebounded the Warriors 42-39.

Read Next
Nets’ summer includes decision on D’Angelo Russell after playoff run
EDITORS' PICK
NBI, Immigration to join hunt for ‘underground’ medical clinics
2 Chinese nationals arrested in raid on another unlicensed COVID-19 hospital in Pampanga
Notice of 2020 regular meeting of stockholders June 18, 2020
Leveling up your ‘lutong bahay’ with the kitchen companion you never knew you needed
Duterte approves Metro Manila’s shift to GCQ starting June 1
SM prepares for ‘safe malling’
MOST READ
Duterte approves Metro Manila’s shift to GCQ starting June 1
Revillame tells Roque: ABS-CBN is in my heart despite being in rival network
NCR is ready for GCQ — Palace
Duterte: No reason for Richard Gomez not to accept healthy returning Ormoc residents
Don't miss out on the latest news and information.