Spurs looking for Game 7 vs Nuggets 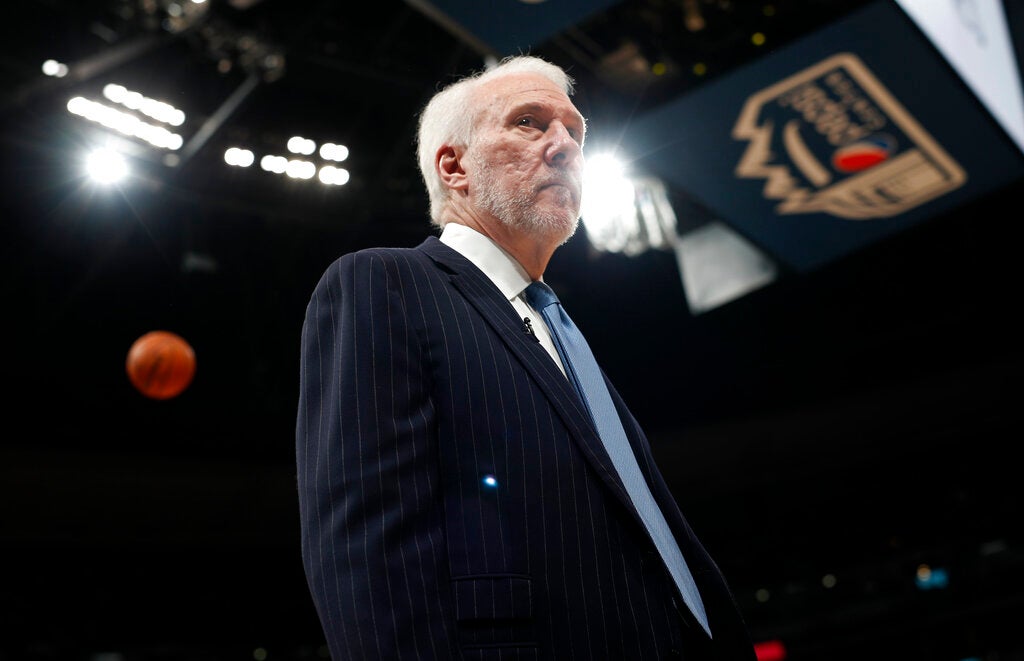 And he usually sticks around for a while.

The Spurs have never gone back-to-back years without a trip to the second round of the playoffs during the Popovich era. But the Denver Nuggets are one win away from changing that, as they’ll take a 3-2 lead into San Antonio for Game 6 of their Western Conference first-round series on Thursday night.

It’s the only game on Thursday’s NBA schedule.

It’ll also be nothing like most of these Nuggets — playoff neophytes, for the most part — have ever experienced.

The second-seeded Nuggets are looking to advance to a West semifinals matchup against third-seeded Portland; the seventh-seeded Spurs are trying to send this series back to Denver for a winner-take-all Game 7 on Saturday night.

“Leave it all out there,” San Antonio forward LaMarcus Aldridge said of the Spurs’ mindset going into Game 6. “Nothing to lose right now, go play your game, be confident, come ready to go to war. Let’s make it a dogfight, let’s play confident, and let’s just take our shots with confidence. And if they don’t go in, they don’t go in.”

The Spurs were ousted in five games from the first round last year by eventual champion Golden State. The last time San Antonio lost consecutive first-round series was in 1991 and 1992, long before Popovich took over and back when those opening matchups were best-of-five.

Denver, meanwhile, is looking to buck some history as well.

The Nuggets are trying to get to the second round for just the second time in the last 25 seasons; they went to the West finals in 2009, lost first-round series in 10 other seasons during that stretch and failed to qualify for the postseason in the other 14.

“We’ve grown up a lot and we still have a lot more,” said Nuggets coach Michael Malone, whose team has taken three out of four since dropping Game 1 at home. “A close-out game is the hardest game that many of our young players will ever play in, especially against a team like San Antonio.”

In Popovich’s 22 full seasons (excluding his first year, where he took over 18 games into the season), the Spurs have 22 postseason trips. That streak is tied for the longest in NBA history and more than triples the second-longest current run of postseason appearances — Golden State and Houston have both been there in seven consecutive seasons.

Out of that 22-year run by the Spurs, Popovich has endured a first-round exit only five times.

The NBA moved up the start of the second round because all four first-round series in the Eastern Conference ended quickly.

Portland’s series against the Denver-San Antonio winner will begin Monday, regardless of when the Nuggets-Spurs matchup ends. The other Western Conference semifinal series between Houston and the winner of the Golden State-Los Angeles Clippers series will begin Sunday — if the Warriors oust the Clippers in Game 6. Otherwise, the Rockets’ second-round series will start Tuesday.

NEED TO KNOW: Denver has a chance to advance in the postseason for the first time since 2008-09. In that season, Carmelo Anthony and Chauncey Billups led the Nuggets to the Western Conference finals before losing to the Los Angeles Lakers. … The Nuggets have made 60 3-pointers, their most in any playoff series in franchise history. … The Spurs overcame a 3-2 series deficit against New Orleans in 2008, winning Game 6 at home before taking the clincher on the road.

INJURY WATCH: Nuggets guard Jamal Murray was wearing an ice pack around his right shoulder after Game 5, but insisted he was fine.

KEEP AN EYE ON: Jokic. The Nuggets’ big man is averaging 19.6 points, 11.6 rebounds and nine assists in the series. “We do have to make him more uncomfortable up top and not just let him pick us apart,” Aldridge said.

PRESSURE IS ON: Derrick White. The Colorado native and Spurs point guard has been bottled up since Gary Harris began guarding him in Game 4. White went for 36 at home in Game 3, leading to the Nuggets to make a defensive switch. He’s averaged 10 points in the two games since, and the Spurs need him to adjust. “He’s growing and every night is an education, whether he plays poorly or whether he’s great,” Popovich said.