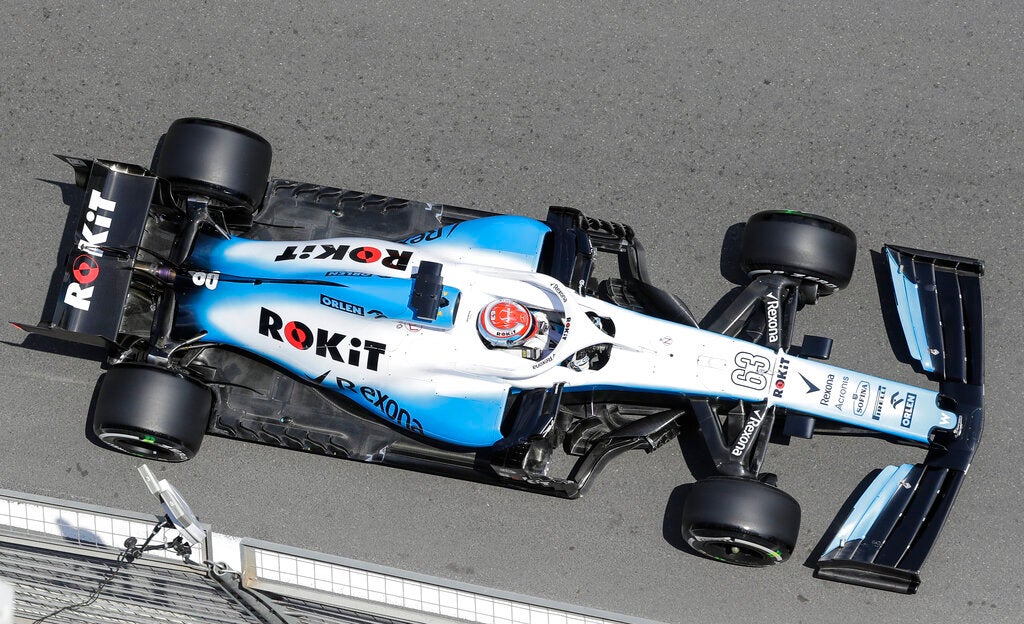 Williams driver George Russell of Britain steers his car during the first free practice at the Baku Formula One city circuit, in Baku, Azerbaijan, Friday, April 26, 2019. The Azerbaijan F1 Grand Prix race will be held on Sunday. (AP Photo/Sergei Grits)

BAKU, Azerbaijan — A loose drain cover disrupted the Azerbaijan Grand Prix’s first practice session, which had to be abandoned after only two cars set a time on Friday.

Just over 10 minutes into the 90-minute session, George Russell was traveling at high speed when his Williams car hit the loose drain cover. The impact scattered fragments of the car’s floor across the track and forced Russell to stop.

Things got worse for Russell’s car when it was being taken back to the pits. The truck carrying it hit a bridge and fluid from its damaged crane flowed onto Russell’s engine cover.

“I don’t necessarily believe it’s probably anybody’s fault, but still it’s pretty disappointing for us. It just seems like it’s one thing after another for our team at the moment,” she said.

Championship leader Lewis Hamilton and his Mercedes teammate Valtteri Bottas hadn’t left the pits before the session was cancelled.

Crews of marshals worked on clearing up the debris and reattaching the drain cover, which was supposed to have been welded down, and laid cement dust to soak up the fluid from the truck. They also had to check other drain covers around the street circuit were secure.

The incident could put further strain on Williams’ tight budget. The team was already struggling with a shortage of spare parts.

It’s not the first time drains have caused problems, and Williams has been a regular victim.

Then-Williams driver Rubens Barrichello crashed at the Monaco GP in 2010 after a cover was dislodged, and Valtteri Bottas damaged his Williams in 2016 in the pitlane in Baku.

ADVERTISEMENT
Read Next
Air Force XI, Green Archers back in action
EDITORS' PICK
NBI, Immigration to join hunt for ‘underground’ medical clinics
2 Chinese nationals arrested in raid on another unlicensed COVID-19 hospital in Pampanga
Notice of 2020 regular meeting of stockholders June 18, 2020
Leveling up your ‘lutong bahay’ with the kitchen companion you never knew you needed
Duterte approves Metro Manila’s shift to GCQ starting June 1
SM prepares for ‘safe malling’
MOST READ
Duterte approves Metro Manila’s shift to GCQ starting June 1
Duterte: No reason for Richard Gomez not to accept healthy returning Ormoc residents
Revillame tells Roque: ABS-CBN is in my heart despite being in rival network
NCR is ready for GCQ — Palace
Don't miss out on the latest news and information.