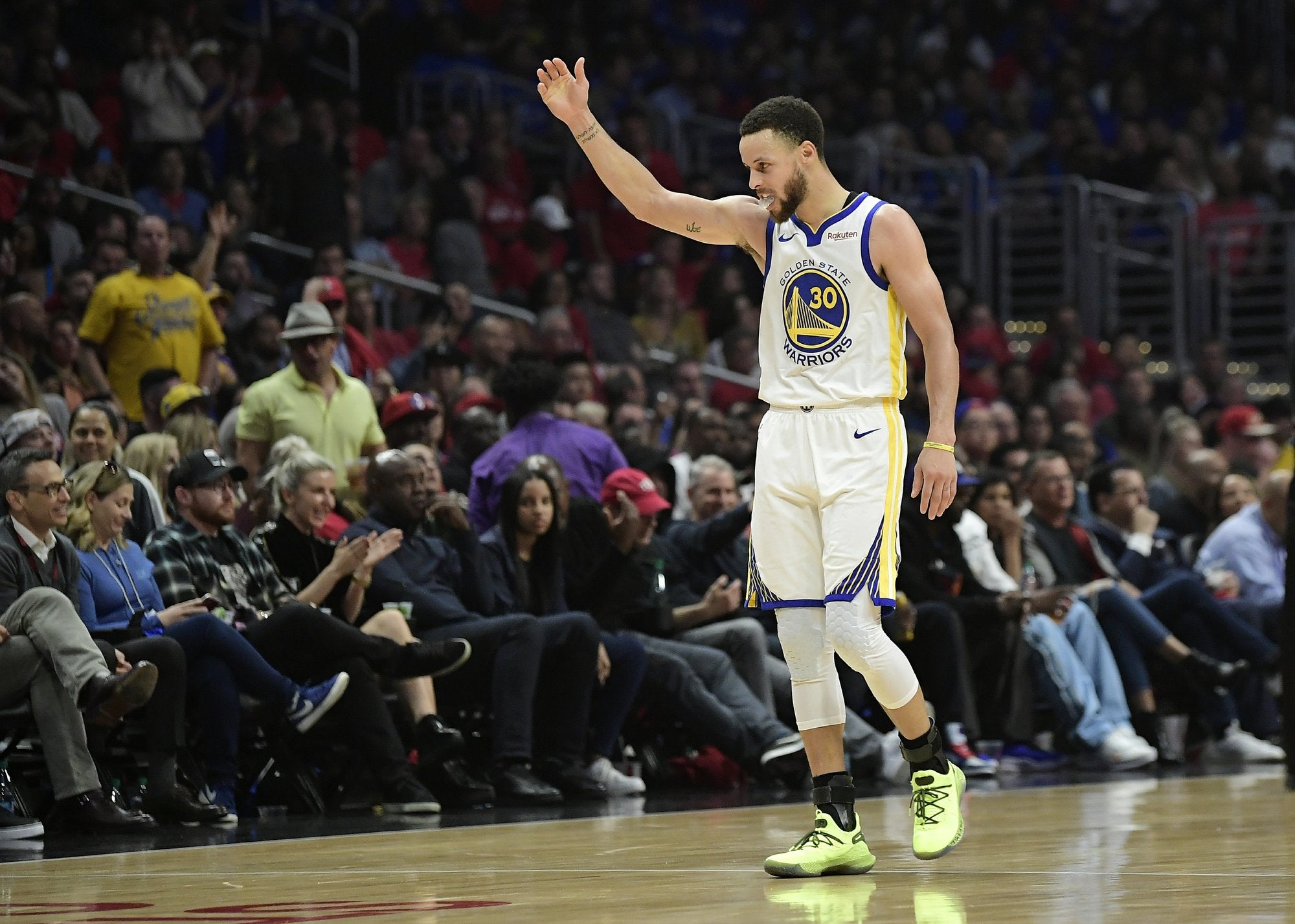 Golden State Warriors guard Stephen Curry eggs on the the crowd after scoring during the second half in Game 6 of a first-round NBA basketball playoff series against the Los Angeles Clippers Friday, April 26, 2019, in Los Angeles. The Warriors won 129-110. (AP Photo/Mark J. Terrill)

LOS ANGELES — After outlasting the no-name Los Angeles Clippers in six games, the Golden State Warriors have a superstar on their hands next.

James Harden and the Houston Rockets in a rematch of last year’s Western Conference finals. That’s when the Rockets let a 3-2 lead slip away and saw the Warriors go on to win their second straight NBA championship.

This time the teams meet in the West semifinals beginning Sunday in Oakland.

“We know them well,” Warriors coach Steve Kerr said Friday night after his team finished off the Clippers with a 129-110 victory to win the best-of-seven series 4-2. “They’re going to come after you and pick-and-roll. We know they’re already in the Bay waiting for us, so it will be a quick turnaround.”

Anticipating a Warriors’ closeout, the Rockets flew to Northern California on Friday to be ready for the series opener. They’ve been resting since Wednesday, when they defeated the Utah Jazz 4-1.

The Warriors were stretched to six games for the first time in the opening round in Kerr’s five seasons.

“One of the things that can happen during the playoffs is you can sharpen your game against an opponent that forces you to do so,” Kerr said. “We had leads in some games that we lost. Every time we thought, all right, we’ve got this, we didn’t have it.”

Kevin Durant had a statement game for the Warriors, scoring 38 of his playoff career-high 50 points in the first half at Staples Center. He was 15 of 26 from the floor, made 14 of 15 free throws and hit six 3-pointers.

Durant was coming off a 45-point performance in a losing effort in Game 5.

“No matter what anybody does, he can get a good shot,” Kerr said.

Harden averaged 27.8 points in the first round against the Jazz, but he struggled at times to get going offensively. His worst effort came in Game 3 when Houston won despite him missing his first 15 shots to set an NBA record for most misses to start a playoff game.

Durant believes Harden’s game is much more than drawing fouls and getting to the line.

“He can score in a variety of ways, so we have to be locked in from the beginning,” Durant said. “You can’t fully stop a guy like that; you’ve got to be ready to play him tough all game.”

Stephen Curry finished with 24 points, the only other Warrior with at least 20 Friday. Klay Thompson had nine points. Both of them were banged up slightly in the game, but Kerr said he’s hopeful they’ll both be good to go Sunday.

Draymond Green had his fifth career playoff triple-double of 16 points, 14 rebounds and 10 assists after not playing well in Game 5.

Warriors center Kevon Looney expects to see the Rockets employ some of the same defensive schemes used by the Clippers, who twice won in Oakland, including a 31-point comeback that was the biggest in NBA history.

“Defending the pick-and-roll is going to be huge,” Looney said. “The Clippers punched us in the mouth and woke us up. They showed us it’s not a cakewalk in the West. Every game is going to be hard.”