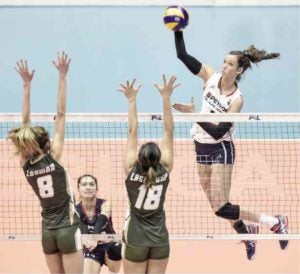 Stephanie Niemer of Petron will be a marked lady in this title series. —Sherwin Vardeleon

Petron and F2 Logistics, the most dominant teams in the Philippine Superliga Grand Prix, open their best-of-three title series Tuesday with the Blaze Spikers gunning to keep their amazing winning streak going at the Filoil Flying V Centre in San Juan.

Game 1 is set at 7 p.m. with the Blaze Spikers and the Cargo Movers clashing for the sixth straight time in the finals.

As an appetizer, Cignal and PLDT Home Fibr try to end their campaign on a winning note when they collide in the bronze-medal match at 4:15 p.m.

Bannered by the best imports and most reliable local players, both the Blaze Spikers and the Cargo Movers were heavily tipped to dispute the crown.

Petron soared to 14 straight wins in the classification before creaming Sta. Lucia in the quarterfinals and Cignal in the semifinals to move two wins away from sweeping the tournament, a feat it first achieved in the All-Filipino Conference in 2015.

But for head coach Shaq Delos Santos, previous records and statistics should be flushed down the drain as this finals series is an entirely different ball game.

“The sweep in the preliminaries is over. This is now a brand-new challenge for us,” said Delos Santos, who is no stranger to sweeping the conference as he served as assistant to George Pascua during that historic run in 2015.

F2 Logistics, on the other hand, blew hot and cold as it lost star setter Kim Fajardo to injury, as the Cargo Movers finished classification with an 11-3 mark.

The Cargo Movers survived the Power Hitters in the semis.