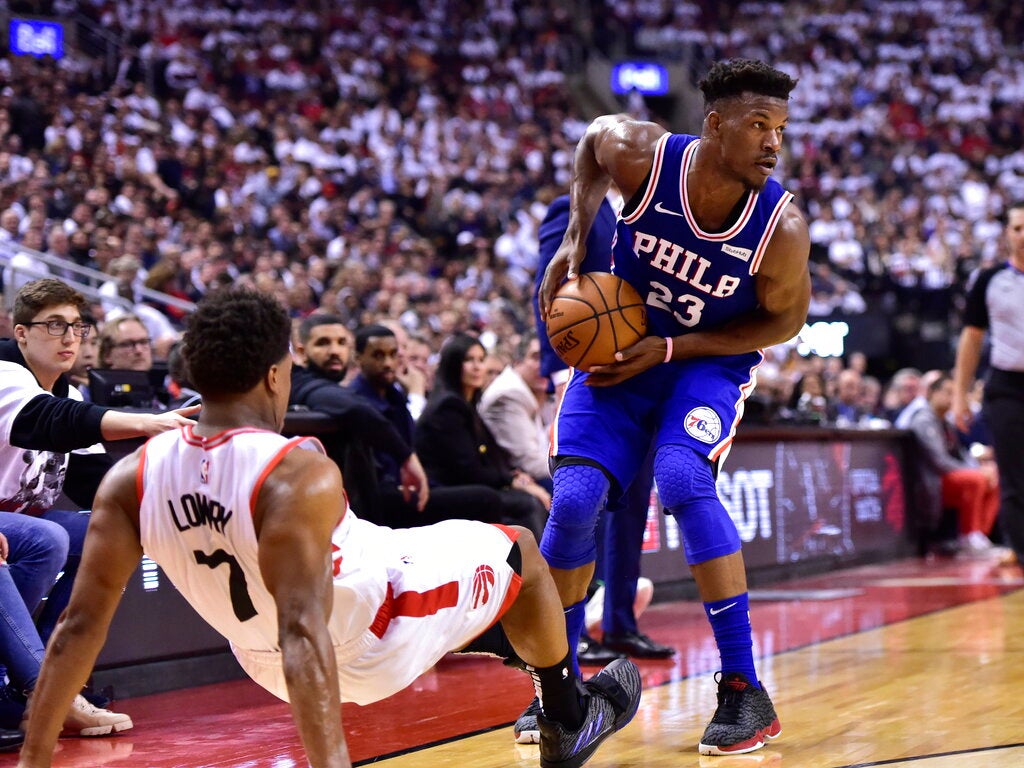 It was Philadelphia’s first win in Toronto since Nov. 10, 2012, snapping a 14-game losing streak.

“Everybody wants to paint the picture that we haven’t won here in however many years,” Butler said. “I’m just glad that we came out on top. We don’t care how many games we’ve lost, nothing like that.”

Butler scored 12 in the final quarter to help the 76ers withstand a late Toronto rally.

“He was just a tremendous rock,” coach Brett Brown said. “He willed us to a lot of different situations. He was a stud.”

“Jimmy Butler is a gamer,” Raptors coach Nick Nurse said. “He wasn’t going to be quiet this whole series.”

Game 3 is Thursday night in Philadelphia.

Down 19 in the first half, Toronto cut the deficit to one late in the third, only to go cold to start the fourth, missing six of its first seven shots.

The Raptors kept coming, however. Lowry made 3-pointers on both sides of a pair of foul shots by Butler cutting it to 90-87 with 1:36 to go. Toronto got the ball back, and Siakam scored on a layup to make it a one-point game, but Joel Embiid answered with a driving shot at the other end, restoring the three-point advantage with 24 seconds left.

After Lowry nearly turned the ball over, Danny Green missed a potential tying 3, and Philadelphia’s Tobias Harris came up with the rebound, his 11th. Harris was fouled and sealed it by making a pair with 3.9 seconds left.

“We got lucky there at the end,” Brown said.

Embiid scored 12 points in 32 minutes despite missing the morning shootaround because of flu-like symptoms. Brown said Embiid received intravenous fluids before the game.

“Full credit all over the place to Joel,” Brown said.

Embiid acknowledged feeling rough, but refused to sit out.

“There’s no way I was missing this game,” he said. “This game was really important to us. It doesn’t matter what I had, I was going to play.”

Kawhi Leonard scored 35 points, Siakam had 21 and Lowry 20. Toronto shot 10 for 37 from 3-point range and 33 for 91 overall as its franchise-record five game postseason winning streak came to an end.

“We didn’t play well tonight,” Lowry said. “They played really desperate and played super hard tonight and they got a victory.”

Toronto missed six of its first eight shots, matching the number of misses it had in the first quarter of Game 1, when the Raptors made 16 of 22. Toronto shot 7 for 24 in the first and missed its first seven from 3-point range before Norm Powell connected.

Butler scored six points for Philadelphia, who led 26-17 after one. Toronto got 17 from both Leonard and Siakam in the first quarter of Game 1, when they scored 39 points.

Ennis and Butler each scored seven points in the second and Philadelphia led 51-38 at the half.

Leonard scored seven more as Toronto used a 13-4 run out of the break to cut the gap to 55-51. Leonard had 11 points in the third and Siakam had seven. Toronto trailed 61-60 with 2:50 left in the quarter but Embiid made four free throws before the quarter ended and the 76ers took a 69-63 lead to the fourth.

76ers: Embiid only attempted one shot in the first half, a missed 3-pointer at 8:39 of the second. … Greg Monroe left in the third because of a sore left ankle and did not return. … Philadelphia had 13 turnovers in the first half, leading to 18 points for the Raptors. They finished with 20, leading to 24 points

Raptors: Siakam missed eight of his first 10 shots and finished 9 for 25. … Leonard shot 6 for 10 in the first half, while the rest of the Raptors shot 9 for 36. … Toronto held its opponent below 100 points for the sixth straight game.

Brown praised the maturity of Butler’s performance in his post-game remarks.

“This was James Butler,” Brown said. “That was the adult in the gym.”

Told of his coach’s comments, Butler offered a correction.

Philadelphia out rebounded Toronto 53-36, including a 27-11 edge in the first half.