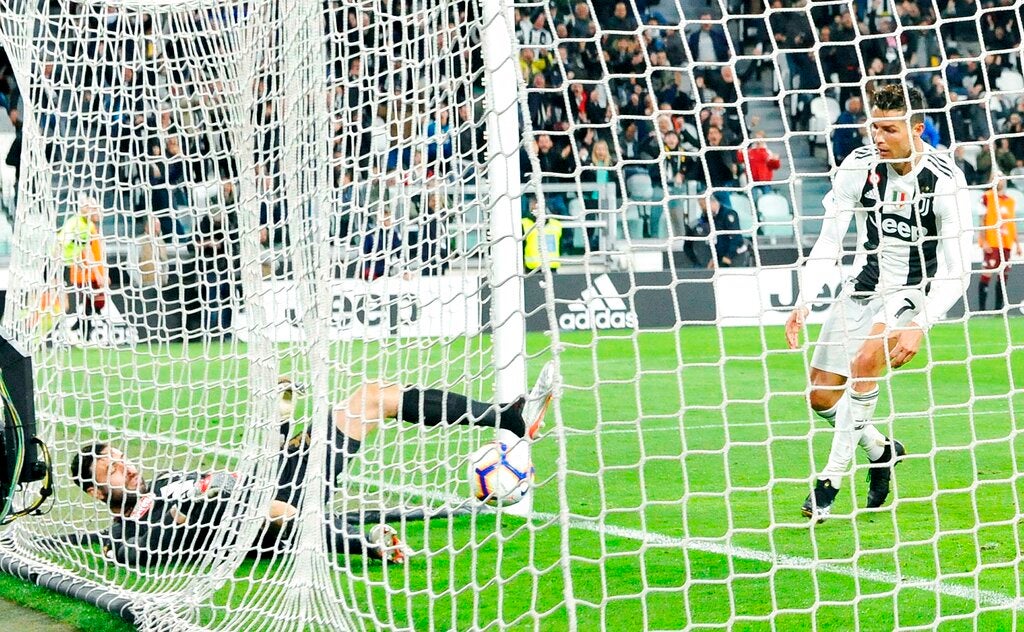 Juventus’s Cristiano Ronaldo reacts after scoring a goal during the Italian Serie A soccer match between Juventus FC and Torino FC at the Allianz Stadium in Turin, Italy, Friday, May 3, 2019. (Alessandro Di Marco/ansa via AP)

TURIN, Italy — Cristiano Ronaldo scored late as Juventus dented Torino’s chances of qualifying for the Champions League with a 1-1 draw in Serie A on Friday.

Torino remained sixth, two points below fourth-place Atalanta for the final Champions League berth, ahead of the rest of the weekend’s games. Juventus has already won its eighth consecutive league title.

“The draw burns. We were thinking of victory,” Torino coach Walter Mazzarri said. “Two or three times we could have scored the second goal and maybe brought the win home.

“There are still three matches left. We have to play them like we did tonight.”

The derby was moved ahead a day to avoid clashing with the anniversary of the 1949 plane crash in which 31 people died, including the “Grande Torino” team that had won five straight league titles.

“The ‘Grande Torino’ side represented the history of football,” Juventus coach Massimiliano Allegri said. “Tomorrow we have to commemorate this tragedy, which will always remain in everyone’s memory and heart.”

Torino took the lead in the 18th minute after Lukic muscled Miralem Pjanic off the ball on a Juventus throw-in and curled into the far side of the net for his first goal for the club.

However, Ronaldo headed Leonardo Spinazzola’s cross into the top right corner in the 84th minute for his 21st league goal, which moved him back into a tie for second behind Sampdoria striker Fabio Quagliarella for the most goals in Serie A this season.