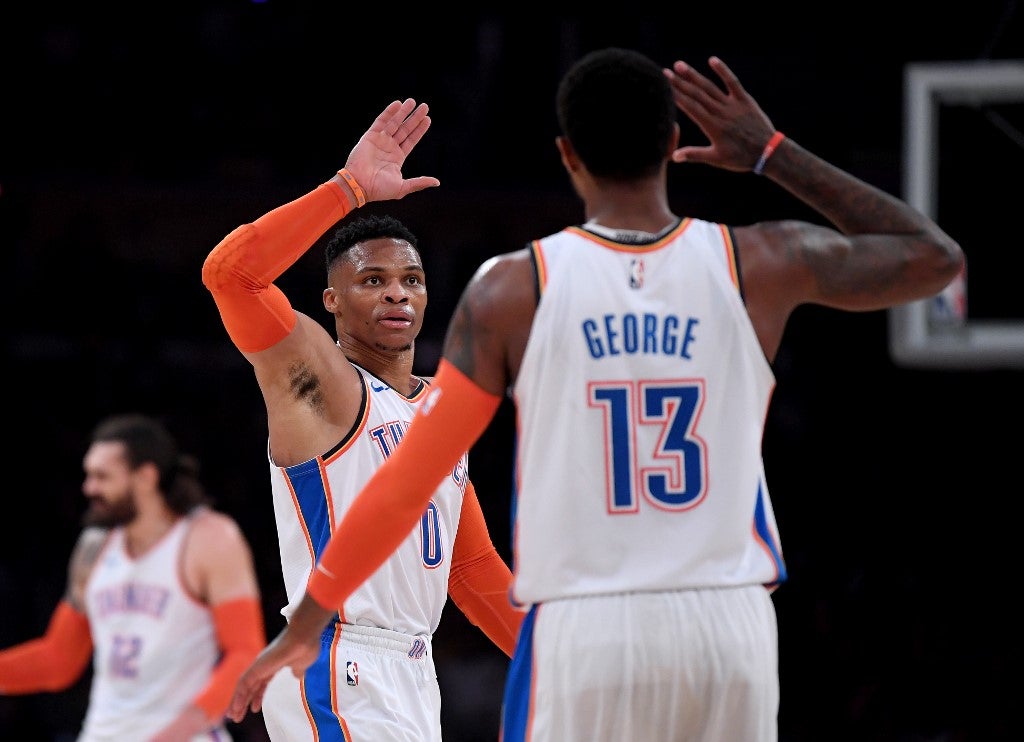 FILE – Russell Westbrook #0 and Paul George #13 of the Oklahoma City Thunder celebrate a dunk during the first half against the Los Angeles Lakers at Staples Center on January 02, 2019 in Los Angeles, California. Harry How/Getty Images/AFP

Oklahoma City Thunder stars Russell Westbrook and Paul George have both undergone successful surgeries to fix injuries ahead of next season, the club announced on Tuesday.

Westbrook went under the knife to repair a ligament in his left hand and had also undergone an arthroscopic procedure on his right knee, the club said.

The 2016-2017 NBA MVP is expected to be fit to return to basketball activities in three weeks, the club said.

No timetable was given for George’s likely return, with the club saying only that an update would be given ahead of the 2019-2020 season.

Westbrook and George were key figures once again for the Thunder this season before the team exited in the opening round of the playoffs.

Westbrook averaged a triple-double for the third consecutive year (22.9 points, 11.1 rebounds, 10.7 assists), the first player in NBA history to accomplish the feat.

Read Next
Nuggets on verge of Western Finals trip after blowout of Trail Blazers
EDITORS' PICK
A delightful blessing!
Legarda: Ending Violence Against Women, a cause for all
Gov’t eyeing COVID-19 vaccine booster for essential workers, indigents by Dec. 10
Gov’t plans to open COVID-19 vaccination for 5- to 11-yr-olds by January 2022
Omicron variant detected in more countries as scientists race to find answers
Villar Group gears up for AllValue Shopping Party on Dec. 3; around P 1-million promos and discounts up for grabs
MOST READ
Quiboloy warns of ‘much worse than Omicron virus’ if his ‘persecution’ is not stopped
Marcoleta defends pol ads on ABS-CBN
MMDA: Number coding during afternoon rush hours back this week
PH updates ‘red list,’ travel ban imposed on 7 more countries
Don't miss out on the latest news and information.