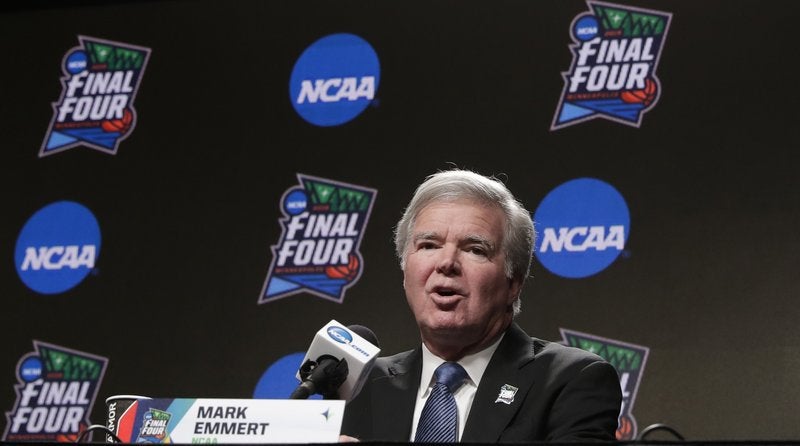 FILE – In this April 4, 2019, file photo, NCAA President Mark Emmert answers questions at a news conference at the Final Four college basketball tournament in Minneapolis. College athletes are continuing to function at high levels in the classroom but their Academic Progress Rate scores appear to be hitting a peak. The most recent statistics, released Wednesday, May 8, 2019, show this year’s overall four-year score matched last year’s record-high of 983 and that the four-year scores in football, men’s basketball and women’s basketball also matched last year’s marks. Baseball improved by one point to 976 while single-year scores at Historically Black Colleges declined slightly. “We are seeing some flattening of rates, which is not unusual given the large amount of data over a long period of time,” Emmert said in a statement. (AP Photo/Matt York, File)

Both rules could take effect next season in Division I. College basketball’s other two divisions would wait until 2020-21 to move the 3-point line because of the cost.

The Playing Rules Oversight Panel will vote on the recommendations June 5.

Rules committee members made their proposals after receiving feedback from the coaches who competed in the NIT each of the past two years, which used the international line on an experimental basis.

The international 3-point distance is 22 feet, 1.75 inches, a little more than a foot back from the current college line.

“Freedom of movement in the game remains important, and we feel this will open up the game,” said Colorado coach Tad Boyle, the committee’s chairman. “We believe this will remove some of the congestion on the way to the basket.”

The proposal for the shot-clock change was designed to improve the pace of the game, with the NCAA stating the committee believes the full 30-second clock isn’t needed when the offensive team securing the rebound already is in the front court.

As with the current rule, the clock reset would take place only when a shot has hit the rim.

— Assessing Flagrant 2 fouls, which include ejections, if derogatory epithets are used.

— Allowing coaches to call live-ball timeouts during the final two minutes of regulation or overtime.

— Expanding replay reviews to include basket interference or goaltending calls in the final two minutes of regulation or overtime.